Monsanto and Genetically Modified Crops - Is there a cover-up? 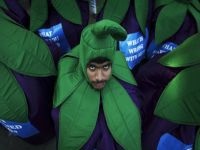 If we are what we eat, then we have a right to know the answers to these questions. And there are more. Why are cancers of the digestive system rising exponentially? Let us start with Monsanto's wonderful herbicide, Roundup.

The journal Current Microbiology has just released a report (1) on a substance called Glyphosate, created by Monsanto in the 1970s and used in Roundup. The report is shocking. It reveals that studies prove that Glyphosate is altering and destroying the micro-organisms in the soil, which has a potential effect upon the health of crops growing in it.

So devastating are the effects, according to the report, that some bacteria have disappeared from certain areas where Roundup was used to spray vast areas of land and apart from this, use of the product has spurred the appearance of superweeds, meaning that in turn farmers have to use greater and greater concentrations of the product. The soil is as a result being rendered barren for future generations.

Far more worrying are fears that the use of this herbicide is killing organisms whose benefit on a planetary scale has not yet been fully investigated and whose elimination from the ecological chain may have very serious consequences.

But this is just the tip of the iceberg. What happens to Glyphosate? It works its way down through the topsoil to the groundwater below and from there finds its way into our water supply - underground water currents and springs. This is not conjecture: virtually all rain samples tested in the USA contain Glyphosate.

What does the US Department of Agriculture do? Why, nothing! And this, despite the fact that other investigations have warned that Glyphosate can be carcinogenic, reducing fertility and increasing risk of cancer because it is genotoxic, damaging the DNA chain.

The problem is not only restricted to the USA. Superweeds have lasting damaging effects upon the soil and nowadays already cover millions of hectares in the USA, Argentina, Australia, Brazil, Chile, the EU and South Africa.

Cancer, infertility, barren land, destruction of DNA, destruction of micro-organisms which may be crucial for the planet's ecosystem, superweeds...what else? Well it appears we have been here before. In fact, Monsanto has just agreed to pay out 93 million USD for the effects of an explosion at its plant in Nitro, West Virginia involving the herbicide 2,4,5-T which contained the toxic agent dioxin. But there are still 80,000 property damage claims against the firm.

In fact, an investigation of the Nitro Residents v. Monsanto case reveals some horrific allegations which involve contamination of the environment, cover-ups, falsification of studies...you name it. But hey, as a government contractor, Monsanto has always enjoyed government immunity in the USA.

And what was that about Monsanto not serving Genetically Engineered (GE) food in its own canteens? Well, when we take into consideration that Glyphosate destroys human kidney cells at concentrations 450 times lower than the concentration used in agricultural applications... and when we consider the very little information available on the real potential dangers lurking behind GE foodstuffs, it is hardly surprising.

What is unacceptable is that while the long-term effects of consumption of GE food are still not available, GE seeds are spreading round the planet on wind currents and on aquifers. Remember the respected scientist Arpad Pusztai?

Arpad Pusztai is an expert in biochemistry and nutrition who worked at the Rowett Research Institute in Aberdeen, Scotland. When he released information about his discovery that Genetically Modified potatoes create severe damage to the immune system and organs of rats, he was suspended, threatened with a lawsuit and handed a gagging order, while his findings were denied or distorted. The gagging order was later lifted and when he went public again there was a massive recall of products. The US consumer was, of course, the last to know.

Before I finish, a question: Why do mice, rats, geese, cows, pigs, elk and squirrels avoid eating GM foods when given the choice?

Who would like to be a Monsanto shareholder now? I sure as heck wouldn't.