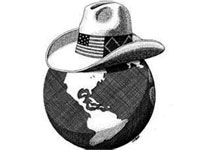 The term "New World Order" (Novus Ordo Mundi) has been used to refer to a new period of history evidencing a dramatic change in world political thought and the balance of power.

When we talk about New World Order we can say that everything is about hegemony and dominance of stronger countries over others. If we look back through history we can recount various attempts of several countries to create a New World Order or some sort of dominance among countries. Some of these attempts was led by great warriors such as, Alexander the Great (Macedonian Empire), Julius Caesar(Roman Empire), Genghis Khan(Mongol Empire), Napoleon Bonaparte (French Empire), Adolf Hitler, among others. From this we can see that every attempt to rule the world was needles and devastating.

We heard many theories and conspiracy theories concerning the New World Order, some of which include the USA and the UK wanting to form the Federal World Government, or the Illuminati (The People of The Light) believing that they are masterminds behind events that will lead to a New World Order, or that the Freemasonsare involved in the conspiracy to create a New World Order, or that international organizations such as the World Bank, IMF, European Union, the United Nations, and NATOare often listed as core NWO organizations, Black helicopters, among others. In my opinion, these theories will never take place because of strong disagreement from Russia, China and Islamic countries.

In regard to the above, in present times, we can see that even more countries are trying to dominate and create some sort of order among themselves by creating Unions and Alliances between them; like European Union, African union, Alliance of the USA, the UK, Australia and Canada, etc.

In the very near future, in order to survive, keep national identity and to maintain economy, costume and culture it is more likely that more Unions and Alliances would be formed to create a New World Order; bigger European Union with new member states such as: Macedonia, Croatia and Turkey. Union of Asian and Eurasian countries Russia, Mongolia, China and India, Union of Islamic countries from Middle East and Central Asia, Iran, Iraq and Saudi Arabia, stronger unity of African Union, Union of Central and South America; Panama, Colombia, Cuba and Venezuela, and eventually North American Union; USA, Canada and Mexico. After these Unions, we can expect even bigger ones. My vision is that they are going to look like this.

European Union (EU) led by supreme members Germany and Austria will expand to five more countries Switzerland, Norway, Serbia, Montenegro and Moldova. It is most likely that the EU will have problems with France and Turkey because of the pressure from Muslim countries from the South.

In order to maintain stability in the world, Union of Asia and Eurasia countries (UA) led by Russia, China and India will expand to Ukraine, Georgia, Armenia, Nepal, Bhutan, Sri Lanka and North Korea. South Korea and Japan will try to stay neutral while on the other side Pakistan, Azerbaijan, Tajikistan, Kyrgyzstan, Turkmenistan, Uzbekistan and Kazakhstan will try to form some sort of Union among themselves because of historic experience and influence from Russia and India. This Union will create struggle between Middle East and North Africa (MENA) and the UA but eventually will get them back to Russian and Indian embrace.

Because of enormous power of other Unions, Union of Islamic countries will transform it self in Union of Middle East and North Africa (MENA) and led by Iran and Saudi Arabia will enlarge to whole Middle East (except Cyprus and Israel), North Africa, Sudan and Afghanistan. In these circumstances, Israel will lose support from the USA and the UK. This Union will be one of strongest unions since it would be directed strictly by religion and desire to preserve their customs; also, it will become economically one of the strongest and one of the most influential Union since there is great number of Muslims in the EU and the USA. Turkey , France and Morocco will be the bridges of MENA to set influence on the EU.

The African Union will get weakened when it loses members from the North but eventually she will form new Sub-Saharan Union (SSU) which will become stronger, and finally place Africa on the right way. Because of the events in North Africa and new MENA Union, the SSU will prosper with great economic support from the EU, the UA and Great American Union (GAU).

Union of Central and South America will enlarge to the whole continent and they will join North America to create Great American Union (GAU). The USA will have great influence on other members through Mexico. This Union will be led by the USA in the North and Brazil in the South. This Union will make the USA to concentrate on the American continent and eventually stop supporting the UK and Israel, which will lead to the UK drawing closer to the EU and Europe; this would push the State of Israel to find a new way out, and for the USA to become independent from the two of them.

Countries from Southeast Asia like Singapore, Thailand, Indonesia, Philippines, etc. will become oasis for peace and world's largest tourist destinations. It is most likely that Japan and South Korea will join them.

Bigger Unions means bigger desires, desire to be first, to be biggest, to be strongest no matter what. These desires will create disorder among countries, and eventually will create war of the Nations; war that will destroy mankind and mark the beginning of a True World Order.