The planet’s magnetic poles are being displaced. Scientists say that mankind may eventually find itself defenseless against the cosmic radiation, and the Earth will turn into the giant Hiroshima. 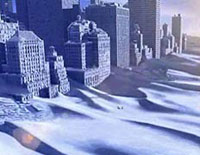 The chief scientist of the Central Military Institute for Ground Troops, Candidate of Technical Sciences, Yevgeni Shalamberidze, that that the geographic poles of the planet remain on their previous positions, whereas the magnetic poles have already drifted away 200 kilometers each. This phenomenon affects the processes of global scale.

“The planet relieves its excessive energy into space through crust fractures. When those breakouts close, the negative energy is left on the planet. It is not ruled out that the growing number of catastrophes that rocked the world during the recent years is based on the displacement of the magnetic poles,” the scientist said.

Alexander Fefelov, a senior spokesman for the Russian Academy of Natural Sciences, said that planet Earth would have its magnetic and geographic poles relocated during the upcoming years.

“Planet Earth on the orbit is a round object in weightlessness. The planet may suddenly change its axial inclination from time to time. It happens once in 23,000 years. The pole displacement angle may reach 30 degrees. The South Pole used to be located in the area of Easter Island before the latest displacement, whereas the North Pole was located in the Himalayas. That is why mammoths, rhinoceroses and saber-toothed tigers used to inhabit Arctic latitudes. It was a very sudden displacement of poles. Archeologists still uncover animals with indigested herbal food in their stomachs, which means that the animals died as a result of fast freezing, so to speak,” the scientist said.

The displacement of poles can result in the disappearance of the atmosphere, which in its turn will cool the planet to 273 degrees below zero Centigrade. The biosphere of the planet will virtually be killed in this case; only those located close to the Earth’s axis will survive the disaster.

Doctor of Physical and Mathematic Sciences, Vladimir Kuznetsov, said that planet Earth had experienced 16 polar displacements in 4 million years. “There is no chance that the Earth’s magnetic field will disappear. The planet will always have the radiation shield. Even a possible change of the poles will not be able to make the magnetic field vanish. The planet will not be frozen. The geomagnetic field does change, but it is not dangerous. Even if the poles drift hundreds of kilometers away, there will be no threat to humanity posed.