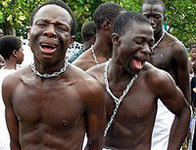 Slavery still remains one of the most shameful phenomena in the life of modern mankind. On December 20, Interpol released 140 children in Africa's Gabon. The children were forced to work in markets and were virtually used there as slaves. Some of the children were not even six.

Criminals kidnapped the children or bought them from parents in other impoverished countries before taking them to Gabon's capital, Libreville. The rescued children have already been sent to orphanages.

Gabon is one of the most stable countries on the African continent. It is rich with oil, gas, manganese and uranium ores. As for income per capita ($13,900 in 2009), Gabon follows Equatorial Guinea and Seychelles.

According to unofficial sources, slavery also prospers in the countries where it was canceled not so many years ago. For example, slavery in Mauritania was abolished in 1980. However, many things were left in the country unchanged. Slaves were freed, but they had no place to go, so they just stayed with their owners to work for them.

In Niger, slavery was officially canceled in 1995. However, Timidria, an anti-slavery organization, said that over 870,000 people were enslaved in the country in 2003. The government of Niger denies the existence of slavery, but Timidria says that there are at least 43,000 slaves in the country nowadays. Many of them are known as "sadako" - female sex slaves. According to the UN and human rights organizations, the situation with slavery is also hard in Sudan, Somalia and Angola.

Sergey Karamayev, a specialist for Afric,a said in an interview with Pravda.Ru that slavery in Africa is still widely spread.

"Officially, slavery does not exist anywhere in the world, but the real state of affairs is absolutely different. Slavery continues to prosper in conflict-stricken countries, such as Congo and Sierra Leone.

Practically all feuding sides use slaves' services. There are several categories of slaves there. Combatants, for example, carry weapons and even struggle on the side of their kidnappers. Another category of slaves deals with servicing - they cook, do the laundry, perform sexual favors and do other things. There are also workers. They can often be seen in remote areas, where they live in special enclosures, mines and diggings, which may belong to Western enterprises.

"Slavery exists in other countries of the third world. Slaves can be found in South and South-East Asia (Pakistan, India, Sri Lanka, Nepal, Burma), in the Middle East and in Latin America. Slave labor is used on all continents. The only exception is Antarctica," the specialist said.

In Europe, there are from 400,000 to one million slaves. First and foremost, it goes about sex slavery. Sex slavery is widely spread in the USA, Israel, Turkey and Hong Kong. In total, there are up to 30 million slaves in the world today. According to UN experts, one sex slave brings up to $7,000 of income to her owners monthly.