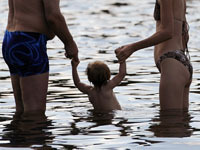 Traditional words 'father' and 'mother' will be replaced with official terms Parent 1 and Parent 2 in Britain. The terms will be used in official documents. The authorities decided to make such a "politically correct" move to accommodate same-sex couples. Experts are sure, though, that the matter is not about the requirements of certain social groups. The decision is another step towards the destruction of traditional families.

The words 'father' and 'mother' will be removed from British passport applications before December 2011. This became an achievement of Stonewall group, which defends the rights of sex minorities. The US State Department tried to do the same before, but it was eventually decided not to remove the two words from US passport applications.

The subject about novelties in the field of gender relations has been getting more and more popular recently. Not so long ago, Pravda.Ru wrote about the kindergarten in Sweden, which became world-famous after its administration decided to simply abolish the use of 'he' and 'she' pronouns.

Last year, the European Parliament published the brochure, which recommended not to use the words 'Missus' and 'Miss', 'Mademoiselle', 'Seniora' and 'Seniorita'.  From the point of view of the European parliament, the use of such words was discriminating against women because they directly indicated their sexual identity.

One does not have to be an expert to realize that such novelties in various countries are not just a coincidence. It is a trend, the goal of which is to change the public perception of the role of the sexes in the society.

Pavel Parfentyev, the chairman of the inter-regional public organization "For Family Rights" also shares this point of view.

"Indeed, this is a serious international trend. It started back in the seventies and the eighties as a powerful movement to defend the rights of sexual minorities. There were organizations that tried to defend even the rights of pedophiles, who, as they believed, also had the rights for their own sexual preferences.

"The organizations publicly said that their goal was to destroy family. Afterwards, under the pressure of public opinion, many activists decided to refuse from the openly sexual bias in their activities. They proceeded towards the protection of human rights. This is how they approach children's rights today. They think that children must be protected from the despotism of their parents - from any forms of traditional upbringing, that is to say. In order to accomplish that, one has to destroy the traditional family first and to make the family become a form that enslaves and binds children," the expert said.

In order to be more efficient, representatives of such movements began to cooperate with large international organizations such as the UN and the Council of Europe. This led to the creation of a small, albeit a very strong lobby for the protection of the rights of sexual minorities on the international level, Pavel Parfentyev believes. The lobby intends to distort the perception of traditional family in the modern society.

As a result, European officials already try to avoid the use of the word 'family' in top-level international documents. Instead, they use "family in all of its forms" expression, which implies all forms of cohabitation. As a matter of fact, they deliberately erode and expand the notion of family. The family as we know it has virtually disappeared from the new term.

"The lobby prefers to move in small steps. At first they say that one should not discriminate human beings on their gender rights and sexual orientation. It is hard to argue with this indeed. In Russia, there is no discrimination of real human rights on the base of sexual preferences. At the same time, they create special, previously unseen "rights" and preferences for homosexuals on the international level. As a result, they attach special importance to sexual orientation, which distinguishes a person and makes them stand higher than others," Pavel Parfentyev said.

The words indicating the sexual identity of people gradually disappear from official speech and documents. If they abolish 'he', 'she', 'father' and 'mother' they will not be able to abolish the gender per se. However, it can be possible to undermine the traditional perception of gender.

"A family is much more than a marital         union of two people. It is a reproduction mechanism for the whole society. The movements for the protection of rights of sexual minorities are trying to undermine the traditional or natural family, as we call it. They want to take it beyond the scope of public values. More importantly, they want to separate the process of procreation and childcare from marriage and family. According to them, children and parents are two different things that must exist separately from each other. They cast doubts on the special role of parents in raising children," the expert added.

Many people in Britain claimed that the above-mentioned novelties undermine family grounds in the country.