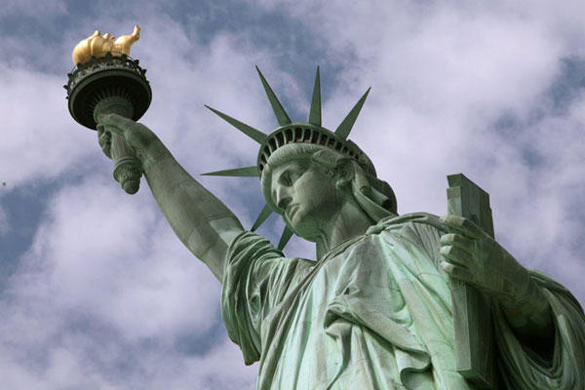 America and the West want to destroy Russia for a lot of reasons; five being - to put it clearly - eschatological:

- The spiritual reason: Russia is spiritually awake, having revivified its Orthodoxy. The decline of Catholicism in the West is thus counterbalanced by another Christian power. Remember the Masonic lemma of the nineteenth century: destroy the Cesar and the Pope. An atheist and nihilist west cannot endure the fact that a still powerful and Christian country resists; a Christian country that has too, like in the times of the tsar, an open and tolerant diplomacy.

- The sexual reason. It looks strange or unexpected, but Brzezinski en personne has insisted on it. Recently the socialist, despised and dishonoured government of France has sent a new ambassador at the Vatican. He was rejected because he was openly and pedantically gay. As we know western diplomacy is run by gays, and they cannot stand Russia and her alleged homophobia.

We shall be more specific on the following factors of western Russophobia:

- The messianic-imperialist reason: America rules Europe and it wants to rule Eurasia too. The project is to miniaturize Russia and to control the whole continent, via Ukraine, Kazakhstan and Russia. As we know it is now impossible; the insane yet perilous American strategy has reconciled China and Russia (see the analysis of professor Mearsheimer), and the Washington hawks would need a global atomic war to make these powerful challengers tolerate their foolish agenda. Yet Washington is brainwashed by its own propaganda, claiming that America is the messiah of modernity, freedom and openness, etc. Writes for instance Brzezinski, in the Technetronic Era:

Moreover, the very multinational and exceptional character of American society has made it easier for America to universalize its hegemony without letting it appear to be a strictly national one.

-  The Atlantic factor in Europe: Europe is an American intellectual colony since 1945 or even 1918 (Trotsky already quipped on that matter). One dangerous example: America has bred or conditioned near all Baltic politicians (read for instance in Wikipedia the gruesome data on President Thomas Hendricks Ilves of Estonia), American agents of influence who want to precipitate their tiny countries in a ruinous and ridiculous war against their gigantic neighbour. The Atlantic power bred a generation of European traitors, brainwashed in American universities or corrupted by American companies and foundations. This prospect has of course created a European resistance, Marine Le Pen and National Front in France, Beppe Grillo in Italy, Podemos in Spain, and the UKIP in England. Of course this local and somewhat impotent exasperation was already predicted and planned by Brzezinski:

"Today we are again witnessing the emergence of transnational elites, but now they are composed of international businessmen, scholars, professional men, and public officials. The ties of these new elites cut across national boundaries, their perspectives are not confined by national traditions, and their interests are more functional than national....The social elites of most of the more advanced countries will be highly internationalist or globalist in spirit and outlook. This, however, could create a dangerous gap between them and the politically activated masses, whose "nativism"- exploited by more nationalist political leaders-could work against the "cosmopolitan" elites.

Europe was sentenced to death by its American conquerors in 1945

As we know Europe was sentenced to death - or perennial slavery- in 1945 by her American conquerors. We will see if there is a reaction; but I am not sure of that. Merkel's Germany which has sold five nuclear submarines to Israel, submarines financed by German taxpayers and American colossal debt, paves the way to a tragic Endkampf. Let us quote on this matter Israeli historian Martin van Creveld (The Guardian, 9.21. 2003):

"We possess several hundred atomic warheads and rockets and can launch them at targets in all directions, perhaps even at Rome. Most European capitals are targets for our air force. Our armed forces, however, are not the thirtieth strongest in the world, but rather the second or third. We have the capability to take the world down with us. And I can assure you that that will happen before Israel goes under.'"

- The geopolitical reason: the American strategy reposes, like the English one, on McKinder and Spykman. I already commented these authors here (the first believes in land territory, the second in rims and highways...). The pivot area, the island of the world must be controlled at any cost. So Ukraine had to be destroyed as a country and as potential friend to Russia. Now Obama is ruling overseas a war with other naïve or dirtily humiliated countries - like Japan- to control China. American greater counsellor, polish-born Zbigniew Brzezinski (a false pole indeed, like Donald Tusk is another false pole and a pawn controlled by Washington and not polish people - look what happened to the Kaczynski brothers) wrote in his Great Chessboard that a break up of Russia was necessary -like a century ago a break up of China was to be enforced by western colonialist puissances. Let us read again Obama's mentor:

"A loosely confederated Russia-- composed of a European Russia, a Siberian Republic, and a Far Eastern Republic-- would also find it easier to cultivate closer economic relations with Europe, with the new states of Central Asia, and with the Orient, which would thereby accelerate Russia's own development. Each of the three confederated entities would also be more able to tap local creative potential, stifled for centuries by Moscow's heavy bureaucratic hand."

In the nineties, Brzezinski thus feared and rejected any Russian renaissance:

"It is also important insurance in case such a good relationship fails to develop, as it creates impediments to the re-emergence of any truly threatening Russian imperial policy."

And Brzezinski too knew the Ukrainian factor, the Ukrainian people being the poor victims of perennial and imperial western fantasy:

"The consolidation of a sovereign Ukraine, which in the meantime redefines itself as a Central European state and engages in closer integration with Central Europe, is a critically important component of such a policy..."

Nowadays anti-Americanism is considered a disease by mainstream media. Yet a great pope, when there still was a Roman Catholic agenda, Leon XIII, published a very important letter (testem benevolentiae) on heretic Americanism in January 1899, stating like Dostoyevsky in the Demons, that the source of any theological distortion, materialistic perversion and political destabilization was America -this was after the cruel and insane war waged on Spain and the conquest of Cuba and Filipinos. A malignant yet charismatic force, without of course now any reference to Christianity (American senator Dick Black acknowledges that Americans kill Christians anywhere), American chutzpah would be the last and hardest challenge of humanity.

And Russia is the main point of resistance; but not the sole.

And it was given unto him to make war with the saints, and to overcome them: and power was given him over all kindreds, and tongues, and nations.