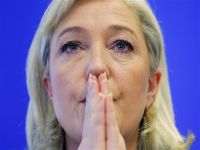 The national hero of France, Joan of Arc (1412 - 1431), is unforgotten. Joan said she had divine visions that instructed her to recover her homeland from Anglo-Saxon domination.

Marine Le Pen, France's leader of Front National, who is currently running as candidate for the presidential elections in April and May 2012, does not say where her visions come from, but they seem to tell her as well that France must be saved from Anglo-Saxon domination in the shape and form of NATO and the USA dominating and steering French politics to the detriment of her homeland.

Joan of Arc gained prominence when she overcame the dismissive attitude of French commanders and gained several swift victories over the Anglo-Saxon invaders from that misty island across the channel which had dared to occupy French territory repeatedly in the Hundred Years' War and which some French people still call "treacherous Albion" today.

Similarly, Marine Le Pen is storming against the dismissive attitude of the French ruling party UMP and the current president Nicolas Sarkozy towards the USA. He is making his daily kowtow in the direction where the sun sets, across the Atlantic, to that far away continent which is trying to impose its dominance not only on France but world-wide and which some French people name "l'empire du mal," the empire of evil.

Marine Le Pen is invoking Joan of Arc's memory by her firm opposition against the Anglo-Saxons' idea of a unipolar world. The USA does not only squat Europe, which is treated like a sort of US overseas colony or satrapy, but has gone global, demanding that all NATO countries, including France, must take part in a new Hundred Years' War against Iraq, Afghanistan, Libya, Syria, and Iran as next victim.

Marine Le Pen firmly opposes these belligerent aspirations of the USA, saying that under her presidency France will not participate in any of those wars.

Regarding the war against Libya, she regretted the haste of French diplomacy under France's president Sarkozy who prematurely recognized some rag tag mercenaries and foreign secret service men posing as "transitional council" speaking in the name of all Libyans.

She denounced US supremacy in the military intervention against Libya and refused "the idea that France slavishly followed the USA to this new stalemate".

All UMP and socialist delegates in France's National Assembly voted for the continuation of the war against Libya. Marine Le Pen trusts neither UMP nor PS, the Socialist Party, calling them UMPS, a mish-mash formed by the left and the right, dutifully serving the masters from overseas.

Front National, by the way, has no seat in the French National Assembly, although the party has many supporters, a fact which has caused Marine Le Pen to say that France is not a democracy but an oligarchy, where a few elites from the left and the right share the power and the spoils. The people of France are not truly represented in the French government.

In an interview for the leftist magazine, Marianne, which appeared in January 2011 with the headline "Afghanistan: Marine Le Pen wants to leave the US American orbit," she said, "With our systematic alignment to US interests we have lost the specific diplomatic line of France which could bring more peace to the world. We know very well that US economic interests are hidden behind the Afghanistan conflict, it was the same case in Iraq. Front National was against the war in Iraq and is against the war in Afghanistan.

Marine Le Pen promises that under her presidency France will regain its independence from the USA and immediately withdraw its troops from Afghanistan.

She has the same fearless and upright posture as Joan of Arc, appearing not in a shiny armor, but in stylish jackets and jeans. She has aptly named one of her daughters Jehanne, with the medieval spelling of Joan's name.

The French king at the time of Joan's birth suffered bouts of insanity and was often unable to rule.

We see a parallel today, when Sarkozy, who is often caricatured in cartoons as a new dwarflike king of France, seems to be suffering from bouts of delusion, losing all contact with reality.

Joan of Arc was born in a farmer's family in Lorraine. Marine Le Pen stems from an old, traditional fisherman's family in Bretagne. Incidentally, the word "Pen" in the Breton language means "Chief".

Marine the Chief is regularly badmouthed by the occupants of the Elysée in Paris, who use the mainstream media to attack her, pushing her into the "extremist" corner, trying to undermine her credibility and eligibility.
All the more refreshing it is to see readers' comments under these articles, defending her. Here are some samples:

"Marine has the strong support of the French people. More and more we rally to her cause. She is intelligent and brave. She will continue on her way. Yes, she can!"

"The French people are no dupes. They refuse to be manipulated by the government any longer. Our leader is Marine Le Pen. She is the hero of France."

"They are all morally foul and corrupted at the Elysée, Sarko first. Shame!"

"In 2012 we must get rid of this corrupt and weak political class governing us now. They are nauseating."

"Sarkozy sees that his voters' camp is melting away like snow in the sun. No wonder he's trying all kinds of tricks to block Marine Le Pen."

"Bravo Marine! She is the only one with a different approach to politics. To vote either left or right is like changing one's cabin on the sinking Titanic."

"I am neither left nor right, I am a French patriot," Marine Le Pen said in an interview for the TV station Fr5.

In her autobiography, À Contre Flots (Counter Currents), she describes her family, party and career. Marine Le Pen lives an extraordinary life, which may explain this woman's singular force and impact.

The book is truly a counter current to the lies diffused by the mainstream media propaganda, depicting her as a far right fascist, because the French elites want to prevent voters from electing her as the new president of France.

In the last weeks of her electoral campaign, Marine Le Pen has focused on her battle against globalization, which is destroying France.

She says she will leave the euro-zone, reintroduce the currency of the French Franc, reinstall custom borders and nationalize banks.

"What are the conservatives and the socialists doing?" she asks the public. "Nothing! They are busy fighting the Front National."

Her party is strong among blue collar workers, farmers and young people. Now it wants to attract more people from the middle class.

Marine Le Pen strikes a nerve when she speaks in front of huge audiences, chastising the elites in France's top positions. "Seven million French people live in poverty, and a quarter of the population is unable to support itself," she booms with her loud and strong voice. "That alone discredits the UMP and the PS, which have shared the power for too long, to the detriment of France."

Marine Le Pen is a trained lawyer and excellent orator, a clever and tough woman with a quick wit and a charming smile, yet her eyes sparkle icy cold when she attacks her main foes, Nicolas Sarkozy of UMP and Francois Hollande of PS.

She is slim, tall and blonde, well dressed, with a pleasant appearance and very much present in the media these days. Marine Le Pen is the star of political talk shows.

She is not afraid of a good verbal row, in fact she rather seems to enjoy it. Her audiences listen and watch fascinated as she bitch slaps her opponents with a barrage of pointedly formulated arguments, overriding them with her strong voice.

She is a sort of modern Joan of Arc and intellectual daredevil, but very popular at the same time with the masses of her working class fans.

Marine Le Pen has a feeling for the issues that are of interest to her audiences, picking up their moods like a seismograph and responding to them. With her talent of catching their fears of the moment, she is much faster than her male counterparts of UMPS in addressing topics of interest to the French.

She is picking up the French fears of bankruptcy, harping on the Euro. Since Standard & Poor's decision to downgrade the country's triple A sovereign debt, Marine Le Pen has made the restoration of France's economic sovereignty one of the central themes in her speeches. "The Euro will be a paragraph in history. It will collapse in the coming months. It will die on its own," she predicts.

Marine Le Pen sees Europe's sovereign debt problems as a "crisis with no solution" and wants to lead France out of the EU before it will be too late.

The Titanic shall sink without France aboard.