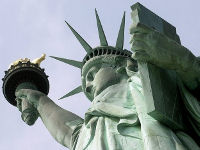 Americans live in the infinite now. They are happy not to be burdened with the knowledge of their past or the long-term future. Zbigniew Brzezinski, former national security adviser to President Jimmy Carter, says that Americans are totally ignorant of the world around them. America's leaders are not much better. He is right. The United States of America's priorities are distorted. "We the People" seems now an oddball concept. It's the threat era: China, Cyber, Climate, Terror, Drugs, Sequester, Avian Flu, Shooters and Insecurity

The Globalized world is a creation of the USA that began in earnest immediately following WWII. Is this a monster that has turned on the American people? Where did "We" go wrong? Why do Americans let it grind them up? What happened to critical thinking?

In this environment single issues explode, the difficult interconnected matters are avoided. "Let's let the next generation handle that." Gun ownership is more important than eliminating child poverty. Cutting taxes and letting cities like Detroit decay takes precedence over keeping people employed and out of the Hell of financial squalor, homelessness and suicidal thinking. "Protect the critical infrastructure!" say American leaders. Yet, Education and Human Security are absent from the list of America's critical infrastructure systems like the Defense Industrial Base or Electrical Grid.

So we see that the Donkey and Elephant have finally mated and live in the same house. They have proclaimed this time the Dawn of the Age of Austerity for America. To make it all feel better, one percent of Donkey's and Elephants are forsaking a year's salary. Wow! A fine example of sacrifice for the rest of the ragged population. Uncle Sam's America is being cut to pieces.

The US nation-state is being reduced to a national security mechanism to wage war and print money. Next up? Fire sales involving national parks and other "non-profit" national treasures will be sold off. The public education system, the backbone of the nation, will be dismantled for profit taking.

That is the real crisis that makes the financial barons and their media collaborators so anxious to cut Social Security benefits. They would like to get out of repaying the debt-that is, giving the money back to the people who earned it."

Speed and usage on the Net-WWW have accelerated but the issues remain the same as they were over 20 years ago. Orphan Nukes have been floating around the USA for many decades yet they are not discussed except within the confines of government. Then there is the failure of security planners on 415 in Boston. Like 911, officials play the blame game and pat themselves on the back for; well, not being accountable.

Terrorism has been part of American life since its founding. In fact, the Crime of the 20th Century took place in October of 1910 in Los Angeles. A bomb was detonated at the LA Times building killing 21 and injuring 100. No "shelter-in-place" was invoked back then. Americans must have been sturdier.

Until Americans start to look at their history and each other the downward spiral will continue. The Declaration of Independence, US Constitution and the Bill of Rights are fading away.