Absurdity of Western Russophobes has no limits

The International Olympic Committee will consider issuing sanctions against Yelena Isinbayeva, who has supported Russia's law banning gay propaganda among minors. With her help, the Western gay community and russophobes are trying to settle political scores with Russia. State Duma deputy Alexei Pushkov commented on the situation for Pravda.Ru. 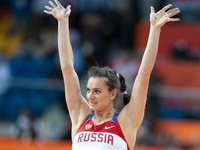 "I believe that the West is moving from persistent calls for Russia to build its political life, social values and legislation in accordance with their ideas to persecution for its political beliefs. If before association with "gay culture" was a matter of personal choice of each person and the attitude towards this culture was also a personal matter, now there is a policy of imposition of this homosexual culture on everybody.

"This is very noticeable in international organizations, it is very noticeable at the level of the European Union. The EU even sent out a circular to all its missions in Europe and outside of Europe, encouraging diplomats to participate in gay parades and gay rallies. For some reason, the European Union does not recommend participation in parades in favor of the disabled or elderly in their declarations, but recommends participation in parades in defense of sexual minorities that are not discriminated against in Europe.

"That is, we are dealing with a deliberate policy. Relevant resolutions are adopted in the European Parliament, in the Parliamentary Assembly. And if they were only advisory in nature ... I would not be surprised if Western structures gradually moved to the decisions that are binding, and in particular, sanctions against those who do not adhere to this "system of values."

"German Chancellor Angela Merkel has urged Russia to abandon the enactment of certain laws, even though I do not remember that the Russian government ever dared to tell the Germans what laws should exist in Germany and what should not. So I see it as persecution of freedom of opinion and the emergence of a new totalitarian ideology in the West - the ideology of aggressive liberalism.

"This also applies to sports. The fact is that any totalitarian ideology applies to all areas. It makes no distinction between the political sphere, sports, or public relations. In all likelihood, the West has a desire to impose their system of beliefs and convictions on everybody they can. That is, there is such a wholesome aggressive expansion of imposing their values ​​ system on other countries.

"I can predict that the success of this event will be limited, because, for example, they will not be successful imposing their values on countries with a Muslim population. They won't be successful in many other countries either. However, the West has made such an attempt, and sports, in particular, may experience the negative effects of this new totalitarian ideology.

"It is hardly likely that Russia's Sochi Olympics will be jeopardized, although a number of Western countries, including the United States, are leading hysterical campaigns in order to exert maximum pressure on Russia. In the U.S., the Sochi Olympic Games are compared with the Games in Nazi Germany in Berlin in 1936, although there are no grounds for this. However, the most unworthy methods are used to discredit the Russian Olympics. I think that it will remain at the level of ideological pressure, first of all, individual calls of individual public organizations to boycott the Olympic Games in Russia.

"We already know that neither in Europe nor in the U.S. a boycott would be supported by the legislature or the executive branches of the government. However, this does not mean that pressure will not continue. I think that it will increase. I repeat again: it appears that the West is moving from the doctrine of the freedom of opinion to the doctrine of suppression of freedom of belief."