The failure of German leadership: Merkel Whores For Washington

Washington, enabled by its compliant but stupid NATO puppets, is pushing the Ukrainian situation closer to war. 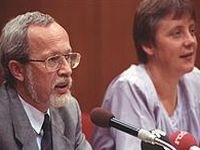 German Chancellor Merkel has failed her country, Europe, and world peace.  Germany is the strength of the EU and NATO.  Had Merkel said "No" to sanctions on Russia, that would have been the end of the crisis that Washington is brewing, a crisis unlikely to be ended short of war.

But Merkel has signed away the sovereignty of the German nation and assigned the fate of Germany to a province in the American Empire.  Thus has Merkel and the weak

Washington's mismanaged Ukrainian coup has cost Washington Crimea, which Washington wanted most of all in order to deprive Russia of its warm water naval base on the Black Sea.  In addition, the mismanaged overthrow of an elected government in Ukraine is threatening to also lose the Russian cities of eastern Ukraine.  Like Crimea, eastern Ukraine consists of former Russian areas that Khrushchev stuck into Ukraine in the 1950s.

In what is clearly a fruitless and pointless effort to get Crimea back, Washington is demanding that Russia interfere in Crimea and prevent Crimea from seceding from Ukraine.  If the Russian government refuses to follow Washington's orders, Washington has announced that it will inflict "damaging sanctions" on Russia.  Initially, EU countries expressed an unwillingness to go along with Washington, but with bribes and threats, Washington has conquered Merkel and has its European puppets lined up following orders.

Washington understands that economic sanctions are a far less threat to Russia than the loss of its Black Sea naval base. Washington also understands that Putin cannot possibly abandon the millions of Russians in eastern and southern Ukraine to the mercy of the anti-Russian and unelected government imposed by Washington in Kiev.  As Washington knows that its threat of sanctions is empty, why did Washington make it?

The answer is in order to drive the crisis to war. Washington's neoconservative Nazis have been agitating for war with Russia for a long time. They want to remove one of the three remaining restraints (Russia, China, Iran) on Washington's world hegemony.

Washington wants to break up the BRICS (Brazil, Russia, India, China, South Africa) before these countries form a separate currency bloc and avoid the use of the US dollar.

Russia will respond in kind to Washington's sanctions.  European peoples and Western banks and corporations will suffer losses.  It would be at least two or three years before Washington has in place means of delivering US natural gas achieved by fracking and contamination of US water supplies to Europe to take the place of Russia's cutoff of energy to Europe.

The Western presstitute media will dramatize the Russian response to sanctions and demonize Russia, while ignoring who started the fight, thereby helping Washington prepare Americans for war. As neither side can afford to lose the war, nuclear weapons will be used.  There will be no winners.

All of this is perfectly clear, just as was the obvious conclusion of the march of events leading up to World War 1.  Now, like then, the people who see the outcome are powerless to stop it.  Delusion rules.  Arrogance and hubris overflow. Statements and actions become ever more reckless, and then there is hell to pay.

Americans and Europeans, if they had any awareness at all, would be in the streets violently protesting the coming war toward which the insane criminals in Washington are driving the world.

Instead, the German chancellor, the French president, the British prime minister and the Western presstitute media continue to lie:  It was legitimate for the West to steal Kosovo from Serbia and to steal the Ukrainian government, but it is not legitimate for the Russian population of Crimea to exercise self-determination and return to Russia. Washington and its EU puppets even have the audacity to declare falsely, after overthrowing an elected government in Ukraine and installing an unelected one, that Crimean self-determination violates the Ukrainian constitution, which no longer exists because Washington destroyed it.

The criminally insane government in Washington has pushed the Russian bear into a corner. The bear is not going to surrender.

Author`s name Paul Craig Roberts
*
18:54
Ukrainian soldier uses chainsaw and fire to release US howitzer from ice trap
18:30
Onet: Ukraine will lose in six months due to shell shortage
14:17
Russians buy more than 50 tons of gold in 2022
13:34
USA's plan to give 20 percent of Ukraine for peace hoax
19:57
Russia will use all of its military potential to counter Western arms supplies to Kyiv
18:34
Biden changing strategy on Ukraine to reach diplomatic solution with Russia
17:36
Consequences of NATO's possible supplies of fighter jets to Ukraine get clear
15:16
Ukrainian forces suffer heavy losses while trying to cut across Dnieper
13:35
USA's next step is to suppress European economies
12:52
Victoria Nuland turns herself in about Nord Stream blasts
Medvedev: Ukraine as a state to be devastated, go bankrupt and be turned into colony