Russian and Syrian military aircraft have ceased the bombings of the city of Aleppo and its suburbs. The bombings were stopped on 10:00 MSK on October 18, Russia's Defense Minister Sergei Shoigu said, RIA Novosti reports. 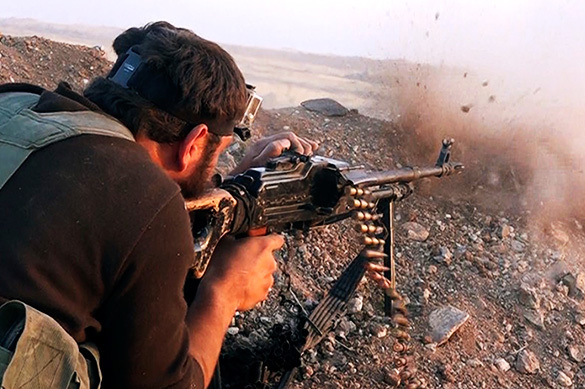 "The early termination of airstrikes is necessary for the introduction of a" humanitarian pause "on October 20. This will ensure safety for the exit of civilians via six corridors and prepare for the evacuation of sick and wounded people from the eastern part of Aleppo," Defense Minister Shoigu said.

He specified that starting from October 20, civilians will be able to leave Aleppo via six corridors, while militants will have two corridors provided.

The head of the Russian Defense Ministry did not specify the time period, during which the bombings of Aleppo would be stopped. At the same time, he urged the leaders of the countries that have influence on terrorists in the eastern part of Aleppo to convince the leaders of the armed groups to cease hostilities and leave the city.

The head of European diplomacy, Federica Mogherini, called Russia's decision on the "humanitarian pause" a positive move. At the same time, the US State Department found that Russia's decision came later than was required.

During the recent weeks, the situation in Aleppo has worsened considerably. The West accuses Russia of the bombings of the city, claiming that Russia and Syria carry direct responsibility for the deaths of civilians, including children. At the same time, Russia insists that the attacks are conducted against terrorists only. The Russian Defense Ministry takes all measures to avoid civilian casualties, Russian officials said.

On October 17, the EU Council posted a message on its official site saying that Russia's and Syria's airstrikes on Aleppo could be recognized as war crimes.

Russian Defense Minister Sergei Shoigu told reporters that by the beginning of the humanitarian pause, the Syrian troops would retreat to give militants an opportunity to leave the east of Aleppo via two special corridors: on Castello road and near the market of Souk El-Hai.

Shoigu said that all those interested in the stabilization of the situation in Aleppo, should start taking real political steps instead of being engaged in political red tape.

Earlier, Russia's permanent representative to the UN Vitaly Churkin stated that the UN Security Council's approach to the crisis in Aleppo had become more pragmatic.

"Definitely, it was a much more pragmatic debate than those that we have seen during the recent weeks. The purpose of the discussion was to capture the momentum of Lausanne and move forward, both to retrieve the ceasefire regime, increase the humanitarian aid to Syria and move the political process forward," RIA Novosti quoted Churkin as saying.

The draft resolution on Syria that Russia submitted to the UN Security Council came as a surprise to Western countries. The Russian draft resolution expresses support for the proposal from special envoy of the UN Secretary General to Syria, Staffan de Mistura.

Staffan de Mistura suggested consultations to take Jabhat en-Nusra militants out of eastern Aleppo, to Idlib. The move would put an end to the armed confrontation in this part of the city, while its residents will have access to humanitarian aid.

Prior to that, Russia had blocked the document prepared by France and Spain. The Franco-Spanish resolution envisaged a prohibition for military flights over Aleppo.

On Saturday, the UN Security Council failed to adopt a resolution on the crisis in Aleppo. In response to the Russian veto for the Franco-Spanish draft document, the opponents of Moscow and Damascus refused to support the Russian text in support of the initiative for the withdrawal of militants from eastern neighborhoods of Aleppo, having disregarded the suggestion from UN Secretary-General's special envoy Staffan de Mistura.