Putin describes the smell in Russia's relations with the West

Vladimir Putin believes that the complicated dialogue with Washington can be explained with the fact that it resembles an attempt of the US to impose its own terms on Russia. 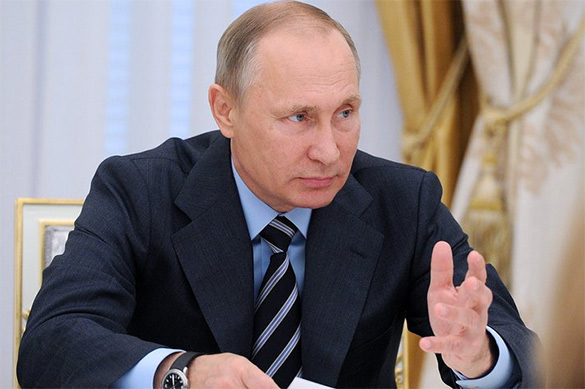 "You know, it's very difficult to have a dialogue with the incumbent US administration. There's almost no dialogue at all. What does it look like? The US administration sets forth its requirements and then insists we should meet them. This is no dialogue, this is some kind of dictate. And that is what's going on with almost each issue," Putin said.

Vladimir Putin added that Russia was ready to cooperate with the United States, but only if Moscow and Washington could respect each other's interests. "We are ready for this," Putin stated.

Blackmail and pressure against Russia will not work

The Russian President admitted that the Kremlin was concerned about the aggravation of the US-Russian relations and noted that it was not the choice of Moscow.

'We have never wanted that to happen. On the contrary, we wanted to have friendly relations with such a great country as the United States, the leading economy of the world," Vladimir Putin concluded.

Putin added that Russia would be ready to work with any president the American people would choose, if the new US president would want the same.

Putin also claimed that Moscow knew who was guilty of the attack on the UN humanitarian convoy near Aleppo, Syria.

'We see what is going on. These are completely unfounded accusations. They accuse Russia of all mortal sins and crimes. But we know who carried out the strike on the humanitarian convoy - it was a terrorist organisation. And we know that the Americans are know it too. But they prefer to have another stance on it, and engage into unfounded accusations against Russia," Putin said.

Vladimir Putin is convinced that the West will never be able to blackmail Russia as far as the regulation of the Syrian crisis is concerned. "This method of running international affairs is called pressure and blackmail," Putin said.

On 20 September, a convoy with humanitarian cargo was bombed in the region of Urum al-Kubrah. As a result, about 20 civilians and members of the UN mission were killed.

The United States should deal with Russia as a partner, and then Russia will be ready to conduct a  dialogue with Washington, President Vladimir Putin said at "Russia Calling!" forum.

Putin also recalled the situation in Ukraine. "After all, it's not us that took Ukraine to the state of the coup. Was it Russia that did it? Our American partners do not even hide the fact that it was them, who largely masterminded it, funded the radical opposition and staged the unconstitutional change of power in Ukraine. However, it was possible to do it in a completely different way," Putin said, adding that ex-President of Ukraine Viktor Yanukovych was ready for early elections.

Speaking about the influence of Western sanctions, Putin said that the Russian economy was suffering damage because of the sanctions that Western countries imposed against Russia. The main threat of the sanctions is the restriction to access and transfer technologies.

The statements about sanctions showing no influence on the Russian economy were not true to fact, Putin said during "Russia Calling!" investment forum.  According to him, the restrictive measures produce a negative effect on the economy of Russia.

"We often repeat it, like a mantra, that the so-called notorious sanctions do not show much influence on us, but they do. Above all, I see the threat in the restrictions for the transfer of technologies," Putin said.

The Russian president added that the sanctions cause damage not only to the Russian economy, but also to the international economy as a whole. "The Russian economy, of course, it is an important part of the global economy, so those who do it, they do it to their own detriment in the end," Putin said. He also promised that Russia would be able to cope with the problem.

During his speech, Putin stressed out that Russia had achieved a sustainable macroeconomic stabilization in recent years. He referred to low inflation and the fact that the budget could be run with a relatively small deficit of three percent.

In his speech at the investment forum, Vladimir Putin presented his version of the situation connected with the Russian veto on France's resolution on Syria. The day after the cancellation of his visit to Paris, the Russian president accused France of violating the previously achieved  agreements and asked French officials not to get "offended."

According to him, Russia vetoed France's resolution on Syria at the UN Security Council because the document did not take account of Russia's interests, contrary to earlier promises.

Putin stressed out that the Russian authorities valued relations with France and saw France a priority partner in Europe.

Speaking about the situation with the veto, Putin stated that the Russian authorities "do not like to dig into diplomatic dirty laundry." "It is nice only outwardly, but the smell is not very decent at times," Putin said.

According to the Russian president, French Foreign Minister Jean-Marc Ayrault came to Moscow and presented the resolution. In response, Russian Foreign Minister Sergey Lavrov promised that Moscow would not vote against it, if the document took account of Russia's position. The French minister promised to do so and said that Paris did not want to come across any veto, Putin said, explaining the reasons behind Russia's veto.

However, the French resolution blamed only the Syrian authorities and did not say anything about the opposition. "Here's what happened next: the French Foreign Minister flew from Moscow to Washington, the next day they came out with US Secretary of State John Kerry and accused Russia of all mortal sins and buried the resolution," said Putin, adding that no one discussed anything with Russia.

Putin also suggested that France may have wanted Russia to veto the French resolution to aggravate the situation.