Turkey launched Euphrates Shield military operation in Syria on August 24. The official purpose of the operation is to destroy Islamic State militants in the border zone. However, the UN has not authorized the operation, and the Syrian authorities said that Turkey violated Syria's sovereignty. 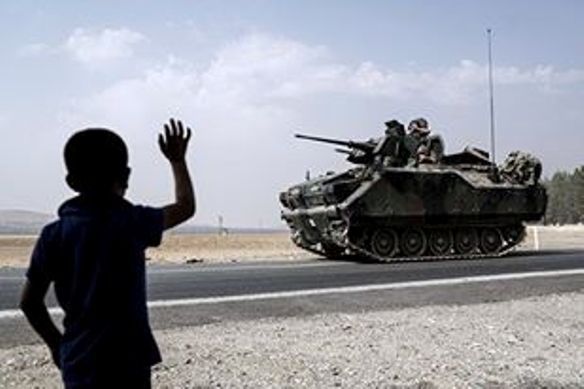 The press secretary of the UN Secretary General called the actions of the Turkish armed forces in Syria an invasion and said that Ankara did not coordinate its actions with the United Nations.

It just so happens that Turkey has ignored international law and acts similarly to the USA that does not need any permission from any international organization to invade sovereign states.

How important can the declarations from the UN be? Will they entail any real action? Pravda.Ru spoke about it to senior officer at the Center for Military-Political Studies at the Moscow State University for Foreign Relations (MGIMO), Doctor of Political Science, Mikhail Alexandrov.

"Nothing will follow. It's just a formal statement. In general, Syria's sovereignty is violated by anyone who will take the trouble, except for Russia and Iran that operate in Syria in coordination with the Syrian government. The UN has shown the reaction because Turkey's actions do not fit into the Western strategy," the expert told Pravda.Ru.

"The US, in turn, has reluctantly swallowed the pill, because the Americans are forced to reconcile with Turkey now after the conflict associated with the attempted coup. The Turks, of course, took advantage of the situation - they took advantage of the US support for their own purposes," said the expert.

When asked what would happen if Russia suddenly decided to strike Ukrainian troops in the Donbas, Mikhail Alexandrov said:

"In this case, the UN Security Council would gatherer for a meeting immediately to condemn Russia. Yet, Russia can not invade other countries, but they can."

"The leaders had a detailed exchange of views on the state of affairs in Syria. They noted the importance of joint efforts in the fight against terrorism," a message from the Kremlin said. In addition, the presidents discussed "issues of further development of Russian-Turkish cooperation in political, trade and economic spheres in light of the agreements reached at the meeting in St. Petersburg on August 9."

Meanwhile, Anatoly Antonov, Deputy Minister of Defense of Russia offered Japan to join the humanitarian operation in Syria's Aleppo, the press-service of the department said.

The officials also exchanged opinions about the situation in the Asia-Pacific region and the Korean Peninsula.

Russian Deputy Defense Minister stressed the importance of political and diplomatic settlement of the situation on the peninsula to prevent tensions in Northeast Asia. The Russian official also drew attention to negative influence of the deployment of US missile defenses on the military-political situation in the region.

Author`s name Dmitry Sudakov
*
Topics syria
13:57
Russia will not talk to Ukraine. Russia will talk to the West
13:34
USA's plan to give 20 percent of Ukraine for peace hoax
12:51
Medvedev: Ukraine as a state to be devastated, go bankrupt and be turned into colony
18:34
Biden changing strategy on Ukraine to reach diplomatic solution with Russia
13:35
USA's next step is to suppress European economies
12:28
Moscow wants to push Ukrainian troops away from Russian territories
19:55
US eco activist arrested for walking calf on Red Square
19:06
Putin speaks about the shelling of Russian regions
16:17
Ukraine shells Druzhba oil pipeline, minor damaged caused
14:48
Russian karate athlete, European champion, killed in Ukraine
Ukrainian forces suffer heavy losses while trying to cut across Dnieper