China and India to oust Russia from Syria?

Bashar al-Assad's Syria is not isolated anymore. Russia, China and India have supported the Syrian president in many ways, and it is clear that Syria is close to the end of the war, while the powers that be get ready to snatch up pieces of the Syrian pie. There is no friendship in geopolitics, and Russia comes across serious competition in Syria. 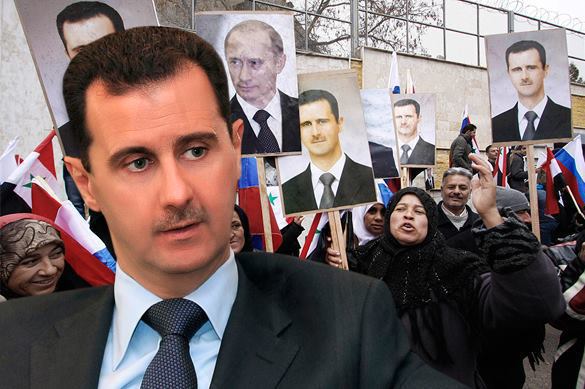 Saturday's visit of Indian Foreign Minister Mobasher Jawed Akbar  to Damascus put emphasis on India's support for the Assad government in the Syrian conflict. Interestingly, Chinese officials stated last week that China was going to double military cooperation with Bashar Assad. India preferred not to sit on its hands and sent its top official to Syria.

Unlike China, the West sees India as a democracy. Therefore, the visit of the Indian foreign minister to Syria came as an effort of the "international community" to take the war-torn country out of isolation.

Syrian president urged India to "play the role of growing power" to stabilize West Asia. An agreement was signed to further improve security talks, dnaindia.com said. The publication noted that New Delhi was concerned about the growing threat of terrorism coming from ISIL terrorist group. The website reminded that the terrorist act in Dhaka killed 29 people last month.

During the meeting, Assad welcomed India's objective approach to the conflict in Syria, and the leaders agreed that terrorism was a global problem, said dnaindia.com with reference to diplomatic sources. Akbar said that the time to restore the destroyed Syrian cities would soon come, and Assad invited India to participate in their reconstruction.

India's interest in the stability in West Asia stems from the fact that more than seven million Indian nationals work in the region. Their safety remains a major concern for the government, in addition to the country's energy needs, the website said.

It is interesting, however, that a year ago, New Delhi did not think about either Indian migrants or many joint projects in the region. Some of them were large-scale projects, such as, for example, the Tishreen hydroelectric station under the control of Bharat Heavy Electricals Ltd (BHEL), or the Steel Plant in Hama province. Now New Delhi intends to finish those projects, if Damascus guarantees safety.

The above-mentioned prospects suggest that the war in Syria is nearing its end. Moreover, it is clear who is going to promote their businesses in the post-war Syria. The changes were made possible after Turkey admitted Bashar al-Assad's presence in the transition government. The Americans no longer want to topple Assad either. Arab monarchies, however, still remain opposed to Assad's role in the post-war Syria.

Last week, China expressed its support for the Syrian president. China's policy will be aimed at strengthening cooperation with Syria in the fight against the threat of terrorism, the chief of the Office of International Military Cooperation of the Central Military Commission (CMC) of China Guan Youfei said. He said that China was going to strengthen anti-terrorist policy against the militants in Syria to thereby support the Assad government.

Syria is a grateful friend. Assad supports Beijing on the South China Sea dispute. Damascus supports India on the issue of Kashmir by claiming that Kashmir remains an integral part of India. As for Russia, Assad supports Russia's reunification with the Crimea.

Moscow has to do all the "dirty work"

As we can see, the ongoing conflict in Syria is no longer seen as the conflict with Bashar Assad, the "outcast." The Syrian conflict has now evolved into the geopolitical struggle against radical Islamists.

The West, Turkey and Arab monarchies are not likely to be among those who will be sharing pieces of the Syrian pie. The pieces will be distributed between Russia, China and India. Beijing and New Delhi have something that Moscow does not have  - billions of dollars in investment. Moscow is waging war in Syria, but Beijing and New Delhi are not. Russia bears political responsibility, and they do not. Thus, the Russians will do all "the dirty and hard work", whereas the Chinese and the Indians will enjoy the results.

Moreover, they will be able to attract Iran and Turkey to the reconstruction of Syria, regardless of who comes to power in Damascus after Bashar al-Assad. This is quite possible indeed, given China's past experiences in Africa and Latin America.

Russia should not put all eggs in one basket in Syria. Russia should negotiate and promote mutually beneficial economic projects, otherwise Russia will be shown the door because "the Moor has done his duty."

"The recent trilateral meeting of the presidents of Russia, Iran and Azerbaijan has given a new impetus to the implementation of the North-South transport corridor," Boris Volkhonsky, deputy head of the center for Asia and the Middle East at RISI told Pravda.Ru. "Syria is not far from this corridor, which should become a center for the integration of the vast region, including the Middle East, the Caucasus, Central Asia, Russia and Northern Europe, with India joining the project.