Russia's FM Lavrov finds many corners in the Oval Office

Russian Foreign Minister Sergei Lavrov held talks in Washington with US President Donald Trump and Secretary of State Rex Tillerson on Wednesday, May 10. 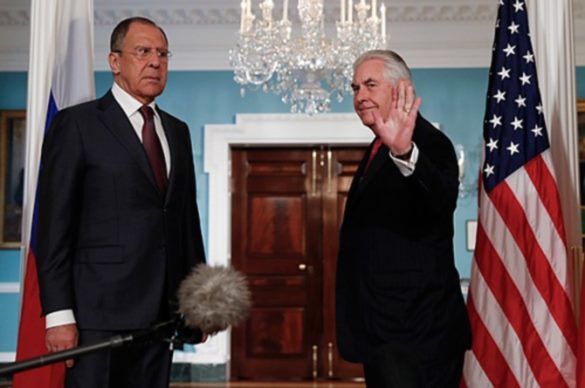 First, Lavrov had a meeting with the head of the US State Department, with whom he talked for 1.5 hours. Afterwards, Sergei Lavrov went to the White House, where his meeting with US President Donald Trump continued for about 40 minutes. The talks were held behind closed doors, with no journalists present.

Trump told reporters afterwards that they had a "very, very good meeting" with Russia's top diplomat. Donald Trump stressed that the terrible violence in Syria must be stopped.

At a news conference following the talks, Sergei Lavrov said that he, Donald Trump and Rex Tillerson were looking for ways for Russia and the United States to cooperate on the international arena. "It was confirmed that, despite all the difficulties, our countries can and should help together in solving key problems on the international agenda," the Russian Foreign Minister said.

The parties discussed the implementation of the initiative to create de-escalation zones in Syria. "First of all, we focused on the ideas that were discussed during Rex Tillerson's visit to Moscow when he spoke about the creation of de-escalation zones," Lavrov said after the talks with the American leader. According to Lavrov, this initiative is now being implemented into the agreements that were proposed at the talks in Astana. "We are ready to cooperate here, and today we discussed specific ways that we will be able to jointly manage," the Russian Foreign Minister said.

"We do not have any exit strategy, we all should do what we have agreed upon. This is stated in the Security Council resolution, and we must do it," Lavrov said, answering a question about Russia's "strategy to exit Syria."

According to the minister, "one should put an end to all terrorist manifestations in Syria, not to let the country turn into a hotbed of extremism and instability as it happened to Iraq and Libya."

"In Iraq and in Libya, the progressive international community was obsessed with the need to overthrow one person, and we all know what it has led to," Lavrov stressed. Therefore, he noted, "when it comes to resolving the Syrian crisis, let's learn from mistakes of the past."

"President Trump today has once again confirmed that the main goal that the US wants to accomplish in Syria is to defeat terror, and we share this idea fully," Lavrov said.

Given the hype surrounding the dismissal of FBI Director James Comey, the Russian Foreign Minister was asked a question about it as well. "These are your internal affairs," Lavrov briefly replied to an American journalist.

"President Trump has repeatedly said what he thinks about the allegations of Russia interfering in your internal affairs. One does not need to whisper about it to us. We know what President Trump thinks on the matter, and we know what others think. The trouble is that no one has ever provided a single proof to anyone, that's all," Lavrov said.

"This is not a question to me at all. I can give you many examples when they make appointments in Russia, in France, in the UK, or when someone gets fired. These are your internal affairs," Lavrov said commenting on Comey's resignation.

Noteworthy, Donald Trump said after the talks with Lavrov that Comey's dismissal did not produce any effect on the negotiations with the head of the Russian Foreign Ministry.

In addition to Syria, the parties discussed the Palestinian-Israeli conflict, the state of affairs in Afghanistan and the crisis in Ukraine. "We did not discuss the issue of sanctions, it's not our problem. This is a unilateral action that was taken against us," Sergei Lavrov said.

As for the meeting between Donald Trump and Vladimir Putin, Sergei Lavrov said that they will meet at the G20 summit in Hamburg, which will be held on July 7-8.

"The presidents, when they spoke on the phone recently, confirmed that they would meet within the scope of the G20 summit in Germany in the first ten days of July, and today we spoke with Rex Tillerson about the ways of how we could move forward on issues of Syria and other issues to have certain results before the presidents meet," Lavrov said.