Nuclear war may break out in any part of the world

The threat of a nuclear war remains real. The war may break out primarily because of the crisis on the Korean Peninsula, as well as because of USA's and NATO's provocative actions in Eastern Europe at the time when main disarmament treaties are falling apart. One should also keep in mind the USA's desire for global military and technological superiority, which, according to Washington, gives America the right to be the first to strike a preemptive blow. What can Russia oppose to this? Pravda.Ru asked Igor Korotchenko, editor-in-chief of the National Defense magazine, to share his views on the subject of today's strategic security. 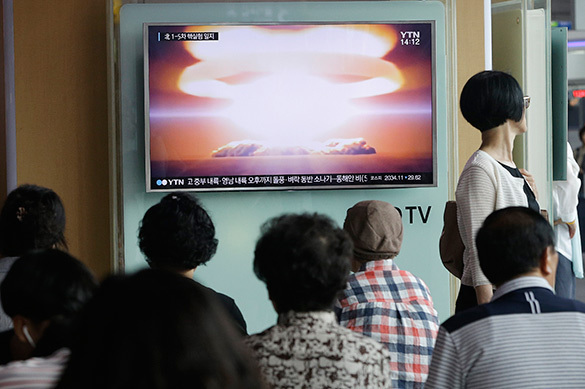 "In today's world, the threat of nuclear war has been a much talked about issue lately. The crisis on the Korean Peninsula remains intense, the UK has recently announced readiness to strike a preemptive blow. Is the threat of a nuclear war in the modern world too high?"

"If we look at the United States of America, their policies and doctrinal attitude clearly demonstrate Washington's commitment to the use of nuclear weapons, including preventive strikes. Moreover, the USA claims to have the right to do it first.

"The whole situation around North Korea has subsided slightly, but we can not be sure that the US administration has completely abandoned its plans against the DPRK. Therefore, concerns remains very high, because North Korea will definitely use nuclear weapons to defend itself. North Korea may either launch nuclear-capable ballistic missiles at Japan or South Korea, or send a submarine equipped with nuclear ballistic missiles to the shores of the United States of America. They may also explode an A-bomb near the site of the deployment of US troops in South Korea. We do not know what North Korea will do, but we do know that if someone strikes North Korea, Pyongyang will respond immediately.

"Let's look at American tactical nuclear weapons in Europe. Three airbases have been set up on the territory of Lithuania, Latvia, and Estonia, where, under the guise of so-called air patrols, modern tactical nuclear-capable fighters of NATO Air Force are deployed. It goes about the notorious B-61 bomb, which the Americans modernise all the time.

"It is also worth remembering the recent claim from Great Britain about the right to be the first to use nuclear weapons. Last year, NATO conducted a series of exercises in the Baltic region. Their goal and task was about the occupation of the Kaliningrad region, the blocking and destruction of the forces of Russia's Baltic Fleet and striking tactical nuclear blows on a number of Russian facilities in the north-west of the country.

The Americans and NATO are planning all these operations before both sides could use strategic nuclear forces, which, of course, will mean the destruction of the civilisation. Yet,  the very possibility of the use of tactical nuclear weapons is actively used in terms of real military plans. Note that Russian strategic military nuclear forces provide not only strategic parity here, but also insure us against similar plans of the part of the United States.

"Pentagon's declassified documents clearly say that the nuclear war plan had been prepared back in the early 1950s and provided for a massive atomic strike on all largest million-strong cities of the Soviet Union."

"Nuclear weapons of the United States remain under control. One can hardly expect any hysterical, ill-conceived and unpredictable actions that could lead to a global nuclear war. Yet, when countries of different scale gain access to nuclear weapons, this is a whole different matter. This is what remains most dangerous. The situation of strategic opposition that persisted during the Cold War was dangerous, but at the same time it was quite stable. Today, the situation is different, because a nuclear war may break out in different parts of the world, and there are forces other than Russia and the USA that may trigger a nuclear crisis. Do you think Russia should build her own policy of nuclear security?"

"With all my dislike for NATO, I can not say that France and Britain are irresponsible states in terms of control over nuclear weapons. They are historical members of the nuclear club, and their control system remains on a high level."

"What about other non-traditional states?"

"According to various estimates, Israel has up to 200 nuclear warheads. There is also, of course, India and Pakistan. The risk for a nuclear war to break out between India and Pakistan is also very high. There is also China, a nuclear power, that has been successfully improving and modernising its nuclear weapons. Yet, North Korea is currently the biggest problem. One can understand Pyongyang's sentiments, especially against the backdrop of the attempts of the United States to overthrow another regime, as they did in Libya. Libya did not have nuclear weapons, and Gaddafi was killed.

"Other countries stick to international agreements, because any industrialized country is capable of creating nuclear weapons today. Poland has recently announced a call for the EU to possess nuclear weapons, but this is a political statement, because from a practical point of view, NATO has nuclear weapons. It goes about American tactical nuclear bombs that will be transferred to NATO member countries in case of a real nuclear conflict. Afterwards, they will strike nuclear blows on Russia with the help of the aircraft that are currently deployed in Lithuania, Latvia, Estonia, Poland, etc.

"When Donald Trump spoke about the need for another wave of nuclear disarmament, I said that there were three reasons, for which Russia could do it. First and foremost, the USA would need to completely withdraw its tactical weapons from Europe, to the territory of the United States. Secondly, they should sign legally binding documents that will restrict the deployment of the American missile defense system, not only in Europe, but throughout the world - both ground and sea-based elements of the missile defence system. Thirdly, we all  should join the negotiation process together with the United States, Great Britain and France. Russia sits down with the United States, Britain, France, and their potential is juxtaposed against ours before we can talk about the reduction of nuclear weapons.