Russia to reconcile India and Pakistan

Against the backdrop of clashes in Kashmir that threaten to escalate into a war between India and Pakistan, Russia conducted military exercises "Friendship-2016" with Pakistan. India saw the move as an act of betrayal. Why does Moscow eye Islamabad rather than New Delhi? Pravda.Ru spoke about it in an interview with Boris Volkhonsky, the Head of the Department for Asia at RISI. 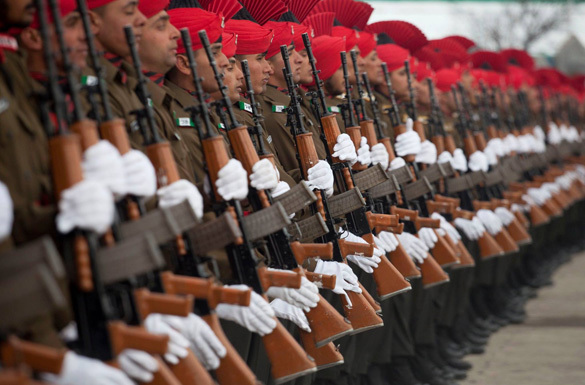 "The Pakistani authorities said that a nuclear conflict with India could be possible. There were four wars in the history of the two countries, so one can not exclude a worst case scenario. What caused the current aggravation of relations between India and Pakistan?"

"The conflict over the territory of Kashmir is 70 years but it is still far from being resolved, as in 1947, when former parts of the British India fell apart into two independent states - India and Pakistan. The territory of the historic principality of Kashmir is now controlled by three countries and four administrations.

"Finally, a small part of Kashmir is controlled by China: there is almost no population there, but for China, this area is purely of strategic value in terms of logistics. India and Pakistan claim for the territory of the historical principality of Kashmir in its entirety.

"Today's Kashmir is divided between the two countries by so-called Line of Actual Control. It is almost invisible in the mountainous terrain, where it passes through narrow winding roads. Shootouts occur there periodically, and the situation on the line aggravates once in two or three years.

"Militants penetrate into India from Pakistan indeed. They attack Indian military men, police officers and civilians. This is a periodic and seasonal phenomenon. In a month or two, the mountains will be covered with snow, and there will be no combat action taking place there for a while.

"As for the threat of a nuclear conflict, no one knows how many nuclear warheads India and Pakistan have. According to experts' estimates, it goes about approximately 100 pieces for each side. Pakistan, perhaps, has ten percent more.

"If even a half of those nuclear weapons is used, they will kill tens of millions of people, not to mention long-term effects, such as outbreaks of cancer diseases, genetic disorders in babies and so on. A huge and destructive blow would be struck on the economy of Pakistan. India will have to face lamentable consequences too. Therefore, a nuclear feud is not likely to occur."

"Did Pakistan and India build their own nuclear bombs or did the technology leak from the USA?"

"India has its own nuclear weapons. India appeared as a nuclear power in 1998, when it tested its nuclear weapons. Pakistan conducted a nuclear test soon afterwards. A lot remains unclear at this point. China might have contributed to it, a lot was said about cooperation in the nuclear sphere between Pakistan and North Korea. Yet, there is no evidence to prove anything.

"The United States imposed sanctions both against India and Pakistan immediately after the tests. However, one may assume that the USA did it as a cover up because the USA resumed cooperation with India in the field of peaceful nuclear energy."

"Russia's relationship with Pakistan has been more than cold for many years. Pakistan is a pro-American state that had contributed to the creation of the Taliban movement in Afghanistan. All of a sudden, 200 Russian mountain shooters arrived in Pakistan on September 23 who conducted the  symbolically named "Friendship-2016" drills with the Pakistani army. Why such a change?"

"Forty years ago, during the USSR's military presence in Afghanistan, Pakistan was indeed a tool in the hands of the USA. However, a lot has changed since then. The Soviet Union collapsed. India used to be a very close friend and ally of Russia. During the 1990s, Russia had forgotten its friends in the world. A lot of reforms had happened in India too. The cooperation between Russia and India slowed down. Separatism is a disease for many countries. Almost every country has its own problems of territorial integrity. With Russia, India has taken quite a balanced position: India  recognizes Russia's legitimate interests in the Crimea, but remains an advocate of territorial integrity."

"India and Pakistan should find a solution to the problem themselves, they do not need to take the problem to international forums. In my opinion, there are two ways to go in this direction: either recognize the existing line of control as a state border to keep residents where they are, or postpone the solution of the question till better times and promote cooperation in other fields. This could be like the story of Spitsbergen, or Svalbard: Norway has the sovereignty, but other countries conduct economic activities on the archipelago too, in accordance with certain agreements."