The US attacked a Syrian airbase yesterday. The decision was taken by Donald Trump. 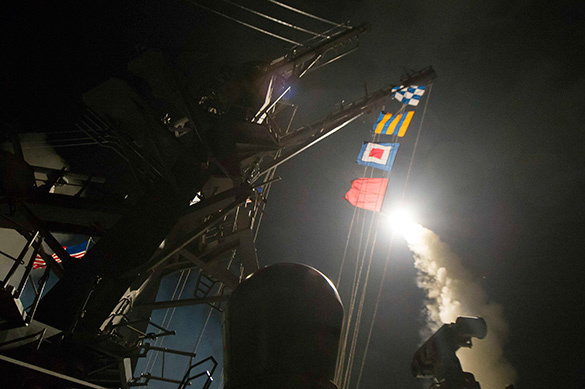 James Jatras, former US diplomat and GOP Senate foreign policy adviser, has told Pravda.Ru why Trump has gone the length of it.

There are a couple of different explanations. Let me give you the best possible one. He has done this because he is in a very weak position domestically, he is under siege, by the Department State and by the media, and he felt he could not deal with Russians and the Syrians and the Iranians toward a solution in Syria without laying down a marker, without showing that he is a big gun and he is in charge. And it could possibly be the solution because of how limited the strike was, and that he did not get crosswise with the Russians. Having said that I do not really believe that is what is happening.

I think unfortunately he has been boxed in by people in his Administration who do not agree with anything he said during the campaign. I believe he is being driven by political forces which are beyond his control and that he has essentially gone over to the Department State side. He thinks that somehow he can weather the storm if he goes along with the agenda. And I think he will find now that he is in a much weaker position even than he was before.

So, is this some kind of a game?

It's certainly a very deadly game, a political game. It's a game with the future of the country and the world at stake. I find most disturbing actually even more than strikes, his comments about Bashar al-Assad and what seems to be a return to the agenda of regime change.

We know that Mr Tillerson will be in Moscow on Tuesday, I hope he does not come there like John Kerry, saying 'OK, now, that we have shown how tough we are, you must agree with us, we will come with this solution that involves regime change in Syria'. We have to understand and they must understand that there are only two choices in Syria - Assad or the Jihadists, Assad or the terrorists. And unfortunately it seems that Trump is now being boxed in by some people who speak for the Saudis, the Gulf states, the Israelis, the Turks, all the people that have been behind the regime change operation in Syria for 6 years. And he thinks that he is going to talk Moscow around to it. He is going to be very badly disappointed. And this is going to get worse.

Only 23 missile reached targets. Does this point to effectiveness of the US military? Or was it done on purpose?

About 60 missiles were fired. Obviously that is the case that does not say anything good about the situation. The only good thing I can say about all of this is that we did not use aircraft that would have put the Russians and Syrians in a position of having to shoot them down and perhaps succeeding so. In which case we might find ourselves involved in direct combat between Russia and the US. And it looks like he was careful to try to avoid that. But if he keeps down this road, I do not see that it would be avoidable.

Is a ground operation possible?

Remember, we have people on the ground already. And this is a bizarre thing, it is in the same breath as he was saying that Bashar al-Assad is terrible, Bashar al-Assad can be part of the future. Then he says that the world has to unite together to fight against terrorism. Well, Assad is fighting against the terrorism, he is fighting against Daesh, against al-Qaeda and their allies. These are our allies who are supporting the terrorists. We have in effect become ISIS' and al-Qaeda's Air Force. Once again we find ourselves being the Air Force for the Jihadists who are killing the Christians. And then we wonder why things are so bad in these countries. It is a complete incoherence.