Russian-Iranian relations have never been smooth and unambiguous. Doing business with one of the oldest civilizations that used to play a global role in world politics back in the days of Ancient Greece, is a hard nut to crack. One should always bear in mind the fact that Iran pursues its own interests that may not always coincide with those of Russia. Teheran will plan its actions on the basis of its own interests under all circumstances. 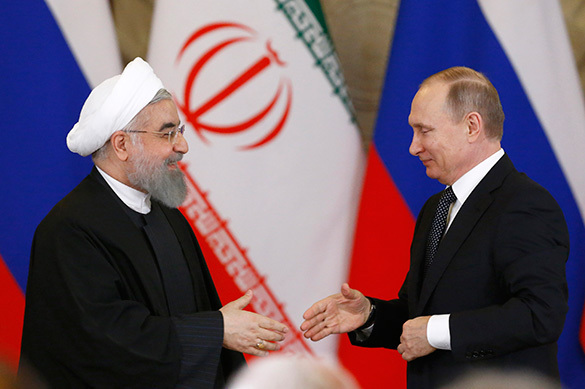 Peculiarities of communication with the Iranians were manifested at the very beginning of Russia-Iran talks, during the exchange of welcoming speeches between Presidents Putin and Rouhani. For example, Putin pointed out the long history of relations between the two countries: "Russia and Iran have many years, if not centuries of cooperation. We have been maintaining diplomatic relations for more than 500 years. Iran is our good neighbor and reliable partner," Russian President Putin said.

Rouhani's approach to the cooperation between Russia and Iran was much more constraint. "Over the past 3.5 years, the relations between the two countries have developed positively step by step. This is not our first meeting, and when I look back at what achievements we have had after our every meetings, I see that we have had significant successes."

Three and a half years - the time period to which the Iranian president referred - is the period of his presidency. In May of this year, Iran will hold the presidential election, and Hassan Rouhani may leave the political arena. In this context, the refusal of the high-ranking guest to use the word "centuries" and his focus on an absolutely certain and short period of times speaks volumes. From his point of view, the current quality of Russian-Iranian relations is connected with the personality of Rouhani himself. Therefore, the relations between the two countries may change after the presidential election in Iran. A subtle innuendo indeed!

As for the negotiations themselves, then, judging by the final information, the talks were dedicated to the subjects that Pravda.Ru has written about before: oil and gas industry, nuclear power, transport and logistics corridors and mutual trade. The sides achieved certain agreements and outlined sufficiently clear prospects for further development of the cooperation.

As for the international and political bloc of the talks, the leaders talked about the struggle against terrorism, about Syria, Afghanistan, the Caspian region and Transcaucasia. The number of specific details about this part of the talks is smaller and discrepancies in formulations are greater.

Let us take the fight against terrorism. Here's what Vladimir Putin said: "We consider it important to further strengthen cooperation in the fight against international terrorism. Russia and Iran coordinate their steps in the elimination of ISIL and An-Nusra and contribute to the regulation of the situation in Syria." Here are Hassan Rouhani's words on the subject: "We discussed the concerns with regard to Syria and Yemen, other regional countries, as well as the cooperation that we conduct to combat terrorism. We will continue this struggle until the end of terrorist activities throughout the region."

What is the difference? The Russian president puts fairly clear boundaries and goals: Syria, ISIL, An-Nusra (Islamic State, Daesh, An-Nusra, Jabhat an-Nusra - terrorist organizations banned in Russia). The Iranian leader talks about Yemen, "other regional countries," and, most importantly, he invites Russia to continue the struggle "until the end of terrorist activities throughout the region." The reference to "other countries" may well mean Israel and Saudi Arabia, which Tehran accuses of resorting to "terrorist practices." This could mean that Iran would like to draw Russia into the implementation of its own regional strategy, while Moscow shares other, much more distinct goals and objectives.

The Iranians indeed try to win Russia over to their side. On the eve of Rouhani's visit to Moscow, Iranian Foreign Minister Zarif said that Russia could use Iranian military bases to fight terrorists in Syria. The message was clearly made to remove the bitter aftertaste of the Hamadan air base story. One has to admit that Zarif's offer looks very tempting against the backdrop of USA's current actions in Syria and the race, in which various players try to leave other competitors behind and be the first to take terrorists' capital - Raqqa - and other strategically important sites.

We would like to draw attention to another aspect: Transcaucasia. Putin did not mention the region in his statement for the press. Hasan Rouhani spoke about preparations for the second tripartite summit of Russia, Iran and Azerbaijan.

This is a very important aspect of the talks, taking into consideration such factors as Armenia and Nagorno-Karabakh. Putin's reluctance to mention the Moscow-Tehran-Baku triangle is understandable, because this is something that Armenia does not want to hear. Armenia is extremely nervous about any action that may change the regional balance of power in favor of Azerbaijan.

Rouhani mentioned the triangle in his speech for this very reason. Apparently, Iran would like to make Armenia frown at Moscow's "double game." Tehran could offer itself as a "strong friend" to help the Armenians in solving their problems in the field of both security and economy and replace Russia at this point.

Yet, the above does not mean that Russian-Iranian relations do not have prospects for development. On the contrary, the more sober and pragmatic approach Russia will have, the more chances for successful, mutually beneficial and long-term cooperation we will have. The main thing is not to let illusions blind us.