The Syrian President has delivered a public statement. He claimed that the Jewish state had waged war on his country. 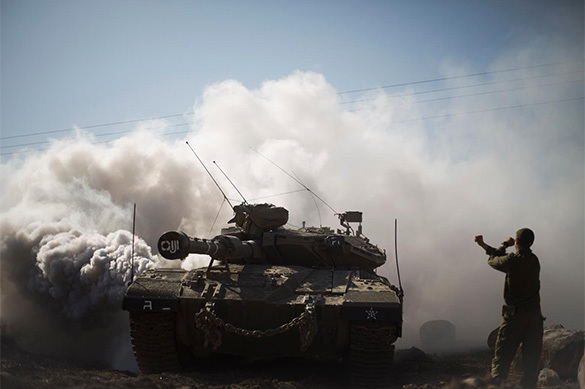 'Israel tries to help terrorists in any region of Syria, where assault of government army is carried out,' Assad said.

According to him, terrorists formally are not part of the Israeli army, but some of them fight for Israel. 'Our victory over terror will mean a victory over Israel,' he pointed out.

In such a way the Syrian president has charged Israel with providing help to terrorists who try to dethrone legitimate power in Syria.

'One should not be afraid of a threat of war between Syria and Israel, because in reality we are in war with this country anyway. I do not know whether what is taking place can be named literally as a Syria-Israel war. But Israel definitely supports terrorists who fight against the Syrian army. Israel has common aims with Turkey, the US, France, Great Britain, Saudi Arabia, Qatar and other states. In case Syria wins this war, it will mean that it defeats all those countries,' Assad claimed.

As Pravda.Ru reported before, Moscow will continue taking part in the anti-terror operation in Syria which is carried out by forces of the Syrian Arab Republic. While the US President blamed Bashar al-Assad and Barack Obama for a chemical attack in the Syrian province of Idlib.

The Russian Defence Ministry reported that the Syrian aviation carried out a strike in the suburbs of the Khan Shaykhun town against ammunition store of the terrorists. There was an arsenal of chemical weapons, which were delivered to Iraq.

On 4 April the National Coalition for Syrian Revolution and Opposition Forces claimed about 80 victims of an attack with appliance of chemical weapons in Khan Shaykhun of the Idlib province and 200 wounded. The Syrian government troops were blamed.

A source in the Syrian Armed Forces claimed though that the Syrian army does not possess chemical weapons, and a statement on an attack in the province of Idlib may be part of propaganda against the Syrian army.

Attack against children impressed the US leader greatly, and 'that crosses many lines', Trump is sure. Comparing with alike attacks with appliance of gas which happened last year, the current incident is 'a whole different level', the US President higlighted.

Topics syria
18:26
Scholz names the conditions for lifting anti-Russian sanctions
17:40
Russian intelligence: Poland's working on scenarios for the dismemberment of Ukraine
16:30
Emmanuel Macron ready for dialogue with Putin when necessary
15:51
Frozen Russian assets: The greatest theft in history
19:51
Moskva cruiser of the Russian Navy was an easy victim for Ukraine
19:10
Expert names the ratio of losses of the Russian army to the Ukrainian
18:30
Kremlin calls Johnson "Freud's dream" after his words about Putin
17:50
Zelensky's office names the amount of money Ukraine needs to restore its economy
17:20
Zelensky compares NATO to policy to old turnstiles in the Kyiv subway
16:45
NATO officially names Russia the main threat to its security
World
Putin answers to Ukrainian's HIMARS with Sarmat and S-500