This year, the American democracy marks 240 years. Is it still alive, though? What happened to Thomas Jefferson's principle of non-interference into other countries' affairs? Why does the United States want to control everything on the planet? Pravda.Ru talked about it in an interview with Professor Eduard Lozansky, President of the American University in Moscow. 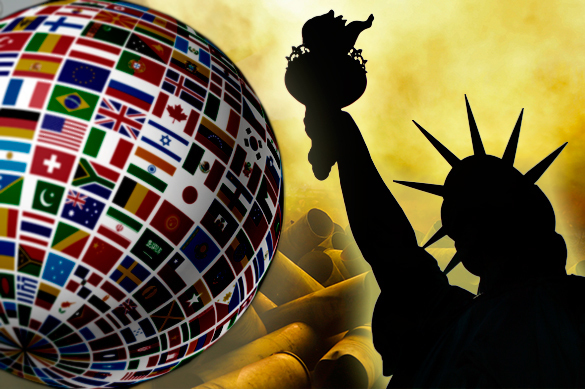 At first, let us quote ideologist of the extreme right faction of the Republican Party, Patrick Buchanan: "Even the great democrat Thomas Jefferson seemed to sanction terror. Long before the fall of the Bastille, he wrote: "What signify a few lives lost in a century or two? The tree of liberty must be refreshed from time to time with the blood of patriots and tyrants. It is its natural manure."

Buchanan quoted Jefferson in his book "Where the Right Went Wrong." Patrick Buchanan then proceeds to the "most condemned passage penned by Jefferson:" "The liberty of the whole earth was depending on the issue of the contest, and was ever such a prize won with so little innocent blood? My own affections have been deeply wounded by some of the martyrs to this cause, but rather than it should have failed, I would have seen half the earth desolated. Were there but an Adam and Eve left in every country and left free, it would be better than it is now."

As we can see, in the days of Thomas Jefferson, the destruction of the population of the whole planet was only a metaphor. Alas, it can be gruesome reality today.

The former British colony was relatively quiet in the beginning, but the appetites of the American elite were growing fast. In the second half of the 20th century, observers started speaking about the disappearance of democracy in America. What is happening to the United States? We asked this question to President of the American University in Moscow, Professor of the Moscow State University and the Moscow Engineering Physics Institute, Eduard Lozansky.

"The founding fathers of the United States of America did not want their country to interfere into internal affairs of other states. One of the most respected US presidents, Thomas Jefferson, wrote in black and white that America should not interfere into other countries' affairs.

"Originally, America was built on ideals. The principle of non-interference in the affairs of other countries was first proclaimed by Jefferson, and the US was dealing with its own matters for many years. Unfortunately, what we see now - the messianic idea of ​​control over almost the entire world - (some call it supremacy) harms the interests of the United States in the first place.

"This messianic idea costs America a lot. It is impossible to grasp the immensity, but this is exactly what the US has been doing lately. Of course, one should not blame the American people for this. It is neocons who stay in charge of the US foreign policy now. In the past, they were neo-conservatives from the Republican Party, but now this craze has affected most of the Democratic Party and, sadly, the media.

"In general, it seems to me that America has somewhat overestimated its capabilities. The USA holds a huge debt of nearly $20 trillion, which already exceeds 100 percent of GDP. Is there any way out of this? Donald Trump may change the situation if he takes office as president."

"You said in one of your interviews that ordinary Americans remember the time when America left the British Empire 240 years ago and now they start thinking about leaving NATO. Do you think that Trump could contribute to this as president?"

"Donald Trump, no doubt, is the most popular politician in today's USA, at least among the Republicans. It explicitly speaks about the feasibility of AmerExit, because NATO is unable to justify its enormous maintenance costs. I think it is naive to expect any serious changes. If Trump comes to power, then, at least, such a chance will appear. Yet, politicians say one thing, but when they come to power, they say another. One should not indulge in euphoria.

"I believe that America should revise its attitude to NATO, as NATO is not playing the role it should play. The alliance does not ensure the security of the country and is completely helpless in the struggle against international terrorism. On the contrary, NATO's actions escalate tensions that may evolve into confrontation, including nuclear confrontation, with Russia."