The events that happened yesterday in Nice come as a consequence of Western-style globalization and forced export of ideology that denounces Christian values ​​and goes down to the trivial conquest of resources under the guise of tolerance and human rights. The pendulum of Jihad only starts swinging. 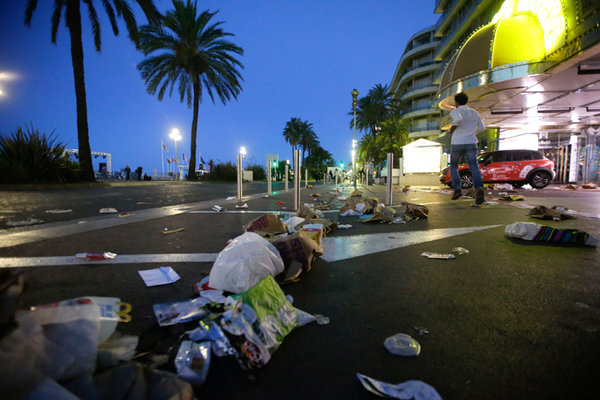 When people were celebrating Bastille Day in Nice on July 14, a truck rammed into the crowd, leaving dozens of dead bodies behind. Is it bad, citizens of the "civilized" Western world? It is monstrous. But what do you want if your leaders can kill one million Iraqis "by mistake"? This is evidenced by the recently published Chilcot report. The West can destroy a social state with a clan and communal style of life and put a stranger, whom no one respects, in power. Was it not the case in Libya? According to their double standards, Western leaders divide terrorists into good and bad ones, and notice victims of terrorist attacks only in their own countries.

What do you want in return? It is people, who always pay for mistakes of their policy-makers. Think before you vote. In Australia, for example, a number of studies confirmed that  the Muslim "mainstream" supports terrorist acts, albeit implicitly.

Why is France suffering from terrorist attacks? France is the weakest of all the Western states that lead the fight against Islamic terrorism.

If Paris is the face of France, the face of Paris is its subway. A person taking a ride in the Paris subway can instantly feel aggression of blacks against whites. France is about to start reforming its security services. There are five or six agencies that deal with this extremely important form of state activity. Even if France sets up super special services, the country will not be able to solve the problem of the clash of civilizations.

It is interesting to see how France is trying to handle the problem of wearing hijab by Muslim women. One French judge allows wearing it, another one forbids it. As a result, they had to resort to the assistance from the European Court of Human Rights. A French TV host once said that Christian people did not object to wearing the traditional Islamic headscarf by Muslims, but all Muslims rose as one against the ban. They actually live as a state within a state, the TV presenter said.

We are witnessing the death of the Western Christian civilization and the strengthening of the Muslim civilization. Muslims look stronger against the background of Protestants and Catholics. In Muslim countries, the number of divorces is a lot lower. There are also fewer illegitimate children and single mothers there and almost no abandoned elderly. Muslim women give birth to many children, and the Western society suffers from infertility. Perhaps the power of Islam is about its connection with the state in many countries. Islam has an enormous influence on Muslim politicians. However, the power of Islam gives an aggressive tone to it as well.

If the West does not abandon the policy of promotion its "exceptionalism" to the east, Muslims will crush the Western world. In the West, there are policy-makers who realize that one has to do something, but capitalism is not a religion to capitulate quickly.

Russia has an experience in the reconciling Christian and Islamic civilizations. Russia still has Chechnya. Russia values morality, and Orthodoxy has not become a "religion of the dollar." Russian people would rather negotiate than fight. There are such healthy forces in Islam as well.

The entire history of mankind is one giant attempt to displace or directly destroy the  people with a "wrong" outlook. The most glaring example is fascism. Protestant America was doing the same for a very long time as well. Islam may die too unless Muslims get rid of the sense of superiority in relation to other religions. People will kill each other unless we learn to compromise.