Turkey and Saudi Arabia plan war against Russia and Syria

Turkey continues building up its military presence on the border with the Syrian Arab Republic, as evidenced by photographs from reconnaissance drones. 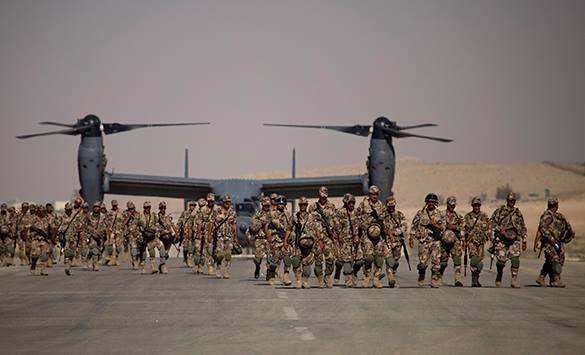 A source at the Syrian Armed Forces said that more than 20 Turkish tanks, more than 20 self-propelled guns and 30 field artillery guns of various calibers appeared near the border on Syria during February 7-10.

Turkey secretly deploys military hardware on the territory of Turkish military facilities. Turkey has also been taking efforts to increase the presence of its troops on the border with Syria. Up to 5,000 Turkish military personnel have been deployed in the region in the first two weeks of February. To quarter them along the border, Turkey creates army camps masked as refugee townships.

For example, in the area of Bab-es-Salam, up to 2,000 military men were quartered in a tent township immediately behind the border line. A field hospital was also erected in the location.  According to experts, Turkey will be ready for an attack on Syria by the end of February.

Noteworthy, Advisor to the Defence Minister of Saudi Arabia, Ahmad Asiri, stated that Saudi Arabia would launch a ground operation in Syria as soon as the US-led international coalition makes such a decision.

Earlier, the head of the Saudi Ministry for Foreign Affairs, Adel Al-Jubeir, announced a possibility to send Saudi special forces to Syria as part of the US-led coalition to fight the Islamic State terrorist group.

According to Politonline, even though November 24 became the day, when the relations between Russia and Turkey were ruined, they could hardly be referred to as friendly relations during five years of the Syrian conflict.

Russia became a potential enemy when the country joined the Syrian conflict on the side of Damascus and President Assad. Having blocked the possibility to deliver any cargo through its airspace and waters in the beginning of the civil war in Syria, Turkey, in fact, forced Russia to start an operation called the "Syrian Express" in 2012.

It was Russia that supported Damascus in most critical moments of the civil war. The Syrian government has thus been able to retain control of important cities and push militants out from the territories near the Syrian capital.

What was Turkey's role in the conflict? Turkish citizens have been taking part in the Syrian conflict since the very beginning of the Syrian civil war. Turkey itself has been showing significant influence on the conflict in the Arab Republic. Therefore, one may conclude that Turkey has committed acts of foreign intervention into internal affairs of Syria. In Turkey, Islamist terrorists could receive medical aid and Internet access (via private Turkish providers) to upload their propagandist videos on extremist sites.

One may also recollect Turkey's participation in the attack on the town of Kessab (province of Latakia) in the spring of 2014. Several thousands of Jabhat en-Nusra militants and terrorists from other groups had been sent to the region via the Turkish territory with the support of Turkish secret services and the military.

Turkey also tries to weaken the forces of the Kurdish militia.

Of course, after November 24, 2015, the relations between Russia and Turkey started worsening very quickly. Ankara has never apologized for shooting down the Russian fighter jet, and no one was punished for the criminal act, in which two Russian military men were killed. Such a serious crisis has not occurred in the Russian-Turkish relations since, perhaps, 1920.

The rhetoric of the Turkish authorities has changed dramatically too. A few days ago, Turkish Prime Minister Ahmet Davutoglu, speaking at a meeting of the parliamentary faction of the ruling Justice and Development Party, said all of a sudden that Ankara wanted to defend the Syrian city of Aleppo.

"We will return our historic debt. At one time, our brothers from Aleppo defended our cities of Sanliurfa, Gaziantep, Kahramanmaras, now we will defend the heroic Aleppo. All of Turkey stands behind its defenders," Davutoglu said.

Davutoglu made the statement after the Syrian military cut off terrorists' major supplies channels in northern Aleppo province from from Turkey.

Russian officials also expressed concerns about Turkey's possible attack on Syria. "We have serious reasons to believe that Turkey has been taking efforts to prepare a military invasion of the territory of a sovereign state - the Syrian Arab Republic. We have seen many signs of the hidden preparations of the Turkish armed forces for military actions in Syria," an official spokesman for the Russian Defense Ministry, Major-General Igor Konashenkov said.

Russian Foreign Minister also spoke about the possibility of a large-scale war in the region with the participation of neighboring countries.

"If the Geneva talks do not bring any results, they will opt for a military solution. The leaders of several countries have already made such point blank statements. As I can understand, they share almost personal hatred to Bashar Assad. I do not think that the coalition led by the United States, in which Turkey is included, will let such reckless plans materialize," said Sergey Lavrov.