A Russian military adviser was killed in a mortar attack in Syria on February 1. According to sources in the Syrian army, the shelling could be conducted from the side of Turkey. 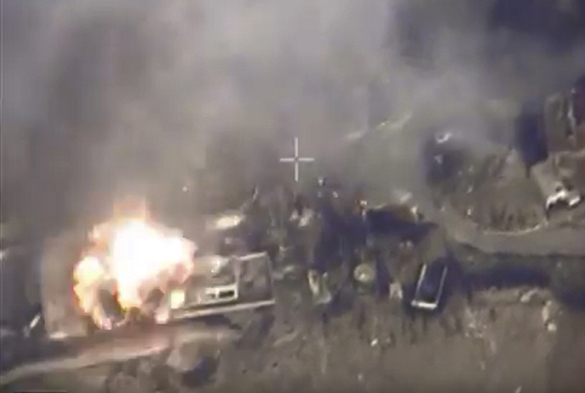 According to military correspondents Alexander Kots and Dmitry Steshin, the shelling of command posts of Syrian armed forces in the north of the country has become more frequent during the recent several weeks. Sources in the Syrian army said that the Turkish armed forces were involved in the shelling, in which a Russian officer was killed.

According to the Komsomolskaya Pravda newspaper, the military adviser died from multiple shrapnel wounds at artillery positions near the town of Salma. The Syrian army liberated the settlement in mid-January. The militants who were defending the town, were forced to retreat to the territory of Turkey.

On February 3, the Russian Defense Ministry reported that ISIL militants conducted an attack on a garrison of the Syrian Army, in which a Russian military advisor was killed on February 1. The officer, who was helping the Syrian military to use new weapons, was posthumously nominated for a state award.

A video was later exposed, in which Turkish artillery is seen shelling the territory of a foreign country.

Russian Defense Ministry officials stated that they were expecting a quick reaction from NATO and the Pentagon to explain the actions of the Turkish armed forces.

Prior to the incident, Turkey, without providing any evidence, accused Russia of violating its airspace. The Pentagon quickly confirmed the statement from the Turkish side, but failed to present any confirmation. Pentagon officials said that there were images that could not be exposed to the general public. To crown it all, Turkey demanded Russia should explain its actions to NATO.

"Those who warn us about certain consequences without investigating anything at first, need to think that they are falling into a trap that their Turkish partners are arranging for them," Major General Igor Konashenkov said.

"The Russian Ministry of Defence has recently received video footage from the Syrian General Staff that shows artillery hardware and large-caliber self-propelled artillery units on a Turkish frontier outpost. A few months ago, there were no weapons on the outpost at all. The video shows that the Turkish self-propelled artillery units are shelling the territory of the Syrian Arab Republic, particularly cross-border settlements," the official added.

"This is an irrefutable proof that confirms the fact that the Turkish armed forces shell Syrian border settlements from large-caliber artillery systems," Konashenkov also said.

Nothing has been reported about Turkish reaction yet.

Putin's spokesman Dmitry Peskov told reporters that Russian military men do not take part in ground operations in Syria. Peskov explained the presence of advisors with the need to train Syrian military men and teach them how to operate new weapons and military hardware.