Many Americans did not understand the remarks that US President Barack Obama made in his last State of the Union address about Ukraine. 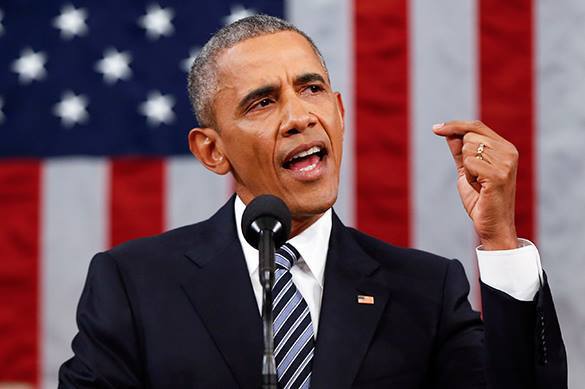 In his annual address to Congress, Obama said that despite the decline in the economy, "Russia is pouring resources in to prop up Ukraine and Syria - client states they see slipping away from their orbit."

According to RIA Novosti, the word "client" was not included in the original text of the speech and thus became Obama's impromptu.

"So Obama thinks Ukraine is a "client state" of Russia? No wonder he won't provide Kiev with defensive weapons," Jackson Diehl, a columnist with The Washington Post tweeted.

Former US Ambassador to Ukraine Steven Pifer, in his turn, tweeted the following:

According to Obama, no other country in the world is even close to the United States.

"The United States of America is the most powerful nation on Earth. Period. It's not even close," he said. "When it comes to every important international issue, people of the world do not look to Beijing or Moscow to lead - they call us."

Obama also voiced his conviction in the economic strength of the United States.

"Anyone claiming that America's economy is in decline is peddling fiction," Obama said. "So is all the rhetoric you hear about our enemies getting stronger and America getting weaker," he added.

Noteworthy, Russian President Putin has recently commented on Obama's similar remark from the past. In an interview with German publication Bild, Putin said that such derogatory remarks about other countries appear as an attempt to prove one's exceptionalism.

As a matter of fact, Obama's latest speech glorifies fascism. A fascist system is a political system of dictatorship that outlaws any manifestation of dissent and relies on repression. These days, fascism has taken a new form. Modern-day fascism wears a mask of democracy to promote brutal propaganda and endless wars. Since 1945, as many as 69 countries have suffered from the American version of fascism.

"Original" and revived fascism have one common feature - the cult of exceptionalism. "I believe in American exceptionalism with every fiber of my being," Obama once said. The statement evokes national fetishism of Nazi Germany from the 1930s.

The ideology of exceptionalism is the best brainwashing technique. It is an open secret that many Americans do not know that it was the Red Army that destroyed the Nazi war machine at the cost of 13 million lives.

"I lead the strongest military that the world has ever known.  And I will never hesitate to protect my country or our allies, unilaterally and by force where necessary," Obama told the UN General Assembly on September 28, 2015.

"We occasionally have to twist the arms of countries that wouldn't do what we need them to do if it weren't for the various economic or diplomatic or, in some cases, military leverage that we had - if we didn't have that dose of realism, we wouldn't get anything done, either," Barack Obama also said in an interview with Vox in early 2015.

Thus, Obama is convinced that the powerful army is the main tool of the United States. America interferes in internal affairs of other countries, and often does that by military means. Iraq, Afghanistan, Libya, Syria, Ukraine - which country is next?

Not that long ago, Western journalists wrote that the role of the world order guardian would better fit Russia than the self-absorbed USA. Russia has always been a more righteous nation that other European countries, and an increasing number of countries now seek Russia's protection and help, Politonline wrote.