US President Barack Obama has delivered his State of the Union Address to the  Congress. Speaking about his victories in foreign policy, Obama stated that Russia was isolated and the Russian economy was "in tatters." Obama spoke about successful negotiations with Iran and Cuba, but most Americans are concerned about different problems. Obama's illusions may cost a lot to the United States. 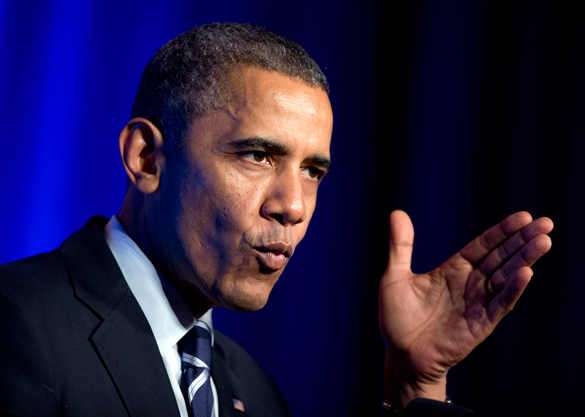 So whom has Obama torn to pieces?

It was Obama's penultimate speech to the Congress. In 2016, Barack Obama will leave the White House. This year, he condescended to talking about the "regional power" - Russia. It appears that he would not have even mentioned Russia in his most recent speech, if he had not previously named Russia as one of three major threats to mankind.

On January 21, Obama reiterated that he considered the policy of Russia in Ukraine "aggression," noting that a year ago, some believed that the actions of Russian President Vladimir Putin were brilliant demonstration of strategy and power. "Today, it is America that stands strong and united with our allies, while Russia is isolated, with its economy in tatters," Obama said.

"This statement about Russia supports the idea that the current state of affairs in the Russian economy, the problems of the Russia ruble and the falling oil prices are caused with the deliberate policy of the United States, - Konstantin Simonov, the head of the department for Applied Political Science at the Financial University under the Government of the Russian Federation told Pravda.Ru. As for the collapse of the economy, the devaluation of the Russian ruble, high inflation and declining purchasing power of the population are serious problems. "When I see an assessment such as "in tatters," I have a picture of closed companies and closed oil wells, zombies wandering in the streets, abandoned factories, and so on."

"The Russian economy grew by one percent in 2014. This is not a lot, but this is not decline. Where did he see those tatters? I believe that it is an attempt to convince the Russian people that the Russian economy has collapsed. The best reaction to Obama's words would be to look around to realize that this is not true. At the same time, people should be aware of the fact that there is an economic war being waged against Russia," the expert said.

Mikhail Chernov, a political scientist, deputy director of the Center for Strategic situation, does not believe that Obama's remarks about the state of affairs in the Russian economy are true to fact either. Sanctions and the so-called "isolation" can only contribute to Russia's revival. According to him, Obama's words targeted domestic American consumers, rather than Russian ones.

"This speech was aimed at the Republican Congress, which Obama does not control. In fact, what the Americans are now doing in relation to Russia, in relation to sanctions, is a heavy blow on the European Union in the first place. Both the sanctions and the Ukrainian crisis are meant to drive a wedge between Russia and Europe forever or, at least, for a very long time," the expert believes.

"Barack Obama has long been divorced from reality. He lives in his own world, - Alexei Mukhin, general director of the Center for Political Information told Pravda.Ru. - The sanctions pressure from the United States gave Russia an opportunity to diversify its foreign trade contacts and set new priorities. The ruble gradually breaks away from the dollar, and so do oil prices."

USA will punish itself

Following achievements in foreign policy, the head of the US administration proceeded to the talks on the Iranian nuclear program and the normalization of relations with Cuba. Obama said that a compromise with Tehran would be found until the spring of this year. Obama also called on the Congress to lift the economic embargo against Cuba and continue the new course to restore diplomatic relations with the island of freedom.

"What on earth is the president going to say about national security? He can stretch out Cuba, but unless the ghost of Che Guevara is a special unannounced guest, that's pretty small beer," Chris Stewart wrote in the article "Obama's speech time machine for liberal dreams" for Foxnews. "As surveys show, Americans are increasingly worried about the threat from Islamist militants and terrorism," the author continued. "The president doesn't have much good to say on that front. And the magnum opus of his foreign policy - a deal setting parameters for Iran's nuclear program - is looking very shaky today with word of a new Russo-Iranian military pact," Stewart also wrote.

"If the US continues to behave aggressively on the international arena, it will have nothing to discuss with Iran, - said Alexei Mukhin. - "In reality, the relations between Cuba and the United States have not improved. Declarations on the subject are good, but there is no direct political action aimed at the implementation of these declarations."

"As for Iran, it was a serious statement to make as there was a deadline set, - said Mikhail Chernov. - It does not mean that the US and Iran will be allies, but it does mean that chaos in the Middle East will intensify. It means that there will be an attack on Saudi Arabia, the Gulf countries. This is a very serious, more than a serious wake-up call for Israel too. Iran will not become an ally for the United States. Russia has recently signed a military cooperation agreement with Iran, and this is also a strategic achievement," the expert said.

A few words about domestic policies of the US president. Obama called the year 2014 a year of breakthrough for the US economy, and noted that the shadow of the crisis was in the past. However, an analysis from US experts speaks of the opposite. There is economic success only on the macroeconomic level, although neither real incomes of the population nor employment have grown.

Jobs are being created, but these jobs are of poor quality - seasonal and low-skilled jobs, William Galston wrote in his analysis of Obama's speech on Huffington Post. "He repeated his calls for costly new initiatives to provide affordable, high-quality childcare and two years of free community college. And his proposal to pay for them with higher taxes on the wealthy will meet a stone wall of Republican rejection," the author said.

Obama concluded his State of the Union speech by saying that the United States should combine military power with diplomacy, use force wisely and give an example to others. "Looking to the future instead of the past. Making sure we match our power with diplomacy, and use force wisely. Building coalitions to meet new challenges and opportunities. Leading - always - with the example of our values. That's what makes us exceptional. That's what keeps us strong," Obama said, having emphasized USA's superiority on others yet again. Will America be punished to its exceptional pride?

"The United States will punish Itself. The Americans believe that they have won the Cold War, they have attributed the victory to themselves and want Russia to behave as a defeated nation. This is an illusion that makes them weak," said Alexei Mukhin.

"I think that America will not be punished, - said Mikhail Chernov. - But I think that as a result of the impending war, a great war, the role of the United States in the world will diminish significantly. The US will remain on leading positions in many respects, but of course, it will not be the way it is now. The US is trying to maintain leverage and its decisive role in making decisions in the postwar world. The Americans think far ahead, they are well aware of the position that the country takes, so one can only envy the fact that there are great specialists in American departments," said the expert.

"The United States believes that the Americans conduct messianic policy. The Americans believe that the USA is the promised land, the best of the countries that always dictates its will to mankind, - said Konstantin Simonov. - Russia is now being punished only for questioning the impunity of US-led policies. We're trying to stop this, and it gives hope, in my opinion."