Ukraine to try to beat Russia at UN Security Council 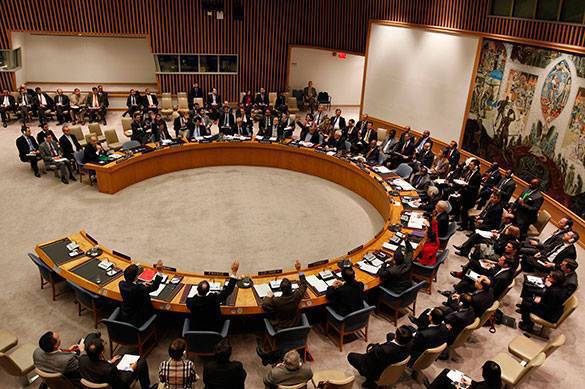 According to the official statement from the Ukrainian authorities, "Ukraine intends to contribute to  saving generations from the scourge of war."

Well said! It appears that Ukraine intends to wage war on the Donbass for several generations. The Poroshenko administration is unwilling to abide by provisions of the Minks Accord. Instead, Ukrainian officials say that the agreements that were achieved in Minsk would not be extended to 2016.To crown it all, Ukraine has been increasing its defense budget and the size of the army.

Not that long ago, Ukrainian President Petro Poroshenko named three scenarios for the Donbass. The first one of them is the "offensive of the Ukrainian Armed Forces, the military liberation of the territory and a crusade on Moscow." The second one is related to the separation of the Donbass from Ukraine. Poroshenko would not be involved in this process, he said. The third one is the retrieval of the Ukrainian sovereignty in the region. "This way is called the Minsk Accord," Poroshenko said.

All the three options imply the initiation of war. Ukrainian diplomats will have to think of something to explain their actions for unleashing it.

As for the veto right, Ukrainian diplomats say that one should completely abolish the right for blocking UN resolutions individually.

The West and Ukraine hope that Russia and China will always be a minority. True, as Russia will never accept any amendments to the Charter of the United Nations in this regard. Moscow will stick to the veto as hard as for the right to possess nuclear weapons.

Of course, Russia will have to deal with a variety of spectacles and sea of lies from Ukrainian politicians. The number of countries that allegedly support the Ukrainian proposal to restrict the right of veto will grow. Today, there are already 67 of such countries, whereas French officials say that nearly 40 countries are formally supportive of the initiative.

Russia must stick only to nationally-oriented policies at UN

The world has not created a mechanism, other than the veto right, to prevent a global war from happening. All the talk with reference to numerous local conflicts about the alleged ineffectiveness of the United Nations are not quite appropriate.

"The right of veto, which gets criticized so often, is, in fact, is the primary factor to ensure counterweight in any democratic system," said Russian Foreign Minister Sergei Lavrov.

Russia has been using its veto power very accurately. In the period from 1986 to present time, the the United States has taken the lead in the frequency of using the veto right. The States has used the veto right almost three times more often than Russia.

The prospects for Ukrainian initiatives at the UN Security Council are still vague because the Ukrainian diplomacy does not enjoy authority in the world. Ukraine's sanctions against European journalists have showed that the Ukrainian authorities were extremely incompetent in the field of international relations, senior fellow at the Institute for Euro-Atlantic Cooperation, Andreas Umland wrote on his Facebook page.

In addition, Poroshenko has launched a campaign to appoint his personally committed people as ambassadors.

"Our country, no matter whether it is the Russian Empire, the Soviet Union or Russia, always lives in the expectation of provocations against us, - Vladimir Stol, Doctor of Political Sciences, Head of the Regional Directorate of the Institute of Public Administration and Management, told Pravda.Ru. There is nothing fundamentally new and highly depressing for us here. Russia must not change anything for the status of non-permanent membership at the Security Council, whether it is Ukraine, Sri Lanka or anyone else. Russia is a great power with the status of a permanent member and one of the founders of the United Nations, the successor of the Soviet Union. Russia must conduct only nationally oriented policies and nothing else," the expert told Pravda.Ru.