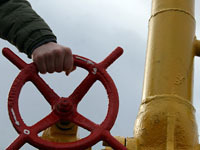 Russia and Ukraine are on the brink of another gas war. Kiev wants to revise the formula of prices on the Russian gas, claiming that it is unjustifiably high. Ukraine threatens to file a lawsuit against Russia at the Stockholm Arbitration Tribunal.

Because of the growing prices on fuel, the price for all consumers of "blue gold" from Russia is supposed to make up $450 per 1,000 cubic meters. Moscow is quite happy with the existent contracts that were signed in 2009-2010. The terms of those agreements stipulate the execution of all obligations, which Kiev took before 2019.

Russia is ready to revise them if it receives a mutually beneficial offer from Ukraine. Russia would also be ready to refuse from the market prices on petroleum products. Ukraine insisted on the last aspect during the reduction of oil and gas prices in 2008-2009.

For some reason, the Ukrainian president does not recollect that Russia had provided a discount of $100 per 1,000 cubic meters when signing the gas agreement in April of 2010.

The price issue is not the most important one, though. Ukrainian Prime Minister Nikolai Azarov announced Kiev's intentions to reduce gas purchases by one-third - to 27 billion cubic meters.

The Gazprom administration reminded him that the contract stipulated the payment for the delivery of not less than 33 billion cubic meters of the Russian gas every year regardless of the volume of purchases.

Afterwards, Ukrainian PM Azarov announced a new trick that Kiev invented. The trick was supposed to relieve the Ukrainian administration of the obligation to execute the contract. Yanukovych's team decided to liquidate the company Naftogaz of Ukraine to be able to revise the contractual terms.

Dmitry Peskov, the press secretary of the Russian prime minister, stated that it would be possible to revise the terms of the contract only if Gazprom takes Naftogaz over.

The previous Russian-Ukrainian agreements stipulated something like this before. The contract signed by Moscow and Kiev says that in case of reorganization of the Ukrainian gas company, the successor of this company is supposed to execute Naftogaz's obligations to Russia.

However, Ukraine is not willing to lose control over its gas system. Russia suggested its own variants to solve the problem. Russia particularly offered Ukraine to join the Customs Union of Russia, Belarus and Kazakhstan. Ukraine's Foreign Minister Konstantin Grishchenko rejected the offer at once.

"We believe that today, unfortunately, there are no real opportunities for Ukraine to partake in the Customs Union. For example, Ukraine is a member of the World Trade Organization, whereas our three partners are not yet," he said.

This is highly unprofitable for Russia, because this would give a greenlight to the flow of duty-free goods to Russia via the "Ukrainian hole." Moscow has already warned Kiev that it would have to take adequate measures, including the introduction of protective duties on the goods from the territory of Ukraine.

However, Kiev strongly refuses to join the Customs Union and offers the 3+1 format of cooperation with the countries of the union. This is not acceptable for Moscow. It appears that Ukraine is trying to intimidate Russia with political complications.

On September 5, when visiting Moscow, Ukraine's Foreign Minister Konstantin Grishchenko raised the seemingly forgotten issue of border demarcation with his Russian counterpart Sergei Lavrov. The Ukrainian minister also stated that Ukraine would like to start discussing the issue of the deployment of the Russian Black Sea Navy in Ukraine's Crimea.

In August, Ukraine set forth a number of claims on several constructions (including lighthouses) that are used for the needs of the Russian navy in the city of Sevastopol.

In the meantime, Ukraine's PM Nikolai Azarov excludes the opportunity for another gas war with Russia. According to him, Russia is Ukraine's strategic partner so Ukraine will continue to execute the existent contract until the sides reach a compromise.

Viktor Yanukovych is ready to take Russia to court anyway. "We have come across the situation in which Ukraine is losing a lot of money. We are convinced that we are paying too much today, and I believe that the court will be the last instance, when all our opportunities are exhausted," the Ukrainian president said.

"Our position is principal and any pressure against us in these issues is humiliating for us. We won't let this tone to be used in the talks with us. They drive us into a corner and then dictate their conditions. This is humiliating not only for me, but for the whole country, and I can not let this happen," Yanukovych said.

Do Ukrainian officials think that it is humiliating for them to sign the contract at first and then refuse from it? As for Russia, she is prepared for such a turn of events. If the contract is terminated single-handedly, Russia will file a countersuit against Ukraine.

It is curious that Ukraine is demonstrating strange indifference to its own citizens against the background of the gas scandal. It appears that Mr. Yanukovych is not humiliated with the fact that Libyan rebels took a group of Ukrainians captive on August 21. Those people can die any moment because the rebels consider them to be Gaddafi's mercenaries.

Ukrainian diplomats have already visited the detainees, but that was all Ukraine could do for those people. It seems strange that Yanukovych has not attached state importance to the problem. It is an open secret that the West protects and supports the Libyan rebels, so the Ukrainian president would have to negotiate the issue with the West. However, it seems that this dialogue is even more humiliating for Yanukovych than Russia's gas blackmail.