Malaysian Boeing Tribunal: Western Plan B to turn Putin into another Gaddafi

The UN Security Council has not adopted a resolution establishing an international tribunal for the crash of the Malaysian Boeing in the Donbass. Russia has serious objections to the tribunal per se, as well as to the process of investigation. The West has Plan B to make Vladimir Putin repeat the fate of Mummer Gaddafi. 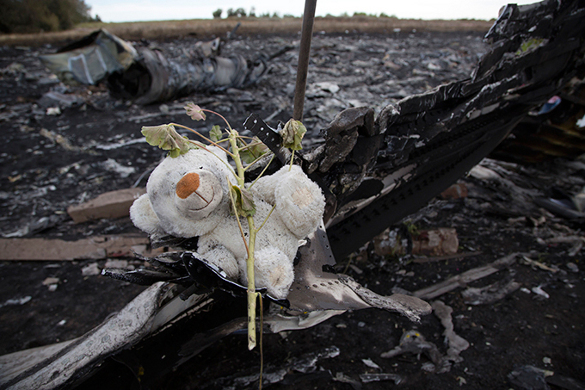 Eleven countries supported the resolution of the UN Security Council on July 29. China, Venezuela and Angola abstained from voting, and Russia vetoed the project. Russian permanent representative to the UN Security Council, Vitaly Churkin, said that the tragedy of the Boeing in Ukraine was not a threat to peace and security - it was a crime that should be investigated in an appropriate fashion, without politicizing the issue. Establishing the tribunal when nothing is known about the results of the investigation was an attempt to appoint the perpetrators, rather than to expose them, said Vitaly Churkin.

The Russian official was concerned about the fact that Russian experts had not had  equal access to the materials of technical investigation. In particular, the investigation ignored the satellite data of the Russian side, as well as the analysis and calculations made by Almaz-Antey on one of the version of the disaster, according to which the plane was shot down with a surface-to-air missile launched from a Buk missile system. To provide such information, Russia declassified the data on the tactical and technical characteristics of such missiles, the permanent representative noted.

Here is what Ukrainian Foreign Minister Pavlo Klimkin had to say on the subject: "There can be no reason to oppose the establishment of the tribunal, unless you are one of the perpetrators. The role of Russia in this conflict is very clear and well known. When I look at the Russian delegation, I feel sorry for them. We are talking about the people who committed the crime. Russia has ruined the draft resolution, but this abuse of the veto right will not ruin the hope of relatives of the victims, who still believe that those guilty of the tragedy will be found. If you fear the truth, then you will be alone, including at the UN Security Council. If you do not fear the truth, you will be released. These are not my words, these are the words of Scripture."

Of course, Mr. Klimkin, the truth will triumph, but, unfortunately, God has no deadline in respect of the inevitability of punishment. There is a good proverb: "God helps him, who helps himself." You, like Samantha Power of the US, are shedding crocodile tears for the children who died in the plane crash. What about the children who were killed in the bombings of the Donbass? Political farce against the backdrop of a terrible tragedy is utterly cynical.

Now the West will now try to turn up the results of the meeting into an anti-Russian campaign under the slogans voiced by Mr. Klimkin. However, the Ukrainian side stated recently that the five investigators (Malaysia, Australia, Ukraine, Belgium and the Netherlands) have their Plan B.

What can the West do to hold Russia accountable for the air crash?

What can the West do? Firstly, it may bring the issue before the UN General Assembly that may also adopt a resolution on the establishment of the tribunal acting on the basis of Resolution 337 called "Uniting for Peace." The resolution says that if the Security Council can not reach a consensus on issues related to peace and security, the issue can be submitted to the General Assembly that will make recommendations to the Security Council. The resolution has been used 12 times in the history of the United Nations, but was effective only once - during the Suez Crisis in 1956. To enact the resolution, one needs two-thirds of the votes of the UN General Assembly - 129 countries. In March 2014, delegations of 100 countries voted for the resolution condemning the reunification of the Crimea with Russia.

The second option: one can try to submit the case to the International Criminal Court in The Hague. Yet, Russia has not ratified the treaty for the establishment of such a tribunal. US withdrew its signature from the treaty, whereas Ukraine is not a member of the Club of Rome.

There is also an option to create tribunals on the basis of UN agreements and a specific state. For example, in 2007, the United Nations and Lebanon jointly set up a special tribunal to identify perpetrators in the murder of former Lebanese Prime Minister Rafik Hariri. In 2003, the UN backed the extraordinary tribunal for the case of Khmer Rouge leaders in Cambodia. Yet, such tribunals can also be blocked at the UN Security Council.

The fourth option is to judge on the national level - similarly to the Lockerbie case. This option was used during the investigation of the explosion of Pan American Airlines Boeing 747 in the sky over Scotland in 1988. The investigation was conducted by national prosecutors at a Scottish court at Camp Zeist, but it was Gaddafi that was put under pressure of Western sanctions and propaganda. Subsequently, a Scottish commission for the revision of criminal cases found that prosecutors "made mistakes" in the investigation and did not provide key documents that could acquit the Libyan national, who was convicted of the attack.

This is just a dream: to make Vladimir Putin disarm himself before the West, as Muammar Gaddafi did. He wrapped up the nuclear program and acknowledged responsibility of his intelligence services for the terrorist attack above Lockerbie, having paid two billion dollars in compensations to relatives of the victims.

"As many as 195 Dutch people were killed in the crash, but nothing has been said about the investigation for a year already. Why?" Oleg Smirnov, honored pilot of the USSR, member of the public council of Russian Aviation and Transport Supervision said.

"If the Ukrainian leadership had complied with the rules of the International Civil Aviation Organization, ICAO, that clearly say that the state was obliged to prohibit flights over areas of combat actions, the tragedy wouldn't have happened. Ukraine allowed planes to fly in the area, where military planes, missiles, bombs and shells were flying too. Europe and he USA supported Ukraine's stance on the events in the southeast of the country. The Ukrainian administration said that there was no war, and Europe and America supported Ukrainian officials. If there is no war, why introducing a no-fly zone?" the expert told Pravda.Ru.

"Malaysia is the owner of the aircraft. The airline as the owner of the crashed  jetliner receives a multitude of claims evaluated at millions of dollars. The Malaysians are interested in finding the culprit," Oleg Smirnov said.