Why didn't Russia use veto right on Libya?

Why did Russia not use the veto on Libya? Where is the money that was lent to Sarkozy by Gaddafi? What are the chances of a repetition of the "Libyan scenario" in Syria? Who set the West against Muammar Gaddafi and Bashar al-Assad? Said Gafurov, scientific director of the Institute of Oriental and African studies, answered these and other questions for "Pravda.Ru." 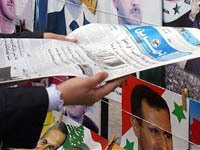 It is believed that Russia "washed its hands" in terms of the Libyan issue.

"Russia, as you know, abstained in the UN on the adoption of resolution 1973. The then President Medvedev later said in an interview with the Financial Times that Russia made a tragic mistake. Had we known that "resolution 1973" would be interpreted this way we would have voted against it. In fact, Medvedev has publicly stated that the West simply deceived Russia.

And I repeat, what is going on in Libya has nothing to do with democracy. All this can only be called a military coup and subsequent intervention. I do not have any other words."

What is the story with the money that Gaddafi has lent to Sarkozy?

"I do not think that Sarkozy kept the money lent by Libya in the central French bank. Some Libyan fund that must have been registered in Europe, most likely in violation of electoral laws of France, transferred the money for the election campaign of Sarkozy. There are documents from the French prosecutor's office in this regard, and we, I think, will get to see the end of this criminal case.

I think the Persian Gulf sheiks promised to buy the French government bonds to fill the gap in the budget of France, because the war is an expensive business. While it brought big profits to French companies, it is not a given that it was enough to plug the gaps in the budget, and now the West in many ways is holding back the repetition of the events in Syria in Libya because they simply cannot afford it."

Can the West repeat this war?

"The West would have calmed down if it were not for the East - Qatar and Saudi Arabia. The West should solve the problem with the budget deficit and the collapse of its economy, and the possible collapse of the euro area, and a war needs to be funded, but there are no funds. Huge amounts of money are coming from the Persian Gulf. Now each of Syria's enemies wants to destroy it with the hands of their allies. Even in Russia the Embassy of Qatar is paying large sums of money to Russian journalists, leaders of medium news agencies and the media.

Would you like to ask me what they are paying for? A representative of the Syrian rebels in Moscow, Mahmoud Hamza, regularly receives money at the box office of the Qatari embassy. Other Syrians, even oppositional, refuse to give their good name to the business fueled by Qatari money of the terrorists. Only those people who have fully compromised themselves receive money from Doha."

Will the "Libyan scenario" be repeated in Syria?

"The agreement, the plan of Kofi Annan that the Syrians need to solve their problems themselves, without outside interference, has to be executed. This is the position of Russia, and I fully agree with it. Syria must follow the path of democracy and freedom, and foreign aggression on the territory of Syria has to be prevented. The Syrian army and the government do not want to fight! Why would Syria's army shoot its own people? If they are able to, I repeat, prevent foreign interference, it would be a way out."

What are the ways of the West to unleash a war against Syria?

"There are many of them. From the formation of foreign legions, invasion of Syria from Turkey to the Libyan scenario with the bombing option. But I think none of the NATO countries would do it. After all, it's not just about the fact that the Syrians know how to fight. The fact is that they know, paradoxically, how to lose. The entire history of Syria is a chain of losses, after which they retreated and regrouped, continued to fight and eventually won in this way.

The Syrians have held free parliamentary elections. During the next presidential election, I am convinced that the opposition will not be able to have a candidate who would win over Bashar, and I doubt that the opposition will have time to grow a candidate in their ranks if it blows up bombs in the streets instead of campaigning. In the meantime, Bashar beats any candidate with the advantage of at least six to four. The situation in Syria is now much safer than it appears from the Western media and "Al-Jazeera," there is a normal life, children go to school, people work, earn money, but Bashar is the guarantor of the economic stability in their country."

Whose side will have the advantage?

"NATO is stronger than Syria. However, I cannot imagine the countries of the bloc deciding to use direct aggression. Even political statements by the heads of this block suggest that the countries belonging to NATO want the Syrians to solve their problems, and we should talk about a national dialogue. In Western countries, there is opposition fueled by Middle Eastern money who wants to destabilize Syria.

And you will notice that most of the world is opposed to NATO. Here's an example. There was a meeting of the Russian and U.S. Presidents Putin and Obama, but that same day, there was a meeting of the leaders of the BRICS. Nobody knows what they were talking about, there was no communique published, but it is known that four topics were discussed, including Syria, Iran, the IMF and the European crisis, and one of the most important four topics was Syria. The BRICS countries coordinate their efforts, nearly all of Latin America and all the moderate Arab countries are against neo-colonialism of the West. In Egypt, for example, the government is allegedly on the side of the rebels, but journalists in major newspapers are in favor of the Syrian government."