Ukraine’s Viktor Yushchenko expresses only his personal point of view making anti-Russian statements on behalf of the Ukrainian nation regarding Russia’s recognition of South Ossetia and Abkhazia. 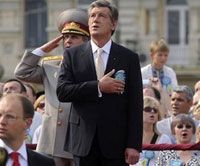 Sergei Markov, a prominent Russian scientist of politics, a United Russia deputy of the State Duma, said that the majority of Ukrainians do not share Yushchenko’s stance on the matter. Yushchenko deliberately tries to aggravate relations with Russia, the specialist believes.

“The majority of Ukrainians support Russia. There is only one person in Ukraine who does not support the Russian Federation – this person carries the title of the Ukrainian President. This is the most important fundamental contradiction of the Ukrainian policy, not the Yushchenko-Tymoshenko opposition. This contradiction may explode Ukraine’s policy,” Sergei Markov said in an interview with Novy Region news agency.

Yushchenko is an open-minded person, the scientist of politics said. “He utterly hates Russia and all things Russian. Without a doubt, he is a Russophobe. He just muddles things up: Ukraine is not Russia’s enemy, he is Russia’s enemy,” Sergei Markov said.

Sergei Markov rejected the concerns of many politicians, who believe that Russia would lay claims to the Crimea Peninsula after the recognition of South Ossetia and Abkhazia.

“Russia will not be laying any claims to the Crimea. We were forced to protect those people, whom war criminal Saakashvili was murdering. If Viktor Yushchenko opts to become a war criminal to exterminate Russians in the Crimea, Russia will defend them too. If he does not murder anyone then there will obviously be no claims,” Markov said.

“Shedding blood between Russia and Ukraine is a dream of such Russophobes as Yushchenko. This is what they are striving for and will be striving for. We are perfectly aware of that, and the people of Ukraine must know it too,” Markov said.

The scientist of politics added that one should expect more anti-Russian provocations that Viktor Yushchenko may initiate, whereas Russia will successively support its friendship with the Ukrainian nation.