Europe turns into cesspool of the world

The American propaganda machine never stops trumpeting about the imminent Russian threat. The American political elite portrays Russia as a state that threatens Europe in the first place. With this pretext in mind, the USA and NATO continue to militarize Europe. European populations do not show any protests, let along governments. Few people in Europe realize that it is not Russia that they should fear. Let's imagine the future of Europe in two or three decades. 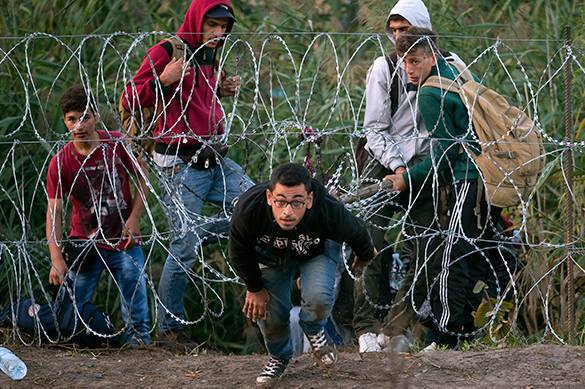 Could you imagine 20 years ago that all modern cities would be equipped with CCTV cameras that would be following you everywhere - in buildings, in trains, in buses and cars and everywhere else?  Nowadays, no one raises the question of violation of human rights and privacy. These issues have been skillfully replaced with concerns for personal safety and struggle against the terrorist threat.

Edward Snowden told the world that US secret services control nearly all of the world wide web. It would not be a surprise to know that NSA's secret laboratories continue the research for establishing control over mankind, and it goes about not only humans.

Every person will have chips implanted underneath their skin

For example, almost all pets in the West have chips underneath their skin. Chipped livestock is common practice in several countries of the West as well. In the US, this technology has been developing rapidly. People already volunteer to have chips implanted in their bodies so that police could find them in case of emergency. All US passports have integrated chips, like credit cards.

In fact, it is not Russian aggression that threatens Europe. Europe is facing the danger of Washington-generated Islamization that will deprive Europe of cultural and Christian identity. Why not throw good old Europe into the melting pot of nationalities and religions so that it is easier to control it?

There was a shocking news report last week about more than 70 dead bodies  of Syrian refugees in an abandoned truck in the east of Austria. Clearly, the flow of migrants from Muslim countries is larger than official statistics says.

For instance, Bulgaria, according to quotas, must accept about 3,000 workers. In real life, there will be 60-70 thousand of them this year, Bulgarian bloggers write. Many national governments of the EU warn that key provisions of the migration policy of Brussels are not working. However, Brussels continues to repeat the mantra of tolerance and multiculturalism. Is Brussels independent in making such decisions?

One may also wonder why refugees from Iraq, Syria and Africa do not go to Australia, the USA and Canada. Why don't they escape to neighboring well-to-do countries, such as Turkey, Lebanon and  Jordan? The answer is simple. In the United States and Canada, there is tough immigration legislation. Australia turns boats full of migrants to the "concentration camp' on the island of Nauru.  Turkey and neighboring Arab countries do not allocate public funds to maintain refugees.

Europe was chosen as a cesspool for those who flee from US-instigated destruction and wars for democracy.

All Orthodox nations are dying out, and Sunni Muslims are coming to replace them. Germany receives 800,000 inquiries for refugee status from Syria, Iraq and Afghanistan.

The United States of Europe: A few decades to go

Having been brainwashed with the concept of the Russian threat, the Europeans do not realize how the US is militarizing their countries. Washington has been building NATO command points and increasing its contingent throughout Europe. By the middle of the current century, European capitals may become Muslim-dominated cities.

Social explosions may lead to the creation of, for example, "the Party of Islamic Justice" that will win parliamentary elections in the United States of Europe thus giving birth to a new, 1-billion-strong country, with 600 million originating from Africa, the Middle East and Asia.

This Sunni state will leave traces of "traditional beliefs" in the face of Christians somewhere in the north. The army of this mega state will be based on American principles. The army will consist of the people, who will be ready to wage war against anyone. They will not have the European genetic memory of the two world wars. The model for the establishment of such a state has already been used in the creation of the Taliban and the Islamic State. There is even a small range ground in the center of Europe - Kosovo.

After 2030, financial oligarchy will initiate the collapse of China, start a conflict with Japan and launch the operation to conquer Russia. A Maidan-like revolution in Russia will be possible, as Russia's current education system will prepare a new generation of slaves that would be addicted to gadgets. If you take away the Internet from such people (the Internet is controlled by the USA), the crowd will crush the culprit. The war against Russia will reduce the global population and will give the Americans an opportunity to colonize Russia. The European part of the country will be annexed to the United States of Europe, while Russia's Asian part will become another state of the USA.

After the war, the world will be adjusted to America's standards. Under the slogan of developing  healthcare and anti-terrorist struggle, chips will be implanted under the skin of every human being. World's elites will start cloning themselves, while common people will work for the evolution of the human body.

The article may sound like a script for an apocalyptical motion picture, a fruit of someone's imagination. If so, think of the war in Ukraine that seemed to be unreal to all two years ago.

With free migration, mankind is doomed