In Switzerland, the parties that advocate the priority of the national state over the "European home," celebrate the victory of the "migration initiative" at the referendum. The new law is to limit the influx of EU migrants into the country. Many in Europe share the Swiss mood, but European officials do not notice or do not want to notice the obvious.

In Switzerland, it is enough to collect 100,000 signatures to call a referendum. As part of this direct democracy, 11 national referenda were conducted last year. The migration initiative was proposed by right nationalist Swiss People's Party (SVP / UDC). It was this party that initiated a referendum in 2010 on the deportation of convicted migrants. In 2011, the party succeeded in its effort to ban the construction of mosques in Switzerland. The Swiss approved both initiatives. Switzerland has refused to join the European Union twice, but in 2002, the Confederation concluded a number of agreements with the EU, in particular, about the free movement of people in exchange for access to the joint market.

A record 56 percent of voters took part in the referendum that took place in the country on Sunday, February 9. As many as 50.4 percent supported the proposal to return to the system of quotas for migrants. The text of the initiative determines that Switzerland should administer immigration of foreigners and  determine the amount of annual quotas in light of global economic interests of Switzerland and the principle of national preference. To put it in a nutshell, a Swiss citizen again holds an advantage over a foreigner for employment.

New quotas will be applied to all types of permits, including asylum-seeking applications. It is employer's application that will be taken into account, as well as the possibility of integration and self-sufficiency by source of income. The right for residency, the right to family reunification and social benefits may be limited. The initiative has priority over international treaties, and all old regulations should be reviewed within three years, Portuguese newspaper O Público wrote. 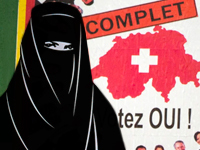 About 80 thousand people migrate to Switzerland ever year. One-third of them come from Western countries. Several months ago, the population of the Confederacy overcame the psychologically significant limit of 8 million people, of whom 23 percent were migrants. Switzerland is an economic oasis in Europe. Unemployment rate in the country is only 3-3.4 percent; average wages increased by 0.6 percent since 2002; the economy grows with the GDP growth of 2 percent in 2014. More than a half of Swiss exports target the joint market.

Nationalist parties and Euroskeptics were the first in Europe to react to the results of the Swiss referendum. The leader of the British UKIP (the Independence Party, which received 25 percent of the vote), Nigel Farage, said it was great news for those who treasure freedom and national sovereignty in Europe. "Mass immigration in Europe is a major problem and a major concern because it lowers wages and effectiveness of social insurance systems, and people get the impression that they are strangers in their own country," said Faraj. For the National Front of France, the Swiss referendum "marks a positive turn from "destructive dogma of open borders. " "It is as clear as the victory of the Swiss people against their elites, the technostructure of the European Union and well-wishers, who do not think specifically about any European country at all," the leader of the National Front, Marine Le Pen said. - This victory will strengthen the desire of the French to stop mass immigration and regain control over its borders with the European Union," said Le Pen.

European MPs and officials expressed concerns. Thus, German Finance Minister Wolfgang Schaeuble said that the results of the Swiss referendum showed that in the globalized world people experience great discomfort about absolute freedom of migration. "I think we all need to take this seriously," he added.

European Parliament President Martin Schulz said: "I am afraid that "yes " in Switzerland means a return to the debate on free movement of people in the European Union."

"They will get back to this question only if right parties obtain sufficient presence in the European Parliament," Alexander Tevdoy-Burmuli, a political scientist, associate professor of European integration of MGIMO told Pravda.Ru. - But the most what these parties can achieve is 27-28 percent of the vote, in only two countries. And in general and on average, it will be 2-12 percent - for 28 countries it's not much. With this presence in the European Parliament, they (the right) will not be able to impose a decision," said the expert.

Alexander Tevdoy-Burmuli believes that, although Switzerland is not a member of the EU, but the country is close to leading EU countries in terms of its values and socio-economic parameters. "So we may assume that sentiments in Switzerland are correlated with the sentiments in most European countries."

The results of the Swiss vote reflect the concerns of man Europeans, the expert said. "The immigration flow leads to socio-economic, political and cultural stress. Far-right parties in Europe want to see this trend in their countries, and it will be  expressed there at local elections. The May elections to the European Parliament will show to which extent this far right idea is strong," concluded the expert.

The EU needs migrants to sustain its growth, but common people see the situation from their homes and do not want to be tolerant towards migrants. The EU has values, ​​on which it was created. This is the culture of reconciliation and tolerance. These values are a matter of self-preservation of the European Union. Therefore, the negotiations between Bern and Brussels on the agreement on the freedom of movement from 2002 will be difficult.

The EU can make the Swiss follow common European values. The EU may overturn the whole first package of bilateral agreements, using the "guillotine principle," under which it is either all agreements of the package that work, or none of them.