With free migration, mankind is doomed 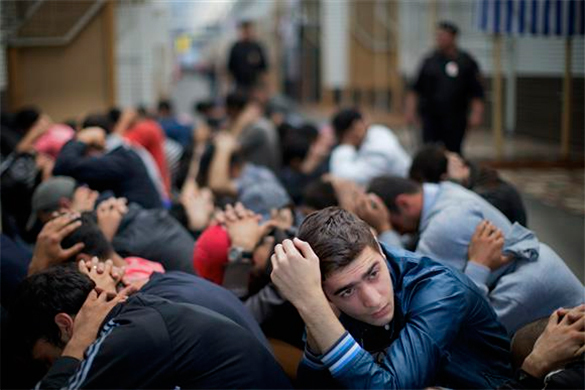 High population densities in the third world and the exponential rise in cross continental migration are symptoms of the biggest problem humanity has ever faced.

Due to rapid population growth over the last 50 years many parts of Central Africa, South Asia, and SE Asia are reaching unsustainable population densities. The wealth and affluence gap between North and South is a magnet attracting anybody who is able to travel outside their impoverished regions to seek better lives in any accessible developed country.

Without any local sustainable economy and economic opportunity, moving from these desolate overpopulated, and/or war-torn areas is the only hope and dream available to impoverished people. Survival is one of the highest forms of motivation within the human psych.

Hope for a better life is not a crime. Rather it's a symptom of something wrong on a global scale.

Cross region migration is now growing to levels that may in the very near future become uncontrollable. This is the real danger for the procrastinating 'developed world' today.

Also read: Ukrainian refugees in Russia want too much?

Historically, cross region migration has traditionally been one of the factors that have built and developed "new countries" culturally, economically and socially. Australia was built on migration, just as the United States was. Many countries have been supplemented with groups of people with a strong sense and need to work and prosper, which has arguably been of great benefit to the host countries.

However with the strengthening of national sovereignty around the world, 'free migration' has been snuffed out throughout the 'developed world', and most of the developing world as well. In addition the incumbent populace of most countries have developed 'anti-migration' stances, where governments are able to act strongly against refugees because it is politically favourable to do so.

During the last decade, the Australian Government almost succeeded with domestic electorate support to label 'hope for a better future', as 'economic migration' and almost have it classed as a 'crime'. Punishment for the 'hope' of the impoverished was to be imprisoned in some location within the Pacific, Indian Ocean, or SE Asia with very few rights or trial. Current Australian policy states that refugees who attempted to come to Australia by boat are imprisoned in harsh conditions in what the author termed as Australia's Guantanamo, never to be settled in Australia.

Disquiet over predominantly Muslim refugees arriving in Germany has led to demonstrations earlier this year. Just very recently a Finnish reserve councillor in Helsinki caused a storm of protest when he suggested that African men in Finland be sterilised.

Earlier this month in Southern Thailand, mass graves of Rohingya Muslims and Bangladeshi refugees were found in abandoned detention camps run by human traffickers, with further camps and mass graves found on the Malaysian side of the border a week or so later.

The growth of cross continent migration is bringing out repression, hate, criminal opportunism, and impoverishment all over the world.

This potential epidemic so far has been only tackled from the national, and sometimes bilateral perspectives. These attempts like Australian-Indonesian cooperation have been aimed at preventing the arrival of refugees, rather than attempting to solve the actual source of the problem.

Also read: Refugees: When the challenges are greater than the means

A realization by EU member governments that the refugee surge from Africa, and the Middle East is much larger than any one country can cope with, led to an emergency summit, which was held late last month.  Last year more than 150,000 refugees made it to Italy by sea, with more than 36,000 reaching Italy, Malta, and Greece this year so far. However, the summit reached a consensus that the majority of refugees should be repatriated. The summit was restricted to looking at treating the symptoms, where the communiqué stated that "our immediate problem is to prevent more people dying at sea, to fight traffickers, to prevent illegal migration flows and to reinforce internal solidarity."

So far all governmental responses appear to lack humanity. Responses also appear to avoid the causes of the problem. National sovereignty and lack of any international forum with the respect and 'clout' to deal with this issue is hindering any real attempt to solve the causes of cross continent migration.

The cross continental refugee crisis is a universal problem caused by uneven distribution of wealth and resources, rapidly growing populations in particular regions, which has made life for a percentage of the planet's population totally unsustainable.

If, and there is no evidence to indicate that this is a temporary problem, massive refugee migration continues, then a number of potential consequences may surely arise.

First, Conflicts are very likely to develop and erupt between neighbouring countries. There is a trend towards exclusion and repatriating problems back to the country of origin. Borders are likely to be closed in the future as the means to prevent migration. Some countries may go a step further and classify refugees as invaders. Tensions may grow along many select borders in the future.

Secondly, simply diplomatic 'spats' between neighbours could easily develop into much tenser situations. The recent tension over the Bali Nine executions was lucky not to escalate. This time a sense of maturity was maintained. What if out of anger the Indonesian authorities just started turning a blind eye to boats loaded with refugees departing for Australia?  It would have been a disaster for Australian authorities.

Thirdly, this inept attitude by most world governments is allowing the creation of perhaps one of the largest illicit industries yet, potentially much larger than narcotics.  We have seen people smugglers cruelty along the Malaysian-Thai border just in the last few days, and unfortunately there will be more to come. The people smuggling industry will grow almost unhindered while governments fail tackle the real issues in the countries of refugee origin.

Finally, as long as extreme inequality and poverty is not tackled in Africa, and South Asia, the developed world will remain open to invasion. Australia cannot afford to support hundreds of thousands of refugees in detention camps offshore. Nor can Europe, or the transit countries in SE Asia.

The current world demographics cannot be ignored, because inaction will create the biggest threat to national sovereignties that has ever occurred, much bigger than any war in the past.

The fact that the world has chosen urbanization of the prime means of habitation leaves many countries open to strangulation, if cross continental migration continues to grow exponentially. If extremely large numbers of refugees flock into already overlarge cities, many cities will not be able to take the strain. Infrastructure may just collapse, urban transport will be inadequate, unemployment dramatically increase, food and water shortages occur due to supply chain stress, making cities almost totally unmanageable. The sustainability of cities will come under threat.

Mass cross continental migration is indeed a universal problem that national governments cannot deal with individually. This is a matter that all governments need to deal with together. Humanity must learn to think as a planet and learn how to see above their respective territorial perspectives.

The decision making models that exist within the world today are self-destructive and may represent an even graver threat to humanity than the potential of nuclear war and climate change.