Snowden: Life in Russia is great! 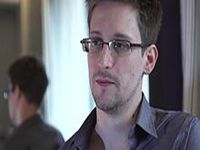 Snowden: Life in Russia is great!

Edward Snowden, the former NSA contractor, now living in the Russian Federation, stated to PBS program Nova that he is not depressed and drunk, as Michael Hayden (former NSA and CIA director) said, but rather, "I don't drink. I've never been drunk in my life."

Living in Russia for more than a year after the Russian government gave him asylum, Snowden is satisfied and happy and living with his girlfriend. His US passport was revoked, so why should he go back to a country that does not want him?