Most amazing facts you didn't know about streets and squares 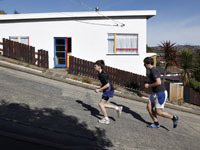 Map science has many unrevealed secrets. Quite unexpectedly, the experts working on a new electronic map of Novosibirsk found the shortest street in Russia. Earlier the street was not even on the map. Its length is only 40 meters. Yet, there are shorter streets in the world. Let's take a virtual walk through these streets.

The street found by Novosibirsk cartographers hosts only three houses. Formerly Venetsianov Street in Moscow was considered the shortest street in Russia. Its length is 48 meters. The shortest street in the world, according to the Guinness Book of Records, is located in Scotland in a small coastal town of Wick. Its length is only 206 centimeters. It hosts only one door - the entrance to a small beer garden or pub.

Pan-American Highway is the longest highway in the world. The length of the highway is approximately 48 thousand kilometers, and it connects the cities of North and South America, crossing the United States, Canada, Mexico, Peru, Argentina and El Salvador.   Parliamentary Street in the English city of Exeter is the narrowest in the world. In its most narrow spot its width is barely 64 centimeters. Originally it was called Little Street, and later, on special instructions of the Parliament, it received its present name. It was built in the 14th century, and its length is approximately 50 meters.

The oldest street in the world is in Egypt, it is a road to Giza. This is the oldest paved road over 4,600 years old, and its width is approximately two meters. The length of this ancient highway is 12 kilometers and it connects a quarry with the south-west of Cairo, resting on the embankment of the Nile. This road is believed to be used to transport stone blocks for construction and decoration of the pyramids and the road itself.

July 9th Street in Buenos Aires, the capital of Argentina, is the widest street in the world. It has six lanes in both directions and takes up an entire block in width. This street hosts many well-known buildings such as the building of the Ministry of Communications, Embassy of France, the statue of Don Quixote, and other monuments, including the Republic Square.

Very dubious title of the most crooked street in the world belongs to Lombard Street in San Francisco. At the very tricky part the street has eight turns, is one-way, and parking on it is prohibited.  A town in New Zealand has an interesting street called Baldwin Street. It is famous with its awful slope at 35 degrees. There is a logical explanation to this phenomenon. Most cities in New Zealand were once planned by the British who never visited the site. They would simply draw lines on a map, forming streets. Therefore, straight lines on the map at times turned into steep slopes on the ground. The above street is so steep that the upper part of it is now made of stone because asphalt in hot weather would just drain downhill.

The longest street in the world is Young Street in the Canadian city of Toronto, its length is 1,896 kilometers. This quirky street starts in the city center, on the waterfront of Lake Ontario, and, as if cutting the city into two parts, goes to the north, skirting the Lake Simcoe to the town of Cochrane. From there, the street, slowly twisting, turns west and ends near the border with the State of Minnesota.

The biggest square in ​​Moscow is Red Square. It occupies 75 thousand square meters. Tiananmen Square in Beijing, capital of China, is the largest square in the world. Its name translates as the Gate of Heavenly Peace. The entire area is fenced and there is only one entrance - next to a posh public restroom. Today, the square covers an area of ​​440 thousand square meters, extending 880 meters from north to south and 500 meters from east to west. Tiananmen is comparable in size to sixty soccer fields and can accommodate up to a million people. However, this capacity was gained only a half-century ago, The ancient emperors of China, albeit known for their love to extremely large objects (think the Great Wall of China) created the main square of China of a much smaller size. It was expanded to 44 acres by associates of Mao Tse-tung.

The smallest area of ​​Russia is located in St. Petersburg. One of the buildings of Vasilevsky Island has recently acquired a new plaque: "Fligelnaya Square - the smallest square in Russia." The area of the square is 23.5 square meters.  The longest circular street of Moscow is the Moscow Ring Road with the length of 109 kilometers. The longest straight street of the capital is Warsaw highway. Its length is 21 kilometers. The widest street in Russia is the Leninsky Prospekt in Moscow. Its width ranges from 108 to 120 meters.

The longest street in Russia is located in Volgograd. Its length is just over 50 kilometers. However, for the convenience purposes the authorities divided the highway in 16 streets. Another very long street is located in Volgograd. It is shorter "only" by 20 km. Residents of the city jokingly reassure visitors, saying that "there is nowhere to get lost in the city, we only have two streets." However, the title of the longest street in Russia is claimed by the 56-kilometer long Primorsky highway in St. Petersburg, created in 1974 out of 13 streets. Lazo Street in Vladivostok is also competing for the title "the longest." Residents of different cities do not have an unanimous opinion on this matter as this record has never been officially recorded.

However, the longest village street in the world is located in Russia, which is recorded by the Guinness Book. In the Buryat village Bichura there is Communist Street 13 kilometers long.   In conclusion, here are a few interesting facts found on the Internet. In Wales, on the island of Anglesey, there is a village whose name contains 59 letters. The name means "the Church of St. Mary in the hollow, overgrown with the white hazel, near the rapid whirlpool, near the Church of the Holy Tisilio and the red cave." The village has a website with one of the longest domain names in the world.  The longest maze of ice was built in the U.S. city of Buffalo. Construction material was hauled to the city for three days. 2,171 blocks of ice were used in the maze, each weighing 136 kg. A Guinness World Records inspector was invited to conduct the measurement, who calculated that the total area of ​​the maze amounted to 3,918.41 square meters.