Brazilian President Luiz Inacio Lula da Silva arrived in China for a visit. Strange as it may seem, there can be hardly any information found about the visit, which takes place on May 18-20. It brings up the idea that South America is working on an alliance with Asia’s largest states. It is not ruled out that China may eventually strengthen its influence near the borders of the United States and even set up Chinese army bases in the region. 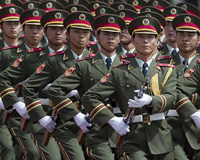 Brazil’s official language is Portuguese, whereas people in all other countries of the region speak Spanish. This peculiarity could probably be the reason why the country failed to obtain close allies in South America. The county has always stood alone from economic, political and military processes on the continent, although it has enormous natural resources.

China is also a lonesome state in its own region. This huge country has problems with almost all of its neighbors. China has been trying to find as many allies and followers as possible on remote continents. The Chinese government realizes that it may eventually become the prime enemy for the Western world.

Brazil and China established their strategic partnership in 1993. China has become the largest consumer of Brazilian goods. The Brazilian president stated prior to his visit to China that the volume of the trade turnover between the two countries could increase eleven times.

Brazil and China have a great deal of opportunities for cooperation in the energy field. For example, China signed a deal with Brazil’s oil giant Petrobras to deliver up to 160,000 barrels of oil a day to the petrochemical branch of China’s Sinopec and to PetroChina. In return, China offered Petrobras $10 billion for the development of its new enterprises.

The construction of Embraer Virtual Lab became Brazil’s most landmark achievement in China (Embraer is a Brazilian aircraft-maker, one of the world’s leading makers of regional passenger liners).

The cooperation between Brazil and China is mostly based on barter agreements. China may become Brazil’s most reliable partner in the field of defense cooperation, experts say. It goes without saying that China will do anything to set up its army bases in Latin America.