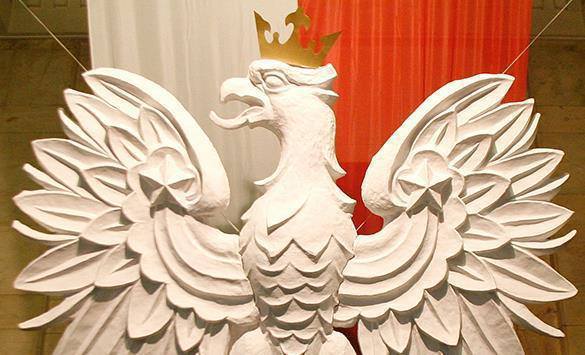 Polish President Bronislaw Komorowski arrived in Kiev. He will visit the Bykivnia Grave memorial - the burial ground for about 3,500 Polish citizens, who fell victims to the NKVD, the website of the Polish president says. It turns out that "the Ukrainians liberated Auschwitz, but the Ukrainians did not shoot the Poles?" The Polish foreign minister says nothing on the subject, because he is just as corrupt as the rest of the Polish elite are.

A few years ago, Komorowski laid flowers to the memorial plate on the building of the former NKVD prison in Kharkov, Ukraine, where Polish prisoners had been shot in the spring of 1940. In addition, during the celebration of the 70th anniversary of the liberation of Auschwitz, Poland's Foreign Affairs Minister Grzegorz Schetyna said that it was Ukrainian soldiers, who liberated Auschwitz-Birkenau concentration camp. According to Schetyna, it was the first Ukrainian Front that conducted the operation.

By that state of things, one shall assume that it was the Ukrainian NKVD officers, who shot Poles in Kharkiv and Bykivnia, was it not, Mr. Schetyna? The Polish elite brag their historical memory, which they also sell willingly, depending on situation.

For example, let's take the Volyn Massacre, when UPA (Ukrainian Insurgent Army) militants killed about a hundred thousand Poles. The tragedy marred bilateral relations for long, but in 2013, Ukraine and Poland officially reconciled on behalf of ex-presidents Leonid Kuchma and Aleksander Kwasniewski. The parties agreed that in 1943, it was not just Ukrainians, but Ukrainian UPA militants, who slaughtered the Poles. How do you like that, dear reader? Today, UPA's ideology is referred to as the national idea of ​​Ukraine. Bandera fighters are regarded as heroes of the nation. However, there is silence from the Polish side. One shall assume that Poland sold its historical memory for some cash.

"There is artificial history being created between Ukraine and Poland. They do not need some dark spots in that history, - Lev Klepatsky, Professor of the Diplomatic Academy of the Russian Foreign Ministry told Pravda.Ru. - They blame Russia for everything, but when it comes to the Ukrainian-Polish relations, they reformulate that to their liking. The main task is to create a Ukrainian-Polish tandem. History plays a subordinate role at this point," the expert told Pravda.Ru.

This explains the stand on the tragedy in Katyn, where about 14,000 Polish officers were killed within the scope of Stalinist repression. According to Polish Foreign Minister Schetyna, it was "Russian" NKVD officers, who killed them. On the eve of Catholic Easter, Komorowski said that "Stalinist criminals crucified the elite of the Polish people." "This crime will not be consigned to oblivion," he added.

One can hate Stalin, who exterminated millions of Soviet people in gulags. Why hating Russia if the country condemned Stalin's crimes back during the times of Nikita Khrushchev? Again, the answer is obvious - one needs to execute a political order that very well suits the Polish national idea of ​​reviving Rzeczpospolita (the Polish-Lithuanian Commonwealth).

"We used to be powerful in the 15-16 centuries, but in the 18th century, Poland was divided between Russia, Austria and Germany, and we have lived as a disintegrated nation for 120 years," Kwasniewski said in an interview with the Komsomolskaya Pravda newspaper in 2011. In this case, why can't the Poles understand the desire of the Russian people to reunite with the Crimea?

Kwasniewski says nothing about Poland's another defeat - in the spiritual realm. The Polish Unia has not achieved much in promoting Catholicism among Orthodox believers. The process was a success only in Galicia. Today, the sky-high ambition preserves, but it will never materialize, as the moral inferiority of the Polish elite is obvious. Using American money to turn the country into amorphous postindustrial space - this is not much big of a deal, to say the least.

Poland does its best to justify Russophobic behavior

Poland plays the game of words and terms to justify its Russophobiс behavior. Kwasniewski plays cunning speaking about differences between the victims of Volyn, Katyn and victims on the part of the Soviet Union in the war against Poland in 1919-1920, when more than 60,000 Russian Red Army soldiers were killed in Polish captivity. "The shootings in Katyn - is the political will of the state, and in other cases, victims were caused by circumstances," the ex-president explains.

It just so happens that Bandera fighters were executing the political will of Nazi Germany and then of the United States - they would not have lasted so long against "Stalin's regime" otherwise. The Polish regime violated basic provisions of prisoners of war (the provisions were adopted at the Brussels International Conference of 1874).

Members of the Polish elite cover their sins in every possible way. For example, the Polish elite prefer not to say a word about their anti-Semitism. Yet, during the Second World War, the Poles arranged Jewish ghettos and massacred Jews in villages.

"Judophobia or anti-Semitism, whatever you call it, is as customary for the Polish elite as Russophobia, - Kirill Anderson, Ph.D., assistant professor of the history of social and political doctrines of the Faculty of Political Science at the Moscow State University told Pravda.Ru. - If we list Poland's rivals  then from the point of view of Polish nationalists the Jews come first, and Muscovites are second. This is a tradition, a part of spiritual culture that, unfortunately, has not died away, but sometimes reappears in our times."

We, the Russians, often repent because we are Orthodox - this is the core of our faith. We prefer to remain silent about victims not to offend anyone. For American Protestants, the guilt complex is a sign of weakness. If you are strong and rich, then God loves you. This is why the US bombs sovereign countries before installing pro-American elite there. This is where true terrorism lies, and it suits the spirit of the Polish elite that helplessly try to punish the great Russia. It won't work.