World ignores Russia's role in the destruction of Nazism

President Vladimir Putin was on a visit to Poland on January 27th, where he participated in the ceremony marking the 60th anniversary of the liberation of Auschwitz. The ceremony, which originally promised to commemorate victims of Nazism, turned out to be another political spectacle, at which Polish politicians tried to show Russia its place. 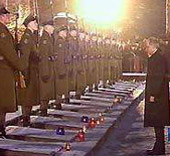 The Polish press launched the anti-Russian campaign a week before Putin's visit to Krakow and Auschwitz. Polish journalists wrote in their articles that Russia and Poland had started the new cold war, fighting for their influence on Ukraine and Belarus. It was particularly said that Poland would receive assistance from other members of the European Union. Polish adversaries of the war in Chechnya conducted an action of protest prior to Putin's arrival in Krakow. Polish protesters believed that Russia's actions in the Northern Caucasus were the “Holocaust against the Chechen nation.” The demonstration, however, was dispelled before the Russian delegation arrived.

Vladimir Putin's visit to Poland was supposed to start on Wednesday, although the presidential plane departed to Krakow only on Thursday morning on account of bad weather conditions. Other European leaders – Austrian President Heinz Fischer and French President Jacques Chirac – were also late with their arrivals.

When Vladimir Putin finally came to Krakow, he had to face a rather unpleasant surprise. It was Viktor Yushchenko, the newly elected Ukrainian President, who delivered a speech at the forum devoted to the liberation of Auschwitz prisoners. Forum participants with Polish President Aleksander Kwasniewski at the head rose in applause as they were welcoming Yushchenko. Viktor Yushchenko did not mention Auschwitz in the beginning of his speech, in spite of the fact that his father was a victim of the concentration camp too. The Ukrainian president started talking about accomplishments of the “orange revolution” in Ukraine. It is noteworthy that the first part of Yushchenko's speech seemed much more interesting to the forum participants than the promise “not to allow anti-Semitism, xenophobia and hatred between people in Ukraine.”

The Russian president found a peculiar way to respond to the attack. It became clear in Moscow that one of Auschwitz liberators and one of those people, who survived the hell of the Nazi camp, would accompany Putin in Poland. The two people, as well as other soldiers of the Soviet army, who liberated Auschwitz 60 years ago, were awarded with “60 Years of Victory in WWII” medals.

Vladimir Putin tried to prevent another portion of anti-Russian criticism in connection with a recent scandal, when a group of Russian deputies demanded all Jewish organizations in Russia should be banned. The president said that he was ashamed for displays of anti-Semitism in Russia. “Russian authorities will always use the power of law and public opinion to struggle against displays of anti-Semitism,” the president stated.

Putin also said in his speech at the forum that Nazism had its contemporary successor - international terrorism. The Russian president added that the struggle against terrorism should be as tough as the fight against displays ofanti-Semitism and xenophobia. “We must remember brutal lessons of the past. We must know their reasons and do everything possible to prevent anything similar in the future,” Putin concluded.

Organizers of the forum apparently saw that the somber ceremony was turning into a political battle. They showed the video recording of the speech from Pope John Paul II, who was born in Krakow. The head of the Catholic Church emphasized the huge role of the USSR in the destruction of Nazism in the world. The Pope also called upon everyone to remember the fact that Auschwitz victims were not only Jews, but people of other nationalities too.

”The history of the Soviet Union's participation in that war was complicated, but no one should forget that the Russians made up the greater number of people who tragically lost their lives in it. Hitler's plans envisioned full extermination of the gypsies too. Let us not forget that the lives of those brothers of ours were also taken away in this death camp,” the Pope said. “We should not pass ignorantly by the tombs commemorating the Russians and gypsies, who died in Auschwitz”, he Pope added.

The essence of Aleksander Kwasniewski's speech was similar to the one of the Pope. Only three leaders delivered their speeches on the territory of the former concentration camp – Kwasniewski, Putin and Israeli President Moshe Katsav. Other guests of honor – Viktor Yushchenko, Jacques Chirac and German President Horst Koehler – were standing silently. It is noteworthy that a lot of leaders of the anti-Hitler coalition ignored the forum in Poland. British Prime Minister Tony Blair preferred to go to Switzerland, Davos, instead of traveling to Poland. The US delegation was chaired by the person, who bid farewell to his position of the secretary the next day.

A session of the Russian Security Council took place in the Kremlin shortly after Vladimir Putin's return to Moscow. The meeting was devoted to the issues of Russia's foreign policy. The issue of Russia's relations with NATO was the central question on the agenda. The president was trying to smooth out the importance of contradictions with NATO, although they made the subject of his statement anyway.

Putin particularly stated that he approved the dialogue and cooperation with the North Atlantic Alliance, although the president acknowledged that Russia's views may not always coincide with NATO's. Putin implied Russia's negative attitude to further expansion of NATO through former republics of the Soviet Union, Ukraine and Georgia, first and foremost.

The somber ceremony in Auschwitz was supposed to help Russia and the West ease the situation that was exacerbated during the presidential election in Ukraine. However, the commemoration of the liberation of Auschwitz made the gap grow further on. The hosts of the meeting tried to make Ukrainian President Viktor Yushchenko become the central figure of the event, whereas many Western leaders did not come to Poland to revere the memory of fallen heroes of the Soviet Army. It became an expression of their personal attitude to Russia's role in the destruction of Nazism and to Russia on the whole. Time will show what will happen on February 24th, when Putin meets Bush in Bratislava, Slovakia.