Milos Zeman, the President of the Czech Republic, has recently created an important precedent, in which a vassal showed direct disobedience to its owner. Zeman is not a staunch ally of Russia, but he showed that his country was a sovereign republic, while the authorities of Eastern European countries have developed a habit of bowing their heads in obedience to the United States. 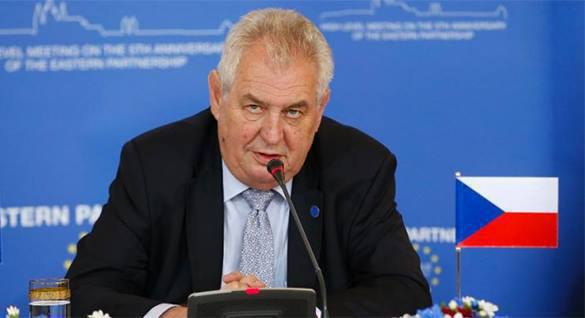 The story in question is Milos Zeman's reaction to the comment from US Ambassador Andrew Shapiro about his trip to the Victory Parade in Moscow. Shapiro, speaking on Czech television, said that the decision of the leader of one of the EU member states was "short-sighted", as it "discredited" common position of the West towards Russia.

"I'm not going to allow any ambassador to interfere with my travel plans," Mr. Zeman told a local news agency. "I can't imagine the Czech ambassador in Washington would give advice to the American president where to travel," said Zeman.

According to the Czech president, he is going to Moscow as a token of gratitude for not speaking German in the Czech Republic. "Without the Soviet Union, defeating Hitler would have been impossible. The price for that was 20 million lives," Milos Zeman said.

President Zeman said in an interview with online publication Parlamentni Listy on Sunday that the door of Prague Castle was closed to the U.S. ambassador. "Ambassador Schapiro has the door to the castle closed," the Czech president said.

"Zeman's statement once again proves that he lacks tact and diplomatic thinking," said the Speaker of the Parliament Premysl Sobotka. Sobotka stressed that Ambassador Shapiro was still free to come to the upper house of the Czech Parliament. The president does not want it to see him, but we do, stressed Sobotka.

"His reaction harms our relations with the United States, which is a key ally of the Czech Republic. The incident also confirms the reputation of the president of the Czech Republic as one of the main supporters of the Kremlin and its policies," former Czech EU commissioner Pavel Telička said.

According to Czech publications (that the Germans bought a long time ago), the main conclusion is as follows. Czech President Zeman sees no problem in Russia's policies, such as the "annexation" of the Crimea and the support of "separatists" in Ukraine. We are so tempted to say: do not see the problem in the fact that you are rewriting history under the pressure of the Americans?

"A fresh diplomatic row erupted Sunday between the pro-Russian president of the Czech Republic and the U.S., reflecting a widening gap between the head of the small European Union state and his own country's politicians, allies and public," writes The Wall Street Journal. The American newspaper is not right in opposing the whole Czech society to Zeman. A survey conducted by Czech website Tyden said that 50 percent of respondents agree with Zeman's position, whereas 47 - do not share the view of their president. Three percent were undecided.

Looking through comments in Czech newspapers, it becomes clear why President Zeman has so many supporters. The Czechs mostly support Zeman for his sovereign position. Many Czechs believe that the country that violates international law, bombed Yugoslavia, Iraq and Afghanistan, has no right to tell others how to behave in the international arena.

In addition, Czech citizens believe that the recent NATO march on the territory of the Czech Republic was demeaning. "We criticized the Soviet Union for its aggression, but what is the difference now? The same tanks, the same puppet government, but with a different sign," a poster wrote.

Interestingly, the media of neighboring countries have their own approach to the diplomatic row. For example, SME of Slovakia said that Zeman's comments were "a useless gesture." "We believe that Zeman's remarks against the US Ambassador were like a lonesome cry in the dark, an example of an unsuccessful mobilization against American soldiers who have recently marched through the Czech Republic."

The Slovak newspaper quoted statements from Slovak President Andrej Kiska, who tirelessly performs the functions of a US ally, criticizing Russia for its "contribution" to the conflict in Ukraine. Bulgarian President Rosen Plevneliev acts similarly. Yet, the Hungarian newspaper Magyar Nemzet shares an opposite position. "Zeman committed a very important act as a statesman, that should serve as a lesson for our country," the newspaper wrote.

Noteworthy, Hungarian Prime Minister Viktor Orban was vehemently opposed to Western sanctions against Russia. At the same time, he probably won't dare to come for the Victory Parade.

"The Americans, in principle, try to hold back all countries in their relations with the Russian Federation, without exception, and this pressure makes me seriously doubt the adequacy of decisions," Lavrov said.

"Zeman targets the provincial electorate, - senior researcher at the Academic Institute of Scientific Information on Social Sciences (INION), Yulia Shcherbakova told Pravda.Ru. - Zeman was supported in the northeast, in industrial areas, in the southwest and in agricultural areas. In other words, Zeman eyes common people, and he expresses their point of view."