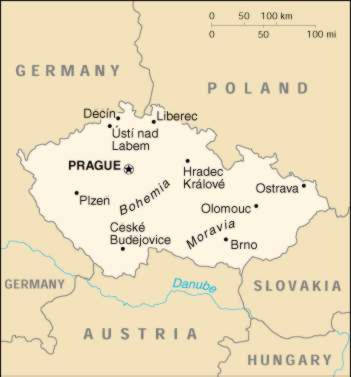 Today, a close look at the Czech Republic reveals not only the “final solution’s” new methods of conquest with preference for economic warfare over military conflict, but also that the beast is already busy at work gulping up its first victim.

Much akin to WWII, the Czech Republic leads again the Slavic world in falling prey to the Germanic sphere of influence.  Even prior to becoming a full-fledged member of the EU, the Czech Republic shows signs of willful abdication of sovereignty, unabashed servility to the West and effective Germanic-world annexation.  No matter how deftly spun in the collage of the broadening of democratic ideals and common markets, under the cheering media coverage lies a country stripped of its own rule, individuality, traditions and history with only one thing to offer today: a cheap supply of labor to its new Western owners.

Czechs have agreed to EU terms, which resonate with the 2nd class citizen treatment of Hitler's 1938 Bohmen Und Mahren protectorate.  While they agree to corporate salaries 40% that of their Germanic EU counterparts, they’re willing to pay the same sales tax rates.  While Czechs invite -- with open arms -- foreign investors to own, run and conduct business within their country, EU members such as Italy, France, Britain, Germany, and Holland are today quickly enacting discriminatory policies, which not only prevent Czechs from working within the EU outside of the Czech Republic but also audaciously prohibit Czechs from doing business or even living abroad without being subject to demeaning years of discriminatory red tape.

Under these EU terms, Czechs in their own country have become nothing more than a cheap human resource open for exploit by the EU business machine.

But the beast of the “final solution” demands larger than just economic sacrifices and Czechs indeed had to give up far more just to be this 2nd rate EU member.  In order to be considered for EU membership at all, they were forced to make a pact with the devil himself.  In an emotional embrace, Czechs "forgave" Germans for the WWII atrocities.  In one tearful scene, the unspeakable horrors of the Terezin concentration camp torture chambers and ovens, the still chilling Lidice massacre, the mass theft of children, the hundreds of thousands slaughtered for the pleasure of the Nazi savage were swept away and forgotten.  As if this Czech promise to Berlin never to bring up the horrors or, God forbid, ask for reparations wasn’t enough of an affront to the millions who suffered in the Hitler occupation, Czechs, for good measure added a public apology for crimes committed against Germans during the Nazi occupation of the Czech Republic.  This outlandish display of international subservience ranks at the top of the most desperately foolish political acts since the war itself.

Further, to make themselves even more attractive to the German world, Czechs relented to abandon truth itself.  Instead of celebrating the 9th of May as the official end of WWII when the Red Army liberated Prague from the Nazi occupiers, Czechs have done away with all the Russian historic links.  Russians are no longer celebrated as the liberators.  The Red Army tank #21, which stood on a pedestal in Prague as a symbol of peace brought to the nation is long gone and Czechs now celebrate the 8th of May instead.  In this amusing touch-up of history, Czechs celebrate themselves as their own liberators.  Of course, it goes without saying that western Czech Republic still proudly celebrates Patton, the man who wanted to arm Germans and turn them loose in 1945.

Czechs today also rely on Germans to tell them which national heroes are OK to observe and which they should rather forget.  Recently, Czechs were diplomatically told to ignore president Benes who took a radical anti-US/German stance in 1946 when Washington pushed for rearmament of Germany.  Feats that rub the German world the wrong way such as this one are now delicately downplayed by Czechs to please their neighbors.

To become the 2nd class citizen of the EU, Czechs have also had to surrender countless acreages of estates, woodlands, even historic districts of many towns including those of Prague to the German title claimants, many of which are known to have taken active part in the Nazi occupation.  Currently, the Czech government shows strain under the mounting pressure of official EU channels to make like a good EU member and either cede western part of Czech Republic known as Sudety to Germans or agree to other German-set reparations.

In order to get the EU membership, Czechs had to also abandon all fairness and in essence democracy itself.

To bring the national crime statistics to EU acceptable levels, the Czech justice system had to forsake fairness and resort to voodoo practices in which the most brutal crimes are mitigated into much lesser and more statistically palatable offenses.   As a result, violent murders are treated as manslaughters and are punished with a token sentence of which statistically only a third is served.  This is why it’s possible in the Czech Republic for a man who raped and kicked to death a woman to only get 7 years and for another man to walk away from an even more beastly murder with just a probation.

Meanwhile, since Brussels doesn't like communists, a recent exemplary trial showed that a Czech citizen is likely to face court charges and the possible punishment of 8 years of imprisonment for nothing more than belonging to the communist party.

Surprisingly, Czechs themselves are not against the total abandon of their Slavic ties in order to accept this new subordinate role within the EU.  With a few rare exceptions, Czech radio broadcast is overwhelmingly done in English.  All Czech media channels have adopted Western-style phraseology, even routinely dropping Czech in favor of mispronounced English.  Pretending to be Germanic, even perhaps acting as a fully ratified 51st US state, Czech media today makes no distinction between domestic and American news -- lumbering Washington and Hollywood snippets into the domestic news segments.

This post-revolution lack of national character has developed into a full-blown nationwide identity crisis that is beyond words today.  A strong drive has emerged among people, especially from large cities, to want to separate from the country’s traditions, history, style of living and even its language.  It is not uncommon to run into Czech citizens pretending to be foreigners or at least returned emigrants who can no longer speak Czech. Affecting a different language, albeit with obvious telltale accent and more than often meager grammar, they feign the inability to understand a word of Czech.   And perhaps more astonishing is the fact that this ruse is treated by others with admiration and awe.  The embarrassment of this spreading loss of national identity is quite inexplicable, as there exists no other nation that suffers such critical levels of self-confidence that it tries to hide its nationality.

Despite the promises of freedom and democracy during the Velvet Revolution, the Czech Republic has acquired once again an index of forbidden books and information material. On the list is the original blueprint for the “final solution”, Hitler's Mein Kampf.  Through this undemocratic act of despotism echoing the communist dictatorial regime, the Czech government is apparently attempting to bury the real source from which stems their current inequitable status within the EU.

The difference, of course, between Hitler’s “final solution" and the current economic warfare of the EU is that this latest Germanic bid to subjugate a Slavic nation is actually succeeding.