Last week Vladimir Putin visited Hungary and the Czech Republic. It was the first time a Russian leader had visited Hungary since 1992 and the Czech Republic since 1993. Putin’s visits to these countries undoubtedly are historically significant. Relations with these countries differ greatly from those that Russia has with Poland and the Baltic States. 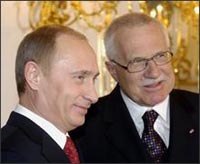 First of all, Poland differs from Hungary and the Czech Republic in that it is striving for the status of regional leader. Poland has its own geopolitical ambitions, connected with its aim of becoming the USA’s regional ally. This is seen in the way that Poland is acting towards the Ukraine and Belarus. The Baltic States have their own problems forging their self-identity. Poland and the Baltic States are trying to find their place in the modern world. At the same time there is a strong anti-Russia feeling in these countries and this gives rise to the current political line adopted by those in power. The Baltic States still need to sign an agreement regarding their borders and resolve such question as status of the Russian-speaking population. Poland and the Baltic States must consider the historical links that they have with Russia as regards the events that took place during the Soviet period. Secondly, Hungary and the Czech Republic were not part of the Russian Empire or the Soviet Union unlike Poland and the Baltic States. Czechs and Hungarians nowadays are not inclined to bring up the dramatic events of 1956 and 1968 which badly affected relations with Russia. The President of Hungary has announced that he is not allowing the celebration of the jubilee of the anti-Soviet uprising The Russian President has also made a similar gesture by announcing that “in the past there were a few problems such as the events of 1956, but in 1992 President Yeltsin gave his opinion and judgment of Soviet politics.” Vladimir Putin accepted Russia’s moral responsibility, but said that it was not possible to do the same in Poland and the Baltic States. One of the most important gestures which he made was to lay a wreath at a monument commemorating the victims of the 1956 events.

In the Czech Republic the events of 1968 are still keenly felt, even though officially all has been forgotten. Czech President Vaclav Klaus said in an interview with Kommersant, “It is impossible for a national to completely forget about such horrific events. On the other hand, should it affect today's political and economic relations between the two countries? I do not think that Russia is continuing the politics of Brezhnev’s Soviet Union.” The Czech President had already announced at a press conference, “We will not forget the past, but we know that the past should not be something that influences the future.” The Russian President noted that “we could not remember one problem, which has made us cease relations: such problems do not exist.”

The Russian leader’s visits to Hungary and the Czech Republic are very importantto other countries in Central and Eastern Europe and the West in general. Russia currently has two aims; to show that it is no longer the Soviet Union and is trying to clean up its image, but Russia is also striving to continue its role as the unique and stable partner in the energy sphere.

The main theme of the visits was to establish an energy partnership. Russia’s aim was to convince Hungary and the Czech Republic that they are a reliable gas supplier. Hungary was one of the countries that were affected by the recent conflict between Russia and the Ukraine over gas prices. The Russian President went to Hungary to state that Russia wished to remain the major supplier of gas to South and Central Europe. The Hungarian Prime Minster announced that his country was interested in Russian gas and that he would allow her to become the European centre for distribution. Energy supply was the topic under discussion during talks with the Czech Republic, three-quarters of whose energy is supplied by Russia. The Czech Republic is hoping for a long-term energy agreement with Russia since its current agreement runs out in 2013. Neither the Czech Republic not Hungary has spoken officially about energy-dependence. Vaclav Klaus has said that he does not see any problem in being dependent on Russia because there are opportunities to develop alternative sources of energy. He also stated that Russian “blackmailed” the Ukraine during the recent gas conflict.

Russia held economic talks with both countries. The Russian President said that Russia would Hungarian farmers to trade in Russia. He apologized for the fact that at the start of the 1990s Russia for ideological and political reasons stopped selling products. Putin said, “We came to an agreement with out Hungarian counterparts. In order to repay the debt we have replaced the products needed for Hungarian industry and economy.” There were many economic mistakes made as regards the Czech Republic. Russia promised to help in the building of a metro system, the modernization of the energy system, and production of trolleybuses.

It is possible to say that the visits to Hungary and the Czech Republic mark a new stage in relations with countries in Central and Eastern Europe. Russia’s foreign policy in this region has changed somewhat as regards relations toward the geopolitical ambitions of countries of Central and Eastern Europe. For Russia the visits to Hungary and the Czech Republic have a double significance, in both political and economic terms. In the first instance these visits are significant for those countries which, as Putin has said, still live “in the past” and which Hungarian President has classed as egoistic. In the second instance, Russia, as one of the world’s main energy suppliers, is continuing its search for partners and associates. Vladimir Putin aimed to convince Hungary and the Czech Republic that they are reliable energy suppliers. In the main the visits can be deemed successful.