Two years ago, the Moskovsky Komsomolets newspaper wrote about a 40-year-old man, Igor Sarkisov, who wanted to become pregnant and have a baby. Unfortunately, the man could not find a woman for having a normal family with her. The problem is that Igor has female genitals but male psyche and considers himself an absolute man. One woman wanted to have a family with him but changed her view after all as she could not imagine living with a man having no penis. When Igor was born he was a girl named Inna. 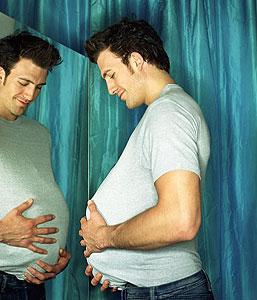 But when Inna became adult she felt uncomfortable being a woman. First, she began to wear men's clothes and then asked that other people must name her with the male name Igor. Some time later, Igor even managed to get a new passport with a new name officially registered in it.

But Igor would not change sex with the help of an operation. He says that transsexuals who undergo surgical operations have to take hormones during the whole of their rather short lives. Igor never had sexual contacts with men even being a woman. At that he emphasizes that his conduct, psyche and perception of the world are purely that of a man. Igor says he is a normal man wishing to have a wife and a child.

Now when Igor has failed to find a woman wishing to give birth to his baby, he wants to have artificial impregnation not to waste time as his age is approaching 40. Having saved enough money for the whole of the procedure, Igor came to a hospital as an ordinary woman. He told doctors that he wanted to have artificial impregnation without deflowering. But doctors at the hospital asked too many unwanted questions and charged too high prices for the operation that Igor went to another hospital and told doctors the whole of his story as it was. He explained that he was a man with female genitals. But still doctors treated him as a woman. To achieve his goal, Igor decided to endure everything even being treated as a woman. A doctor at the hospital recommended buying an ovulation test and coming to the hospital as soon as the test would be positive.

Igor faced a serious problem with choosing a sperm donor. Doctors would not tell details about donors. But Igor wanted to know what type of a man gave sperm for his artificial impregnation. Doctors only comforted Igor and said “the donor has higher education” which suited Igor.

The artificial insemination operation was terrible, and Igor was deflowered in spite of all of his requests. That made the man really indignant as he did not want anyone think he had sex with a man to get pregnant. Unfortunately, the operation was not a success and Igor did not become pregnant. Igor had three panic weeks when he had no notion if he was pregnant or not. After a short delay of menstruation it turned out that the insemination was not a success. Igor could not understand why it happened because the doctors had persuaded him everything was OK. “I think the doctors would not like a transsexual become pregnant,” Igor says.

But Igor states he never told he was a lesbian and still cannot understand why he did not become pregnant after the operation.

Doctors blame Igor for the failure of the operation: they say Igor gave up hormonal therapy ahead of the prescribed term as a result of which Igor again had a menstruation.

Igor does not believe the doctors' arguments are true and wants to file a suit against the negligent doctors. He wants to be reimbursed for the moral damage and for the lost virginity. In spite of the failure of the operation, Igor does not despair and wants to have artificial insemination at some other hospital.