Tall women are busy with making good careers and have fewer children, but this is not explained with their failure to find good partners. Researchers Denis Deady of Stirling University and Miriam Law-Smith from St.Andrew's University have arrived at a conclusion that the taller a woman the weaker her motherly instinct. Results of their researches prove that taller women highlight successful career and ignore childbirth than women of medium height. 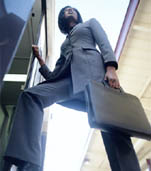 The researchers have also estimated that tall women would like to have fewer children and usually give birth to the first baby at their mature age. At the same time, these women are more career-minded and are more competitive. The psychologists published the results of their research in Personality and Individual Differences after they questioned 1,220 women where 679 women were at the age of 20-29 and 541 women over 45. The average height of the questioned women made up slightly over 165 cm while the average height of a British woman is 162 cm.

The researchers wanted to find any connection between height that is determined with sex hormones and psychological peculiarities of women. Results of the research suggest that there is some connection. It is generally believed that tall women have fewer children because it is difficult for them to find partners. But the researchers have refuted the opinion. They state that tall women have much testosterone, the masculine sex hormone that determines their masculine traits such as energy, emulative spirit and ambitiousness. The researchers also wanted to find out what importance career rise has for tall women.

Law-Smith, 27, 170 cm in height and having no children, says that the research does not insist that tall women are ambitious while short women care only about having children.

Many of successful women are rather tall. Fashion model Jerry Hall (182 cm) made her wonderful career thanks to the tall height. “At the age of 12, I was the tallest at school and did not like it. Later, I realized it was my advantage. Whatever I put on, it always looks effective,” the model says. She has four children.

Actress Saffron Burrows (182 cm), 32, has no children, was rejected a role in Grange Hill because of her tall height.

Tennis star Lindsay Davenport, 187 cm, once complained that “it is not easy to be that tall”. But the tall height helps her achieve success in tennis. The 29-year-old tennis player has no children but says she wants to have many.

Politician Janet Reno, 184 cm, the former US secretary of justice, once had to take her shoes off to be able to speak through a microphone during her public appearance in Florida. The 67-year-old politician has no children.