18 things men hate about sex most

Here they are, 18 most common mistakes women make in sex. Men want you to 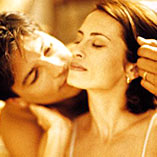 Every man has a similar list of women's mistakes. If you show it to your men he will agree with some of the points and probably add some more. You may notice that some of the points seem to have no relation to sex at all. However, this is what puts the men off and makes you less attractive. That is why these points are as important as sexual complaints.