Did Solzhenitsyn urge the US to nuke the Soviet Union?

In Vladivostok, someone hung a "Traitor" sign on the monument to Alexander Solzhenitsyn. It was later revealed that the act was committed by first secretary of the Vladivostok "Leninist Communist Youth League of the Russian Federation," Maxim Shinkarenko. In this context, we would like to pay attention to the story of Solzhenitsyn's betrayal of his motherland. 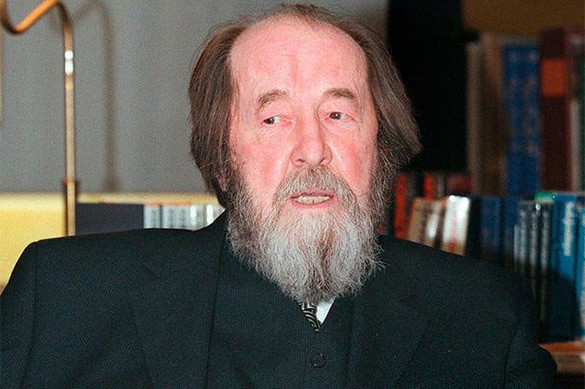 After the scandal in Vladivostok, the writer's widow appealed to the people of Vladivostok through the media. Her letter, among other things, said:

"After death, Solzhenitsyn's words are needed more than ever. He always called to look truthfully at one's history, know history, be proud of its worthy pages and also admit and repent mistakes and crimes. Instead, we short-sightedly and indiscriminately divide citizens into "one of us" and "traitors." As a country, we have neither discussed nor repented the crimes of the communist regime against our own people. As they say, we do not want to dredge up. But we have to admit that if we do not do it, it will backfire on us some day."

Haven't we done penance? Even Khrushchev repented the crimes of Stalinism at the 20th Congress of the Communist Party, which, by the way, made Solzhenitsyn's freedom and literary activities possible.

In his revelatory rage, Solzhenitsyn was "writing only in black colors" in almost all of his more or less well-known works that eventually made him a Nobel laureate as one had to encourage such a "volunteer" from the Soviet Union.

Today, many still discuss the question of whether Solzhenitsyn was calling for the atomic bombing of the USSR.

Solzhenitsyn wrote in "The Grain Between the Millstones:" "My God, I was not calling for war, the US press distorted it, but that's how it reached our compatriots ... Try to prove them otherwise now." (The New World, 1999, N 2, p. 83). In 1975, he believed that we should not fight with the United States. According to him, we needed the policy of "open hand."

Three years after his appearances in the US, Solzhenitsyn wrote in "The Grain" that America no longer seemed to him as an honest ally of the Russian liberation. According to US Congress, it was not communism, but Russia that was the global oppressor, and the writer realized that.

As it  turns out, the author of "The Gulag Archipelago" woke up in three years. He realized that the West could only care less about what kind of regime there was in Russia. It was Russia that was the prime enemy.

However, the "patriot" did absolutely nothing to reach both the world and his country fellows to tell them about it. Well, let's assume that Solzhenitsyn was angry with communists and did not want to return to the USSR. If he had announced his "revelations" in the USSR during the 1980s, when the Union was strong, Solzhenitsyn would have become a national hero.

However, during all those years, the "Russian patriot" was peacefully living in Vermont, guarded by US special services, writing books exposing the crimes of the Soviet regime. Naturally, he did not mention a word about the achievements of the Soviet regime  - free medicine, free education, free apartments, very low public utility tariffs - nothing.

Was it the US press that "distorted" Solzhenitsyn about the call for a nuclear war against the Soviet Union or was it something that he said indeed? It appears that it was Solzhenitsyn who distorted himself decades later.

In order to understand the true beliefs of this fierce anti-Soviet fighter, one can read his novel titled "The First Circle" that he had written long before emigration in the late 1950s, when Solzhenitsyn was a patriot and a citizen of the Soviet Union.

The novel starts with a story of a Soviet diplomat Ivan Volodin who calls a US embassy and says that Soviet intelligence was working to obtain blueprints of a nuclear bomb. Of course, "Washington's best friend" is portrayed as a positive character. At the same time, Soviet security officers, like in all other books that Solzhenitsyn penned, are described as beasts, rather than humans.

The plan to nuke 52 Soviet cities during Truman's presidency was quite real and did not materialize after Soviet physicists, with the help of intelligence officers, built a Russian atomic bomb in 1949.