Writer Alexander Solzhenitsyn has died of heart failure, his son Stepan Solzhenitsyn said Monday. He was 89. Born December 11, 1918, in Kislovodsk, Solzhenitsyn served as a front line artillery captain during the Great Patriotic War. 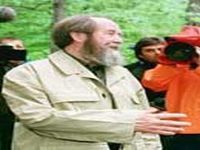 A noted and outstanding Russian writer, historian, poet and public figure, Solzhenitsyn obtained a wide reputation, with his literary works (as a rule, touching upon sharp social and political themes) and also with works about the history of Russia of the XIX-XX centuries. He was awarded the Nobel Prize for Literature in 1970.

He was a former dissident during several decades (sixtieth, seventieth and eightieth years of the 20th century) actively struggling against some of the wrongs in society. He also caused consternation when he greatly criticized Western culture for what he considered its weakness and decadence. He expressed great disappointment with the so called western “democracy” and rejected it as a model for other nations. He also expressed disdain for capitalism.

He returned to Russia in 1994, and made a 56-day train trip across Russia to become reacquainted with his native land. He later expressed great disappointment that most Russians hadn't read his books.

Solzhenitsyn agreed with Vladimir Putin that Russia was finding its own path towards democracy and said, "We need to be better, so we need to go more slowly." When Yeltsin awarded Solzhenitsyn Russia's highest honor, the Order of St. Andrew, he refused to accept it. He blamed President Boris Yeltsin for the economic problems of Russia, his inability to stop the expansion of NATO to Russia's borders and the rise of oligarch billionaires.

Condolences of President of Russia Dmitriy Medvedev were given in connection with the death of Alexander Solzhenitsyn to his wife, Natalya, and to the three sons of the writer including Stepan, Ignat, a pianist and conductor, and Yermolai. All live in the United States.