He readily agreed to cooperate with the KGB 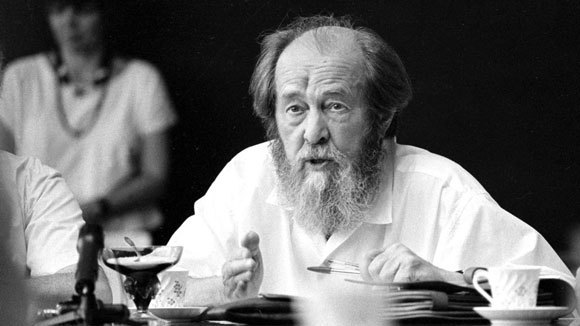 The name of the Russian author and dissident in the US, Alexander Solzhenitsyn, that seemed to be forgotten after the 1990s' euphoria, comes up from time to time in the mass media. The author is especially loved by provincial mass media, as it always considered honor for a small town to have any kind of connection with important figures of the country. The Russian city of Bryansk is not an exception in this case. In different times (with an interval of about ten years) two publications appeared in the city, a booklet of local journalist Vasily Shpachkov and an article in the AiF-Bryansk newspaper (which mostly repeated the booklet). Both publications concerned relations between Alexander Solzhenitsyn, who wasn't a Nobel Prize laureate at that time, and Nikolay Vitkevich, the head of chair at the Bryansk Technical Machinery Construction Institute. Both authors told about "friendship" between the two men, about their meetings at the front, simultaneous arrests and about the reasons of subsequent breakup.

Here is a quotation from Solzhenitsyn's works: "Looking back at my inquest from the time of imprisonment, I saw I had no reasons to be proud of it. Certainly I could have behaved more firmly and dodged better. In the first weeks, I experienced derangement of mind and low spirits."

Soviet army captain Nikolay Vitkevich was arrested right at the front, near Berlin on April 22, 1945. Special services blamed the officer of his anti-Soviet attitudes and confirmed the guilt with letters he wrote to and received from Alexander Solzhenitsyn, an old friend of his since his school years.

The friends moved apart at the very beginning of war: Vitkevich defended the Soviet capital in trenches, and the other, Solzhenitsyn had been first recognized unfit for army service. Later, he all the same came to the front. In 1943, the friends met. They talked and argued about politics a lot, spoke about political leaders and about the reasons of the 1941 war catastrophe. Nikolay Vitkevich told the Bryansk journalist who issued the booklet about Solzhenitsyn: "We reconsidered our views to such extent that even called the supreme commander-in-chief a "sheep". And that wasn't the harshest criticism to him at all." In the spring of 1944 the friends got separated again, but still continued their polemics in letters. As a result of this kind of correspondence, captain Nikolay Vitkevich was sentenced to ten years of imprisonment according to the clause 58-10 of the Soviet Criminal Code.

But the captain was mostly struck not with the fact of the sentence. An investigator working with the case showed Nikolay a hand-written confession of Alexander Solzhenitsyn. The main idea of Solzhenitsyn's confession was that Nikolay Vitkevich, Kirill Cimonyan (another school friend of theirs) and Natalya Reshetovskaya (Solzhenitsyn's wife) in agreement with some Vlasov organized a criminal group to slander the leaders of the Communist Party and the Soviet government.

Kirill Simonyan (a prominent scientist who was at head of several clinics in Moscow) was summoned to police in 1952 and was showed the thick copy-book of 52 pages written by Solzhenitsyn's hand. On every page of the confession, it was said that he, Kirill Simonyan had always been anti-Soviet since his childhood; he demoralized all of his friends, especially Alexander Solzhenitsyn.

Natalya Reshetovskaya, the wife of Solzhenitsyn whom he had also mentioned in the confession, later told who that Vlasov was. As it turned out, Alexander Solzhenitsyn defamed an accidental fellow traveller, a sailor with whom he had met in a train.

When in several years Professor Simonyan  openly criticized Solzhenitsyn's views, the author expressed his regret in the book "The GULAG Archipelago": "I wish you were imprisoned then! You missed a nice opportunity." In his interview in 1992, Alexander Solzhenitsyn regretted that the investigation on the case had been negligent. He said that on the basis of the confession he had given, at least 5 people more from his division could havebeenimprisoned.

He told about the horrors of Soviet concentration camps, but in fact he himself got off lightly: he was sentenced to a rather short imprisonment as concerning his indictments (the clause 58-11, confession of an anti-Soviet group, was even more threatening that the clause 58-10 that implied property confiscation and deprivation of all awards).  Nikolay Vitkevich was exiled to the northern city of Vorkuta, which was a very long way, and many people died on the way to the place. But Alexander Solzhenitsyn wasn't even pressed by the special services for cooperation, he readily agreed. For this very  reason he was sentenced to a smaller term, eight years. He spent the period in Moscow's Butyrka prison where he had an opportunity to order books from the central Soviet library, and the rest of the period he spent somewhere in the Moscow region.

Alexander Solzhenitsyn and Nikolay Vitkevich had a chance to meet after the war once again. The Soviet captain wasn't angry with his "friend", however, he couldn't any longer treat him as a normal man.

In the booklet by Bryansk journalist Shpachkov the author told about Solzhenitsyn's "heroism" a lot, but documents proving this conduct (information against other people, to be more exact) were never published in Russia.

The most notorious instance was Solzhenitsyn's denunciation that further helped the authorities to violently suppress a strike of Ukrainian nationalists in a camp in Ekibastuz (former Soviet republic of Kazakhstan). As was traditional for socialism, all documents in the archives of the state security services were and are carefully kept there. It is a very nice document indeed that allows to exert pressure upon the Nobel Prize laureate and "the conscience of the Soviet nation". At that, the KGB allowed two foreign journalists to see the document, which both certainly used for their own purposes. The document was information provided by some man who called himself Vetrov. The information concerned preparation for an overturn in a camp, all details and the organizers of the action. What  is more, Vetrov also informed how exactly the overturn was planned to happen. The author of the denunciation once again asked the special services to secure him against criminal who exasperated him with suspicious questions.

One of the foreign journalists, Germany's Frank Arnau, a criminologist by profession, analyzed the document. He says that the authenticity of the document is proved by the identity of handwriting of some invented Vetrov and actual Solzhenitsyn, by the manner of writing and other typical details which were alike in his books and in the above mentioned denunciation. The journalist also emphasized the likeness of Solzhenitsyn's psychological and moral characteristic features over the whole period of his defamatory activity. Researchers say that this Vetrov acted in a big way: he gave information against all friends from his young age; he even defamed his fellow traveller Vlasov, not to speak about his friend Kirill Simonyan, the denunciation against whom made up 52 pages.

As concerning the denunciation about the overturn organization, the whole group of people mentioned in the denunciation was executed by shooting. After that, "Vetrov", under which name Solzhenitsyn wrote his denunciations, was taken to a camp hospital and then moved to another camp.

True Mark of the Beast

US threatened by Russia's Christianity

Author`s name Michael Simpson
15:17
Armed Forces of Ukraine drop chemical bombs from drones - DPR governor
14:59
Russian Olympic ice dancing champion develops gangrene of his leg
18:54
Ukrainian soldier uses chainsaw and fire to release US howitzer from ice trap
18:30
Onet: Ukraine will lose in six months due to shell shortage
17:36
Russian troops defeat Ukrainian troops in Zaporizhzhia region
14:50
Number of foreign mercenaries in Ukraine continues growing
14:17
Russians buy more than 50 tons of gold in 2022
13:57
Russia will not talk to Ukraine. Russia will talk to the West
13:34
USA's plan to give 20 percent of Ukraine for peace hoax
12:51
Medvedev: Ukraine as a state to be devastated, go bankrupt and be turned into colony
Drone with large air bomb on board explodes over Kaluga in western Russia