Tens of children dream to escape from Norway 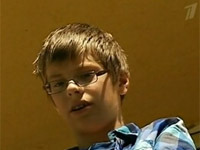 Thirty Polish children forcibly separated by the Norwegian care service from their parents asked a Polish detective who helped Russian boy Sasha Frolov escape from Norway for assistance. Sasha asked for a permission to speak at a meeting of the Ombudsmen for Children in Europe that will be held in Warsaw. The boy wants to tell them about the unprecedented violence exhibited by the Norwegian care service towards immigrants' children.

Read the story of Irina Bergseth:

Russian boy becomes sex slave to his own father in Norway

Norway's child protection agencies do whatever they want to helpless children

All these facts were stated in a letter of the representatives of the Russian speaking community in Norway addressed to the President of Poland, the Prime Minister and the Commissioner for Children's Rights in the country. 19 people who signed the message are asking the top management of the Polish Republic to assist the 13-year-old Russian boy, Sasha Frolov, who had escaped from Norway to avoid the psychological and physical terror of Barnevern (local child protection services).

Sasha appealed to the Polish detective Krzysztof Rutkowski to help him get out of Norway, where he was forcibly separated from his mother and sent to a foster family. The detective took the child to Poland, and from there he was to go to Moscow with his mother. However, Norwegian authorities intervened in the case and demanded that Poland return the child (a citizen of Russia) back into the country.

When the boy was told that he may be returned to Norway, he lost consciousness and spent two days in a Polish hospital. The letter reminded that under the Convention on the Civil Aspects of International Child Abduction of October 25, 1980 (article 13 of part 2), judicial or administrative authorities of the State in question are not obliged to order the return of the child if an individual, institution or other body proves that there is a serious risk that such return will put the child at risk of a physical or psychological harm or otherwise create an intolerable situation for the child (the loss of consciousness at the crossing, as well as placement in a hospital for two days clearly indicate how real this danger is).

In addition, the Convention states that the judicial or administrative authority may refuse to return the child if the child was firmly opposed to such return, and reached the level of maturity at which his/her opinion should be considered. It is clear that at the age of 13 and a half, the teenager is quite capable of making an informed choice as to where and whom he wants to live with. Moving the child into another country against his will means violation of his human rights.

This is particularly true considering that Sasha has repeatedly stated his desire to live with his mother in his letters to the Russian consul in Oslo, the governor of Oslo, and the local chief of police. Now by the decision of the local court the child is temporarily placed in a foster Polish family. He will stay there until the court issues its final decision on the fate of the child.

However, Russian authorities also participated in this dramatic case. The Russian Foreign Ministry posted on its website a statement that its employees are providing all possible assistance and support to Sasha's mother, Irina Bergseth. A representative of the Investigative Committee of Russia went to Poland to meet up with Irina and begin to investigate the sexual abuse of her youngest son by her ex-husband.

Fortunately for Sasha, the Polish foster family treats him with love and care. If the Norwegian adoptive parents kept the boy hungry, not allowing socializing with friends and going to school, in Poland the situation is the opposite. The authors of the letter thanked the Polish authorities for the fact that the boy was placed in a Russian-speaking foster family that welcomed him in a difficult situation.

"The child was provided with care and love, he was able to communicate, read and write in his native language. He began to study the Polish language and spelling. The Russian boy is given four hot meals a day, he got stronger, recovered, and found new friends. Among his Polish friends Sasha feels happy. The Polish authorities paid special attention and respect for the boy's Orthodox faith, his Russian traditions and culture," the letter stated.

However, this is not about saving one Russian boy and helping him return home. The problem has long gone beyond a single country. The mother of the boy Irina Bergseth was addressed by nine Russians from whom Norwegian authorities took away 17 children aged from two days to 15 years.

Polish families living in Norway also suffer from Barnevern. The first child who escaped from Norway was a Polish girl Nicola. It is because of her story Sasha Frolov learned about the Polish detective Krzysztof Rutkowski. After the Polish and Russian media reported on the Russian boy's escape, the detective was asked for similar assistance by another 30 Polish children.

It is clear that the situations when children are forced to look for unusual ways to protect and rescue themselves cannot be hushed up as the internal affairs of Norway. On September 10 of 2011 Warsaw will host a meeting of Ombudsmen for children of all European countries, including Russia. The letter asked the Polish authorities to allow Nicola and Sasha Frolov to speak at this meeting.

The children were the ones who expressed such a wish. They want to tell their stories of forceful separation from their families on made up charges and placement in local foster families who treated them poorly. "With this open appeal to the authorities of the Republic of Poland, we intend to draw attention of the top authorities of the country to the specific facts of flagrant injustice towards Russian and Polish children and children of other nationalities who found themselves in Norway and are being forcibly removed from their biological families by Barnevern system and subjected to cruelty and violence, " the authors of the open letter stated.

Perhaps the dramatic story of a Russian boy Sasha Frolov will help save other children in Norway who were separated from their families in the name of perversely conceived "child protection."