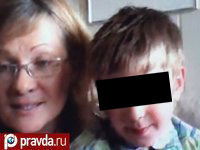 The story of Russian citizen Irina Bergseth (maiden name Frolova), who claimed that her Norwegian husband committed sex crimes against their 4-year-old son, received a dramatic development. Norwegian child protection agencies took Irina's two children away from her claiming that Irina was a mentally unstable individual. Irina presented medical assessment reports proving the opposite, but the agencies refuse to accept the documents. Irina's younger son has already been delivered to his father in spite of the fact that the woman accused him of pedophilia. As for the woman's elder son, a Russian citizen, it is possible that the boy will be accommodated in an orphanage.

We have already reported about the shocking story, which took place to a Russian woman in Norway. In January of this year, Irina's younger son shared shocking details of what his father had been doing to him during their meetings. Irina has received no assistance form the local authorities ever since. Moreover, the authorities made the woman a criminal in this story. Custody officers claimed that the woman was "socially dangerous to her children" and added that the children must be isolated from their mother.

Pre-trial hearings devoted to the fate of Irina's children took place yesterday. Irina's lawyer Maggi Rodvik presented the psychiatric report which did not confirm any serious psychiatric deviations with her client. In addition, special psychological tests, which were conducted to reveal whether Irina was suffering from any phobias, showed negative results as well.

Read article: Russian boy becomes sex slave to his own father in Norway

According to the lawyer, all of those conclusions were not taken into consideration by the court. For some reason, the opinions expressed by child protection agencies played the decisive role during the hearings. They claimed that Irina Bergseth was acting inadequately and could even kill herself or her children. It is not clear on which grounds those conclusions were made: social officers are not psychiatrists. However, the officers' main argument was the fact that Irina asked the Russian media for help. Child protection officers said that such a decision was proving the woman's "growing psychological instability."

It is worthy of note that Irina's children were taken away from her an hour before Russia's RTR TV channel started making "On Air" talk show devoted to Irina's story in Norway.

Irina's lawyer Maggi Rodvik stated that she had never come across such an absurd situation. However, she hopes that she will be able to defend Irina's right to raise her own children. The date of the court session has not been announced yet.

As it was mentioned above, the younger son was delivered to his father, whom Irina accused of pedophilia. In May, Irina received an official letter from psychologist Larisa Sazanovich, who specializes in helping juvenile victims of sex crimes. In the letter, the psychologist concluded that the child had received a psychological trauma, which could have been induced by violence committed against the boy by his father. In addition, Larisa attended the medical examination of the boy conducted by a Norwegian doctor. She heard the child's stories of what his father had done to him (Irina was not allowed to be present during the examination).

The lawyer presented all of those documents to the court, but the court did not take them into consideration either.

Irina's elder son has been sent to a foster home, where the boy will be staying before the final ruling. If the court does not find in Irina's favor, the child will be delivered to an orphanage. The boy, who was the best student at his class, does not go to school now, nor does he attend any of his auxiliary classes. The boy has been deprived of his habitual social environment completely and has been practically isolated. This is apparently how child protection services are trying to protect him from communication with his mother. It has been officially prohibited for the boy to both see his mother and communicate with her on the phone.

Irina's elder son will turn 14 in January. He will have to receive a Russian passport as a citizen of Russia. Several days ago, the boy wrote a letter to the Russian Embassy in Oslo with a request to assist him in returning to his mother. Acting Consul Mikhail Sidorkin said that the embassy prepared an inquiry to the Norwegian Foreign Ministry regarding the fate of the Russian child. Press-attache of the embassy, Vladimir Yusupov, said that diplomats will follow the development of the situation to prevent discrimination against the Russian mother.

One may not doubt about the fact that if Norwegian justice decides not to return the children to Irina Bergseth, the decision will most likely be based solely on the intention to help the children. Irina has recently received a letter from child protection services. The letter said that the woman would have a right to see the children twice a month, for three hours per meeting, in social officer's presence. Nevertheless, the father of the woman's younger son is not going to sit on his hands. The man intends to legally obtain sole custody of the child without his mother's participation at all.